Surviving the Trumpocalypse: Pop Culture Junk I'm Excited About in 2017 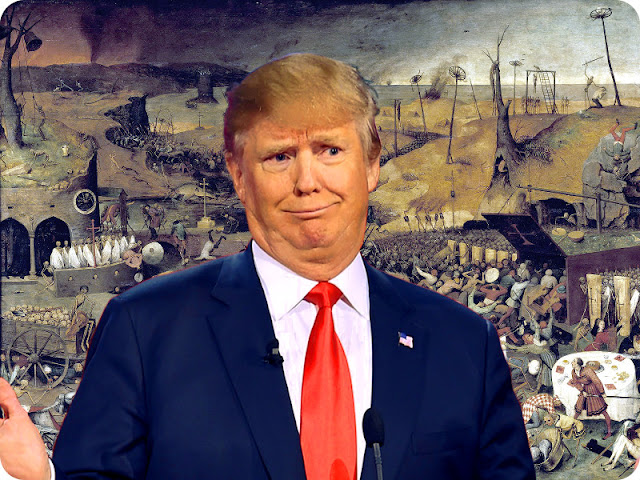 2016 was kind of a rough year for me.  In the pop culture landscape, the year began with the death of David Bowie, my favorite solo musical artist of all time, and ended with the death of Carrie Fisher, who played Princess Leia in the Star Wars films, and since I was (and am) a total Star Wars Kid, that hit me really hard.  In between, we saw the deaths of scores of other pop culture icons, such as Prince, and Muhammad Ali, and so many others.  Was it the worst year for "celebrity deaths" ever?  Technically, probably not, but it sure felt like it.  I also lost several family members in real life, which was an even more devastating loss for me personally.

Then there was the election of Donald Trump.  I don't want to get derailed into a political discussion, but let's just say that I think he's an evil scumbag, and leave it at that.  When I voted that Tuesday morning, all the polls and news sources we're predicting a win for Hilary Clinton and I was filled with optimism for the future.  When I turned the TV off late that night, Donald Trump was the President-elect, and I was filled with despair, and I pretty much spent the the rest of 2016 in a dark place.

But now 2016 is over, and as we stand on the onset of Donald Trump's presidency, I'm desperately trying to find something to look forward to in 2017.  So here it is, my list of "Pop Culture Junk I'm Excited About in 2017!" 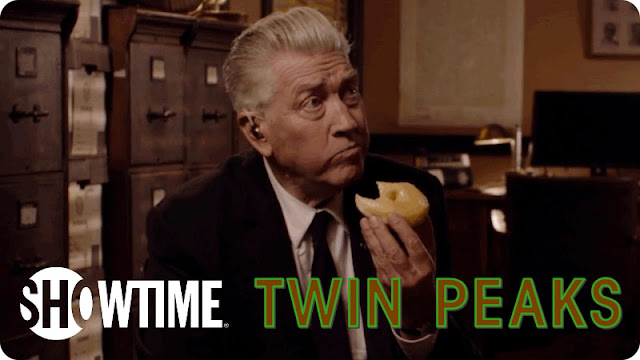 TWIN PEAKS  My favorite TV show of all-time is coming back after a quarter of a century!  A quarter of a century?  Jiminy Christmas, has it been that long?  Twin Peaks originally aired in 1990 and 1991, so yep.  Wow, I am getting OLD.  Still, gotta love the '90s.  Anyhoo, the series is coming back as a miniseries on Showtime this May, along with most of the original cast.  Every episode will be written by series co-creators David Lynch and Mark Frost, and every episode will be directed by David Lynch.  They filmed the entire series all at once, from one continuous script, like it was one long epic length movie.  Then they are going to take all of that footage and edit it down into 18 hour-long individual episodes.  It seems like a crazy way to film a series, but David Lynch is a genius, and giving him free reign to create a TV series like this -- unconstrained from the commercial considerations of broadcast TV -- is a really exciting prospect, and I can't wait to see what he comes up with.

As a toy collector, I was also excited to learn that Funko will be coming out with a line of Twin Peaks action figures this year.  They haven't announced the details yet.  They could be 6" figures or 3 3/4" figures, or maybe even something else, but any way, I'm all in.  This is one of those properties that I've wanted action figures of forever (or at least, a quarter of a century).  In addition to action figures, they will also be making Twin Peaks Pops and Rock Candy vinyl figures as well.  So, it's a pretty awesome time to be a toy collector and a Twin Peaks fan. 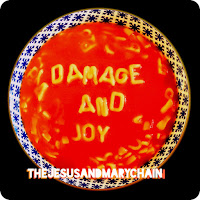 ROCK AND ROLL  The Jesus and Mary Chain are returning with their first album in almost 20 years.  "Damage and Joy" is scheduled to be released on March 25, 2017.  The Jesus and Mary Chain are one of my all-time favorite bands, and I'm really stoked to hear new music from them.  I saw them in concert in 1990 at the Universal Ampitheatre in Los Angeles.  The opening act was Nine Inch Nails who were still a new band promoting their first album, "Pretty Hate Machine." I remember telling my friends that I thought the Nine Inch Nails band was pretty good, but I thought they might need to replace their lead singer.  That lead singer of course, being Trent Reznor, the creative force behind Nine Inch Nails.  My bad.

Hey! Nine Inch Nails also have a new album coming out this year!  Other old favorites of mine with new albums this year include The Flaming Lips, At the Drive-In, Grandaddy, The Stone Roses and Gorillaz.  Woo-hoo, bring back the 1990s!

Many of my favorite movies are getting sequels this year.  Topping my list of most anticipated sequels:  BLADE RUNNER 2049.  Harrison Ford returns as Rick Deckard in a sequel to one of the greatest sci-fi movies of all-time, Ridley Scott's Blade Runner.  Ridley Scott is not directing this himself, but he is producing the film which has a script cowritten by one of the original Blade Runner screenwriters Hampton Fancher.

Ridley Scott, meanwhile well be releasing a prequel to his other great science fiction film Alien, entitled ALIEN: COVENANT.  This is Scott's second Alien prequel, and follows the events from the film Prometheus.  Prometheus received a bit of a mixed reception from some people.  I loved it, but a lot of people were expecting something scarier and closer in tone to the original film Alien.  However, word is that Alien: Covenant will be a scarier film, much closer the original.  Either way, as a big fan of both films, I am really looking forward to this. 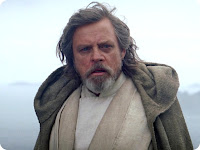 Another sequel to one of all-time favorites is coming with STAR WARS: EPISODE VIII.  The previous sequel Star Wars: The Force Awakens was a lot of fun, but was also really derivative of the previous films.  Hopefully this film will keep the spirit of the originals while also taking the franchise in a fresh direction.  The film has a really cool director in Rian Johnson who probably has what it takes to do just that.  The film will see the proper return of Mark Hamill as Luke Skywalker, whose appearance in The Force Awakens was basically just a cameo.  It will also sadly give us Carrie Fisher's final film performance as Leia, which she had completed filming before her death. 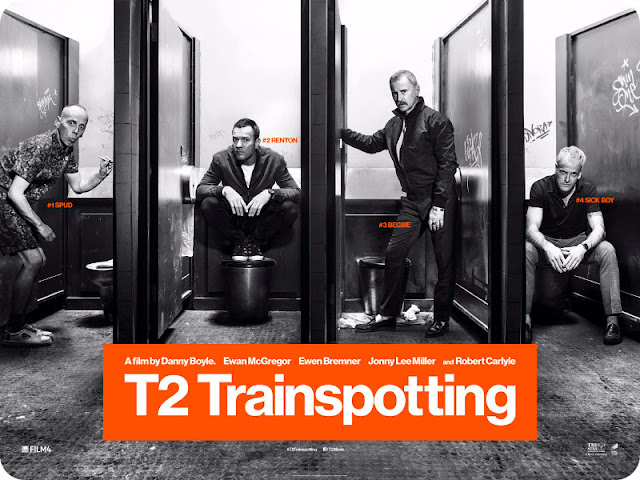 Also coming this year, a sequel that is not a superhero, sci-fi, or monster movie, but I'm still super excited about: T2: TRAINSPOTTING, the sequel to 1996's Trainspotting.  This was one of my favorite films from the 1990s and I saw it multiple times in the theater.  It was just so visceral, in-your face, with a great soundtrack, and so very much of it's time period.  It just felt so exciting and fresh, and as a young man in my twenties, I felt a real connection to those characters, like they were all my friends (even if they were all heroin junkies).  As a man on the brink of becoming middle aged (I turn 45 this year) it should be fascinating to see what these characters are like as they are hitting the same period in life.  Woo-hoo, bring back the 1990s!  Wait... I think I already said that.

Other favorite characters or films making making returns this year include: 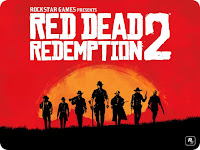 Watching "Westworld" on HBO was already giving me a hankering to go back and play one of my favorite games: the original Red Dead Redemption, and then Rockstar Games announced that Red Dead Redemption 2 would be coming in 2017.  They timed that one just right to stoke my anticipation.

Mass Effect: Andromeda
The latest Mass Effect game is another thing to get excited for, as that is another one of my favorite game series.

THE OUTER SPACE MEN
The Outer Space Men returned last year after several years hiatus, and while I was glad the line was back, the figures were all repaints or glow-in-the-dark variants of the previously released figures.  But it was recently announced that the line will continue in 2017 with four new characters.  First up will be Astrodite, the Space Woman from Venus.  Sketches and prototypes of this character have been around for several years, and now this character will finally be released, with three more new characters to follow.


FUNKO - BATMAN '66 and SATURDAY MORNING CARTOONS
I previously mentioned that Funko will be producing Twin Peaks action figures, but those aren't the only new figures they have coming that I'm excited about. They recently revealed that they will be making new DC Comics action figures including figures from Batman '66 with what they describe as a "bunch of villains!!"  Like the Twin Peaks figures, there was no mention of what scale these figures will be in.  I'm hoping they'll be in the same 3 3/4" scale they are using for their current line of DC Suicide Squad figures. They also mentioned a line of Saturday Morning Cartoons action figures.  No mention of which cartoons, but as a kid who grew up perched in front of my TV with a bowl of cereal every Saturday morning, I'm intrigued.

A fair bit of warning here, though.  Funko has a habit of occasionally announcing figures that for various reasons never end up getting made.  So maybe we shouldn't get too excited about these things until we actually see them for sale.

NEW TV
There are a ton of other TV shows coming out... too many to mention them all, but including the relaunched version of Mystery Science Theater 3000.  New shows like Altered Carbon, The Deuce, Legion, American Gods, Iron Fist, The Defenders, The Punisher, and Star Trek: Discovery.  And new seasons of Colony, Homeland, The 100, The Expanse, Bates Motel, The Americans, Stranger Things, and Fargo.

Well, that's some of the Pop Culture Junk that I'm excited about this year.  How about you?  Please write a letter to your local senator or congressperson and let them know what you are excited about.  Or let Donald Trump know by contacting him on Twitter!
Posted by Joshua Raymond at 11:18 AM No comments: