"Explorer - A Totally New Electronic Instrument in Musical Recording" was a demonstration record designed to show off "The Explorer" a musical instrument from Rocky Mount Instruments that seemed to be a hybrid between a traditional electric organ and a Mellotron.  This record first came to my attention thanks to WFMU's 365 Days Project.  The record is filled with a none-too-exciting collection of instrumental standards and melodies, with one exception; "Mr. Bach Meets Batman," which mashes up Neil Hefti's "Batman Theme" with Johann Sebastian Bach's "Toccata and Fugue in D minor" to spectacular effect.

Email ThisBlogThis!Share to TwitterShare to FacebookShare to Pinterest
Labels: Bat-Music


"True or False Face" and "Holy Rat Race" were the 17th and 18th episodes of the Batman TV show, airing on ABC March 9th and 10th, 1966.  The episodes featured the only appearance of the villain "False Face."  False Face was a master of disguise, whose true face was always disguised by an opaque plastic mask.  The opening credits listed "Special Guest Villain ? as False Face."  A man named "?" may seem strange to modern audiences, but in 1966, it could only mean one thing...  False Face was being played by ?, aka Question Mark, of the garage rock band Question Mark & the Mysterians, whose hit single "96 Tears" was the 5th most popular song on the Billboard Charts for 1966!  Rock on!!!


Alas, the end credits of the second episode revealed that the actor was actually Malachi Throne, aka "That Guy."  As in you know his face from a hundred different TV guest spots, but you never really know who he is.  You know, "that guy."


More screencaps after he break.

Read more »
Posted by Joshua Raymond at 1:23 PM No comments:

These were the second pair of episodes to feature Cesar Romero as The Joker.


In these episodes The Joker is released from prison, and buys a coin-operated machine company that makes things like pinball games, jukeboxes, and beverage and snack dispensers.  He rigs the machines at Dick Grayson's high school to dispense money, stocks and bonds instead of milk and candy bars.  For instance, insert a dime in the milk machine, and instead of a bottle of milk, you'll get $20 worth of silver dollars.  By doing this, The Joker hopes to dissuade the students form studying and working hard, and instead enjoy "easy living" which will eventually lead them to a life of crime.  It's up to Batman to convince the students that "nothing in life is free."  Meanwhile, Dick Grayson goes undercover as a juvenile delinquent in order to infiltrate The Joker's gang.

Read more »
Posted by Joshua Raymond at 9:55 AM No comments:


Frank Gorshin had a great career on the stage and screen before and after the Batman TV series.  He was most well known as a stand-up comedian and impressionist, but was also an actor who appeared in over 100 different roles on film and television. He also appeared on stage on and off Broadway, and even released a few singles as a singer.  He was an all-around performer.  So, when everyone else was releasing singles to cash-in on Batman's popularity, there was no reason for Gorshin to be left out.  His song, "The Riddler," is one of the catchiest and most fun of all the Batman novelty singles.  Below is a clip from his appearance on the Dean Martin Show, where he does some of his famous impressions of actors such as Kirk Douglas and Marlon Brando (this time with a Batman twist) before launching into a singing and dancing performance of his song.  Watch the whole thing, it's a lot of fun!

These were the first episodes to feature David Wayne as Jervis Tetch, aka The Mad Hatter.

The Mad Hatter is a villain obsessed with hats and headgear.  He begins a campaign to get revenge against Gotham City and Batman for testifying against him in court and sending him to prison.  So he kidnaps 12 citizens of Gotham (all who wear unique and distinctive hats), each one representing one of the 12 members of the jury that convicted him.  All of this leads to a scheme to steal the most famous headgear in Gotham: Batman's cowl, thus revealing Batman's secret identity and ruining his crime fighting career.


Read more »
Posted by Joshua Raymond at 8:26 AM No comments:

Bat-Music #11 - The Shapes - I Saw Batman in the Launderette

The Shapes were an 1970s English punk band that eschewed the anger of the Sex Pistols and the politics of the Clash for something more fun and with a sense of humor.  Evidenced by songs such as "Wot's For Lunch Mum? (Not Beans Again!)" and today's Bat-Music track, "I Saw Batman in the Launderette."

The Shapes - I Saw Batman in the Launderette


The Scaffold were a comedic rock band from Liverpool who are mostly remembered these days because one of their members was Mike McGear (aka Peter Michael McCartney aka Paul McCartney's brother).  They wear pretty successful in England during the '60s and '70s, though, and had several hit singles and released a handful of albums.  Their second single, released during the height of Batmania in 1966, was "Goodbat Nightman," a wonderfully weird tribute to the Dynamic Duo.

Posted by Joshua Raymond at 10:05 AM No comments:

50 years ago...
The 12th episode of the Batman TV series, "When the Rat's Away the Mice Will Play," aired  February 17th on ABC TV. It continued on from the cliffhanger ending of the previous episode, "A Riddle a Day Keeps the Riddler Away."


After escaping from the Riddler's death trap, Batman and Robin decide to let the Riddler continue to believe they are dead, so they can catch him unawares in his latest crime.


Bat Facts for When the Rat's Away the Mice Will Play

Read more »
Posted by Joshua Raymond at 1:52 AM No comments:

"Rasputin: The Mad Monk" and "The Reptile" Released 50 Years Ago Today 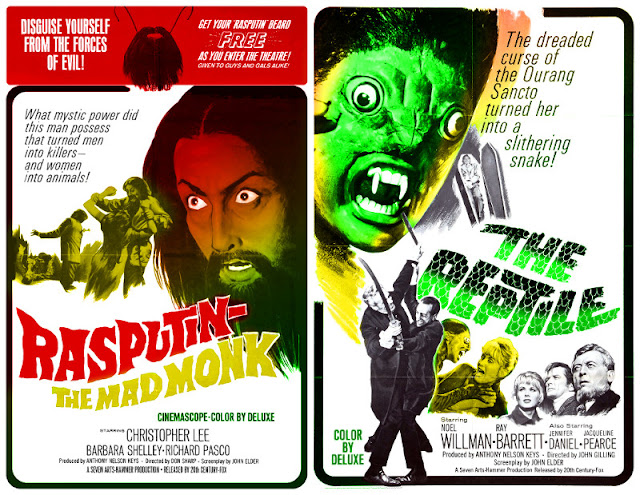 Released 50 years ago this month...
The Monks - Black Monk Time

The Monks were aggressive, grade-A weirdos.  Dressed in all black, with short monk tonsure haircuts and nooses for neckties, they went completely against the grain of the flower child looks and attitude of the time.

Their album "Black Monk Time" follows suit. It has pounding drums, repettive rhythms, chanted or shouted vocals, and dadaesque lyrics that are anti-war, anti-establishment, and just plain antisocial, it sounded like nothing else in 1966, and is still unique to this day.  This music was completely uncommercial, and left audiences in the 1960s confused and upset, prompting one audience member to attempt to strangle guitarist/vocalist Gary Burger at a show in Hamburg, Germany.

Over the years the band has gained a dedicated cult following, and they are now one of the most influential and respected bands of the 1960s garage rock genre.