These were the first episodes to feature Victor Buono as Professor William McElroy, aka King Tut.  Unlike all of the previous villains, King Tut was the first to be created specifically for the TV series.  Professor William McElroy was an Egyptologist who came to believe he was the reincarnation of King Tut after being struck in the head, and then went on a spree of ancient Egypt themed crimes.  There are some fun action scenes in this episode.  One stunt has Bruce Wayne being strapped to a runaway gurney as it races downhill towards a cliff.  Batman and Robin also get in to sword fights with the Egyptian themed villains.  It's also the second time on the series where Batman dances the Batusi. 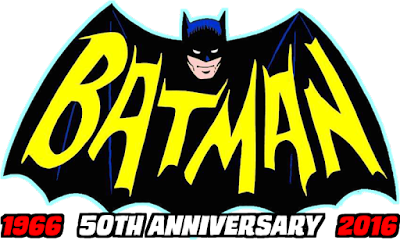 Read more »
Posted by Joshua Raymond at 8:17 AM No comments:


Combo Kings... I know pretty much nothing about this band.  There was a band known as "The Combo Kings," or "Pervis Herder and The Combo Kings" in the early 1960s that put out a couple of singles. I think this is the same band.  Honestly, I don't know.  But in 1966, the single we'll be listening to today was released.  It's "Do the Slow Fizz" by Combo Kings, with the b-side "Batman A Go Go."  Both tracks are danceable, funky slabs of Philly Soul.  Slow Fizz is the superior track, but Batman A Go Go has that Batman novelty value that makes the record memorable to this day.  Let's check them out...


Combo Kings - Do the Slow Fizz


Posted by Joshua Raymond at 9:11 AM No comments:

Fresh Monkey Fiction's Amazing Heroes quickly became one of my favorite toy lines when I received my first set of action figures earlier this year.   The  figures were made in the style of 1980s superhero action figures, such as Mattel's Marvel Secret Wars figures.  Amazing Heroes featured mostly public domain characters from the Golden Age of Comic Books in the 1930s and '40s, but with a couple of newer licensed characters as well.  Check out my reviews for the Series 1 figures:

Now Fresh Monkey Fiction are back with a new Kickstarter campaign for Series 2 of this awesome retro superhero line.   Again, it's mostly classic Golden Age characters, but with a few licensed characters as well.

The licensed figures in Series 1 were Captain Action, who originated as an action figure in the 1960s, and Madman, Mike Allred's classic indie comics superhero.

For Series 2, Madman is back, this time in his "Cosmic Madman" outfit.  He also comes with an alternate David Bowie tribute head that is too cool.  I might have to buy a second Madman figure so I can display both heads.

Next up is Nexus, Mike Baron and Steve Rude's sci-fi superhero who debuted in comics in the 1980s.  I've always thought that Nexus was one of the coolest looking indie comics superheroes, and it's great to finally have an action figure of this cool character.

The final licensed figure is Mike Grell's Jon Sable.  Jon Sable was a freelance mercenary who first appeared in the comics in 1983.  Like Nexus, this is Jon Sable's first appearance as an action figure.  This is another comic character that I have fond memories of from when I was a kid in the '80s.  I might have to start digging around through my comic collection and pull out some old issues to reread.

Of course, the bread and butter of the Amazing Heroes character from Series 1 were the Golden Age comic book characters, and it's no different for Series 2.  Series 2 has the heroes American Crusader, Wonderman, and Captain Future, and the villains Blackout and The Puzzler.  There is also a Puzzler Henchman figure, which would make a great "army builder" figure for those that are in to that.

There is also one original character: Chrometurion.  I think the folks at Fresh Monkey Fiction came up with this guy as an excuse to do a shiny silver looking figure (which is kind of reasonable, I guess?).  He's a blank silver figure with a black cape, and seems to be filling the slot that "The Blank Slate" held in Series 1.

That's all the figures that are officially part of Series 2, but there will also be stretch goals if the Kickstarter exceeds it's minimum requirements.  The first one is The Black Bat, who is a bad ass looking pulp fiction hero, in the same vein as The Shadow, or his contemporary character from DC Comics: Batman.

And Fresh Monkey Fiction promise there will be more stretch goals to come, as the Kickstarter progresses, so stay tuned for those.

If you haven't already, go check out the Kickstarter page at www.freshmonkeyfictionkickstarter.com and go see it all for yourself!

Posted by Joshua Raymond at 11:11 AM No comments:


"Send Batman to Viet Nam" was a popular meme (or whatever the 1960s version of a meme was) in the Vietnam Era, appearing on pins and buttons alongside other images and phrases like the peace symbol, "make love, not war," "draft beer, not students," and "war is not healthy for children and other living things."  It became a song in 1967 when the Seeds of Euphoria recorded "Let's Send Batman to Viet Nam."  This is a folk song, but it's hard to tell if it is an anti-war protest folk, or just a novelty song trying to cash-in on two subjects looming large in the culture at the time.  The same record label released "Conscientious Objector," a song that condemned conscientious objectors and war protestors, so I'm thinking "Let's Send Batman to Viet Nam" might be more of the same.  Give it a listen and tell me what you think, is this song pro or anti the Vietnam War?

Posted by Joshua Raymond at 3:34 AM No comments:

In previous installments of Bat-Music, we've looked at the records that Batman stars Adam West, Frank Gorshin, and Burt Ward made to cash in on their new-found Batman fame.  Today, we'll be looking at "The Penguin" actor Burgess Meredith's attempt.  While he was primarily an actor, Meredith did have a few records under his belt prior to the 1966 Batman TV series.  His records tended to feature a combination of singing and spoken word and included such titles as "Songs and Stories of the Gold Rush,"  "Burgess Meredith Sings Songs From How The West Was Won," and "Burgess Meredith Reads Ray Bradbury."

Here's "At the Miners' Ball," a track from Songs and Stories of the Gold Rush:

Burgess Meredith - At the Miners' Ball


For his obligatory musical cash-in on the popularity of Batman, Meredith recorded a two-sided single in his persona as The Penguin: "The Capture," and "The Escape."  Both tracks feature the same music, with Meredith sing-speaking over the music William Shatner style, spinning a story of the Penguin's Capture by the Batman, and his subsequent escape.

Posted by Joshua Raymond at 6:08 AM 2 comments: