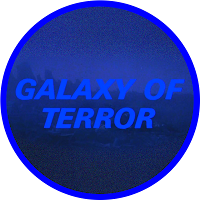 A campy and colorful parody of the James Bond films, starring James Coburn as Derek Flint.  Flint takes James Bond's über-competence and cranks it up to a ridiculous degree.  He speaks 45 languages, is an Olympic medalist, and is an expert in everything from judo to ballet.  It's basically just one joke repeated over and over again throughout the film, but the film still works, largely due to the charm and star power that Coburn brings to the role.

Dracula: Prince of Darkness is the third film in Hammer's "Dracula" series.  The first film had Dracula, played by Christopher Lee, squaring off against Professor Van Helsing, played by Peter Cushing, and ended in Dracula's death.  In the second film, Dracula remained dead, and the the film starred Cushing's Van Helsing fighting a new vampire threat. In the third film, Cushing is out, but Christopher Lee returns, as Dracula is resurrected to bite innocent necks once again.

The biggest question I had going in to Star Wars: The Force Awakens was whether or not it would feel like a "real" Star Wars movie, like the original trilogy which are some of my favorite films of all time.  Or would it be more like the prequels, which I found to be so deeply disappointing.  And I'm glad to report that yeah, The Force Awakens very much does feel like a "real" Star Wars movie, whereas the prequels didn't.  But that turns out to be both it's strength, and it's weakness...

Return of the Jedi (1986) Despecialized Edition

This is the version of the movie as it originally was shown in the theaters in 1986, before George Lucas made all of his "special edition" changes to it.  "Jedi" is is probably the weakest of the trilogy, but even if it's not perfect as a stand-alone film, I think it's pretty great as an ending if you are marathoning all three at once.  I used to hate the Ewoks, but I've actually grown to appreciate them more over the years.  Sure, they're overly cutesy little teddy bears, but they're killer cannibal overly cutesy little teddy bears.

Star Wars I-III: A Phantom Edit is a fan made edit that takes all three of the Star Wars prequels and edits them down into a single movie.  They cut out almost all of the appearances of Jar-Jar, the political debates, trade disputes, midichlorians, and fart jokes.  Instead, the focus is squarely on the rise and fall of Anakin Skywalker.  A few of the edits are a little obvious and disorienting, and some of the wooden acting performances and stilted dialogue remain, but overall it works very well.  Anakin and Padme's relationship seems much more natural and unforced.  Anakin himself comes across less as a creep and a whiner, and more as a tragic figure who starts out as a good man, but is manipulated and mistreated by those around him until he slips into darkness.  On their own, I find the the prequels practically unwatchable, but this edit turns them into something that I actually enjoy.

The Empire Strikes Back (1980) Despecialized Edition

This is the version of the movie as it originally was shown in the theaters in 1980, before George Lucas made all of his "special edition" changes to it.  It doesn't matter how may times I watch this movie, when Darth Vader tells Luke Skywalker "I am your father," it's like I forget how to breathe for a minute.  And heck, I read the official Empire Strikes Back novelization when I was a kid before I saw the movie, so it wasn't even a surprise to me the first time I saw it.  But still, every time I watch it, it takes my breath away. My favorite of all the Star Wars movies.

This is the version of the movie as it originally was shown in the theaters in 1976, before George Lucas made all of his weird changes to it.  I remember emerging from the movie theater when I was 4 years old, after seeing it for the first time. Going in to the movie I was skeptical. I thought it would be a cross between Star Trek, which I loved to watch on TV, and an old World War 2 movie, which I wasn't a fan of at that age. But I left the darkened theater swinging around an imaginary lightsaber, convinced I had just seen the greatest movie ever made. And every time I've seen it since then, I become that awestruck 4 year old all over again. I wasn't expecting much from Humanoids From the Deep.  I mean, it stars Doug McClure for Pete's sake....... that's not exactly the "Good Housekeeping Seal of Approval."  But still, I was surprised by just how bad this movie was.  The production quality of this film was really cheap.  So cheap, that when I first watched it, I thought to myself, " Hey, I didn't know this was a low budget made-for-TV movie!"  And then the Deep Humanoids started tearing off women's clothes and raping them.  It looked like they spent the entire production budget on boobs.

Wild Zero is has got to be one of my favorite movies of all time.  It's about an aspiring young rock 'n' roller named Ace, who's just finding his way in the world.  He wants to be the next big rock star, and he's got his rock 'n' roll look down pat, with his leather jacket, motorcycle, and greasy hair.  He's even met a cute young girl who might be his one true love.  Now he just needs to learn to, you know, play the guitar.  But just when things look like they are going his way, flying saucers invade the skies, triggering a "Plan 9 From Outer Space" style zombie outbreak!  Plus that girl he fell in love with?  Turns out she's got a penis.  The situation would be hopeless for anyone else, but Ace has an "ace" up his sleeve:  a magic whistle that calls his favorite rock 'n' roll band, Guitar Wolf!  With the help of Guitar Wolf and the power of rock 'n' roll, those zombies and flying saucers don't stand a chance! 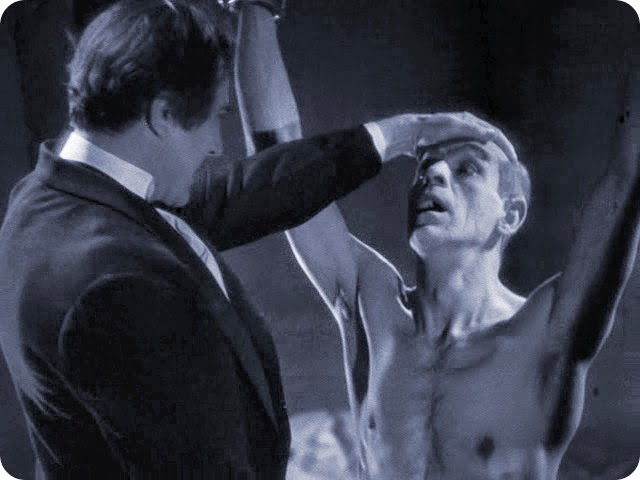 Boris Karloff!  Bela Lugosi!  Together in what might be the finest picture that pits the two against each other, a story about a Satanic cult, "inspired by" Edgar Allan Poe's The Black Cat. 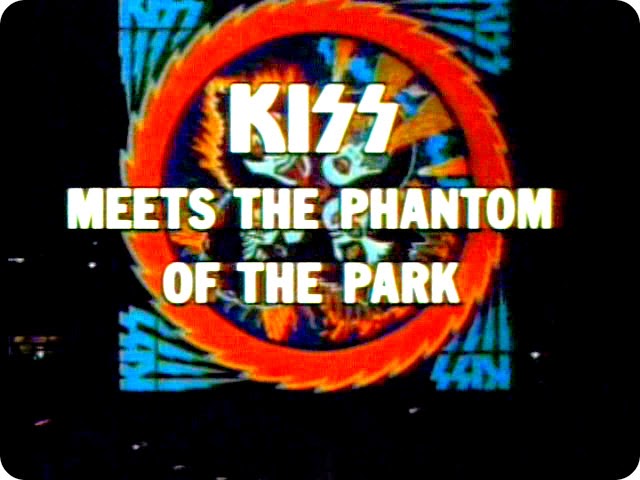 In 1978, at the height of their popularity, rock band KISS made their feature film debut in KISS Meets the Phantom of the Park.  In the film KISS play a super-powered version of themselves as they fight an army of evil androids and unravel a missing-persons mystery at a failing amusement park.  But don't worry, all that doesn't stop them from performing a series of concerts and treating us to several classic KISS songs.  Does this movie sound awesome, or what?  Wait, did I mention it's a super low budget made-for-TV movie, produced by Hanna-Barbera (the same guys who produced Yogi Bear and Scooby Doo)?  Yeah, "awesome" might not be the right word to describe this flick.  Read on to find out what word is... 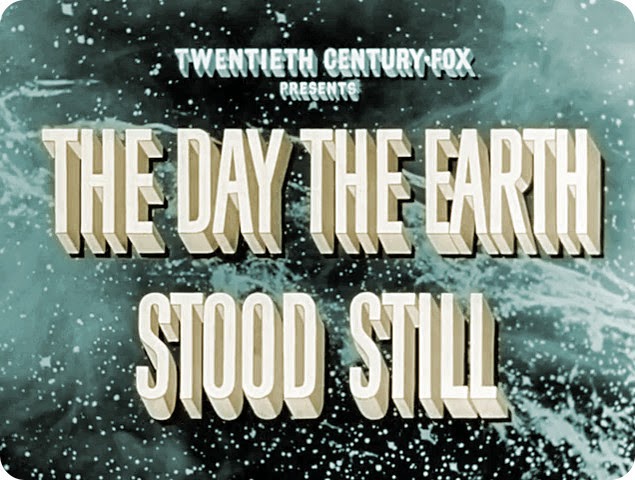 Stop me if you've heard this one before...  A supernatural being takes the form of a human Carpenter, and lives among the people.  He has come to Earth to deliver a message.  A message about putting  one's faith in a higher power.  A higher power that can lead to humanity's salvation if it is heeded, or it's damnation if it is not. However his message is met with disbelief, suspicion, and fear, and the people turn against him and kill him.  But miraculously, after his body is brought to his tomb, the man is resurrected.  He delivers one final message to his gathered followers before ascending into the heavens.  Sound familiar?  Wait, did I mention the fact that the man is a space alien named Klatuu, the tomb is a flying saucer, and the higher power is an unstoppable killer robot named Gort?  No, this isn't the secret theology of the Scientologists.  It's the plot of the 1951 sci-fi film, "The Day The Earth Stood Still!"

Weird, ugly little monsters go on a terror and killing spree in a small town on Christmas Eve.  It should be a Creepmas classic, but it falls a little bit short, in my opinion.  I mean, don't get me wrong, I like it.  It's a good movie.  In fact, it reminds me quite a bit of the famous Mars Attacks trading cards from the 1960s, with it's dark humor, violence, and kid appeal.

I love Frankenstein movies (see my reviews of the original Frankenstein, and it's latter day successor Deadly Friend for some examples).  I also love weird sci-fi and violent action movies.  So naturally, I'm a big fan of Robocop.

Alien rape monsters are on the loose in 1986's Breeders.  Breeders is cheaply made, sleazy trash.   It features amateurish acting, a monster in a cheesy rubber suit, low quality gore effects, and tons of naked women, in a story about alien parasites that rape virgins.  Sometimes, movies like this can be so bad that they are good.  Other times, they can just be boring, offensive, and no fun to watch.  This one has a bit of both... but mostly, it kind of sucks.

Nightmare City (also known as City of the Walking Dead) is a cheaply made Italian/Spanish zombie movie, one of many that were made in the wake of the success of George Romero's classic Dawn of the Dead.  Strictly speaking, I suppose the monsters in this film are not technically zombies, but radiation mutants.  I think I'll call them "Zomboids." 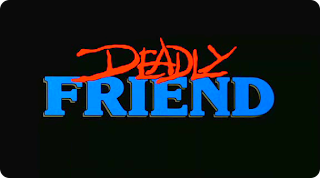 Deadly Friend is an odd movie.  It starts off as a 1980s teen romance picture, about a boy genius who wins the heart of the cute girl next door, with the help of his adorable and funny robot.  Sort of like what Short Circuit would be like if it was directed by John Hughes.  But Deadly Friend wasn't directed by John Hughes... it was directed by Nightmare on Elm Street's Wes Craven, and it is full of just as much violence, gore, and horror as it is of awkward teenage romance and cute robot hijinks.