While I was thrift store shopping for cool toys the other day I came across a big sack of M.U.S.C.L.E. men.  They aren't something I normally collect, but there were 53 M.U.S.C.L.E.guys, plus a few other figures, all for less than 3 bucks.  At that price, I couldn't resist.  I set them up on an Imaginext Space Station playset that I bought at the same store for less than 4 bucks.  Check them out after the break!

Read more »
Posted by Joshua Raymond at 2:33 AM No comments:

Hi kids!  I stopped in to my local 99 Cents Only Store yesterday, and found some fun stuff to post in ye olde blogge.  So without further ado...

One of the first things I noticed at the 99 Cents Store was that they already have Halloween products on their shelves, and it's only July!  Can you believe it?  Don't get me wrong, I'm not complaining.  Halloween is far and away my favorite holiday.  Heck, if it was up to me, Halloween would be once a month, not once a year.  They don't have their full selection of Halloween items yet, as half of their seasonal section is still full of Summer-themed items like cheap sunglasses and beach balls, but they still have a lot of stuff.  They have a whole aisle section of weird Halloween candy, like gummi eyeballs and lollipop skulls, as well as another section with a small assortment of rubber masks and costume pieces.  I don't need any of that stuff, but I wasn't going to leave there empty handed, so I picked up a couple of these...

What the heck are those guys?  Find out after the break!

Read more »
Posted by Joshua Raymond at 7:52 AM No comments: 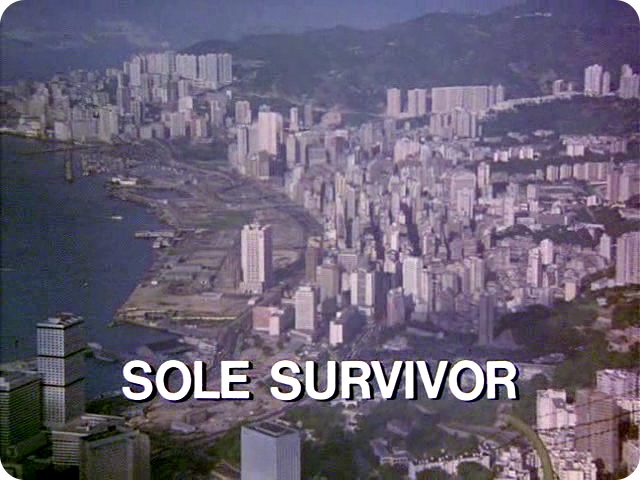 "Sole Survivor" is an interesting episode of the Hardy Boys.  It opens with Joe Hardy slipping in and out of consciousness in an ambulance after some kind of accident.  He finally wakes up in a hospital in Hong Kong, and is told that he has been in a coma for a year, and that his brother and father are dead.  Heavy stuff.  Of course, since the show wasn't retitled "The Joe Hardy Mysteries," it won't come as a surprise that all is not as it seems.  But it's still interesting to watch Joe as he reacts to his new circumstances, and then starts to unravel the mystery.

The style and tone of the episode is also a bit different than usual.  It kind of seems like a cross between a film noir and an Italian giallo, albeit one filtered through a 1970s television sensibility.  In particular, there's a few scenes that take place in an closed clothing store in the dark, with the rooms full of shadowy mannequins, that were just a violent stabbing away from being part of a Dario Argento flick.


Eventually we check in with Joe's brother and father, Frank and Fenton.  Just as Joe was told that they were dead, they believe that he is dead, after his car is fished out of a river, but no body was found (they believe it washed out to sea).  It's kind of weird, because the show has the brother and father react not with tears or grief, but with extreme stoicism.  They lay on their hotel room beds fully clothed, with the lights on, just sort of staring into space, and then Fenton grits his teeth and basically says that they are in Hong Kong with a job to do, and they can grieve for Joe after they finish it.  I guess in 1978 this was supposed to show Fenton's strength of character, but by modern standards it seems unfeeling and f---ed up.  It wouldn't hurt your masculinity to show some emotion, and maybe give your son Frank a hug, Fenton!

Overall, I found this to be decent episode, and the focus on Joe having to unravel a mystery on his own was a nice change of pace.

Read more »
Posted by Joshua Raymond at 2:23 AM No comments: