My Trip to the Flea Market 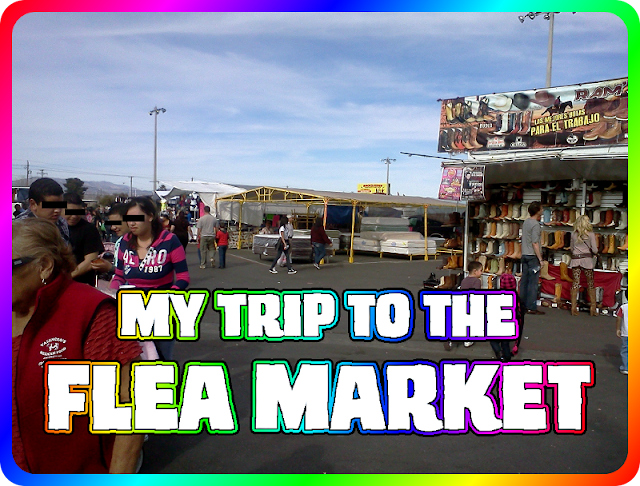 When I buy used and vintage toys, I typically either buy them online from eBay or locally in Las Vegas from Savers thrift stores (there is one in walking distance from my home, and another about a block from where I work).  However, I keep seeing awesome stuff online that people find at flea markets and swap meets, plus I have fond memories of the swap meets I used to go to as a kid in Southern California.  I used to always find weird and wonderful stuff at them.  So, the other week I had a Saturday off of work and I decided to take a trip to "Broadacres Marketplace and Event Center," the big flea market/swap meet here in Las Vegas.

So I headed across town to Broadacres, which is actually not in Las Vegas itself, but in the city of North Las Vegas (yes, the city directly north of Las Vegas is creatively named "North Las Vegas").  When I got there, I found the place was really crowded, with tons of families and little kids running around everywhere.  I figured that was a good thing, though.  If this place was that popular, there must be some good stuff to be found there.  I spent a few hours walking around the grounds, checking out all of the booths.  They've got a lot off odd junk for sale there.  The big thing I noticed were tons of booths selling jeans designed to make a women's butts look big.  I guess when a woman asks you, "do these jeans make my butt look big," you're supposed to say "yes" now?  When did that happen?  Anyhow, besides the big butt jeans, they're were lots of other cheap looking t-shirts, jewelry and other clothes for sale.

I saw some no-name big screen plasma TVs for sale, but I can't imagine what your motivation would be to buy a TV at a swap meet when you can get them so cheap a Walmart and whatnot these days.  There was even some used car dealership inside the swap meet selling cars and trucks.  I also saw tons of rusted broken down looking tools piled everywhere for sale, that honestly looked to me like stuff that was dug out of the trash.  In fact, a lot of the stuff I saw for sale, I mean, at least half, looked like absolute junk, like something that someone had left on the curb for the trashmen to pick up.

There were several different vendors selling peanuts that were being freshly roasted out of like, old oil drums or something.  The smoke coming from those things gave me a headache.  But I noticed that all the people who were buying those nuts had big smiles on their faces, so I guess those peanuts must be pretty good.  There were also lots of opportunities to buy churros, cold beers, and other snacks and drinks, plus a whole area off to one side with a variety of food booths.  And there is an area with tables and chairs were you can eat while watching live music.  I guess it's usually, like, Mexican Mariachi or Tejano music (I don't really know much about this type of music, so forgive me if I'm not labeling it correctly), but they occasionally have rock or country music as well.

But What About The Toys?

But what about the toys, you ask?  After all, that's what I was looking for.  Well, there actually were lots of toys for sale.  There were many vendors selling new toys, but they were pretty much all crap toys, like generic wrestlers, boxes of shoddy looking bootleg superhero action figures that had Marvel, DC, and Dragonball characters all in the same package, or really cheap stuff that you can find at dollar stores.  However, there was one booth that had vintage and new carded action figures.  They had some modern DC Direct action figures, some classic Teenage Mutant Turtle figures, and a ton of The Simpsons toys.  They didn't have anything that was looking to collect, though, which was a bummer, but the prices I saw all looked pretty good for this stuff.

Aside from that, though, there were lots of people selling loose toys and action figures.  Some booths were nothing but toys, some were a little bit of this, a little bit of that, with toys scattered among everything else they were selling.  Quite a few booths just had a bucket full of loose action figures sitting in the front of their booth that you could dig around in to see if you could find anything cool.  Most of the toys I saw were junk, like broken Happy Meal toys and things like that.  But, with so many loose toys to go through, I figured I could probably find a few hidden gems hidden among them.  I had visions dancing around in my head of finding some cool vintage toys, like Super Powers, Masters of the Universe, Mego figures, or maybe some vehicles, or playsets (especially a Batcave, how cool would that be?), or maybe some cool newer toys as well, who knows?  So I spent several hours walking up and down the marketplace, making sure I checked every booth there was for cool toys.  At the end of the day, I was exhausted, sweaty, had a killer headache, and my feet hurt.  But, all that would be worth it if I found some awesome toys, right?  Well, here's what I left with:

Two Batman action figures.  Now, don't get me wrong, I'm always happy to add a few more Batmen to my toy collection.  But I routinely find figures just as good at the thrift store by my house.  This was SO not worth all the time and energy I expended, just to come out with these two toys.  Yes, I would probably have paid twice as much for them I had bought them on eBay, but I could have done that at home, while sitting on my ass, and not waste half of my day doing it.  So, I don't know, maybe I just went on a bad day?  Maybe, I just had unrealistic expectations?

That same day, feeling disappointed with my shopping trip, I decided to walk to the Savers by my house.  Ten minutes later, I was walking out the door with this awesome Imaginext Batcave:
A Batcave!  Yes!  It was missing all of the loose pieces, but I was okay with that, it's still really neat!  Plus, it turns out that Mattel sells replacement parts for some of their toys from their website, so I placed an order for those, and I'll make a more detailed post about this Batcave when those pieces arrive.  I'm going to end up having the complete Batcave for about 1/4th the price of a new one.  Sweet.

So in conclusion, the flea market sucked, but the day was saved by a visit to the thrift store.  So hooray for thrift stores!

Postscript:  You know what's sad?  Despite the fact that I had a horrible time at the flea market, a part of me still wants to go back!  Those visions of elusive toys still keep dancing around in my head.  If I do go back, I'll make sure and try those roasted peanuts.  I'll probably pass on the big butt jeans, though.