In Silent Running, all plant life has been killed off on the planet Earth, but it's last samples of plant life have been preserved for eight years in a group of biodomes attached to space freighters in outer space, orbiting Saturn.  Bruce Dern plays Freeman Lowell, a botanist who has lived on one of the freighters and cared for the plants for the entire eight years.  He shares the ship with three other astronauts who take care of the rest of the ship, but they only serve 1 year terms before rotating out, and they don't care about the plants the way Lowell does.  One day they receive orders from Earth that their mission has been cancelled.  They are ordered to destroy the domes and return home.  The three astronauts are happy to be finally done with this project and go home, but Lowell is horrified at the thought of destroying the last remaining plants, and stages a mutiny to try and save them.

That's a pretty good premise for a science fiction film. The film itself is a mixed bag, though.  There are some things it does a good job at, most notably the model work for the space freighters and biodomes, which look pretty good for the time.  That's no surprise, because the film was directed by Douglas Trumbull, who did special effects on such films as Blade Runner, 2001: A Space Odyssey, Star Trek: The Motion Picture, and Close Encounters of the Third Kind.  But for the most part, the film's kind of a misfire.  Find out why after the break.


The biggest problem with the film is that it is way too rooted in the year it was made: 1972, and those elements haven't aged well, at all.  First there is the Silent Running theme song, which is a horrible, horrible example of overly earnest, easy listening folk music.  It's not cool folk music, like Bob Dylan, that has some bite to it.  This sounds like a folk song that was written by a committee of advertising executives to sell deodorant to housewives, and sung by someone's creaky old grandmother who is trying to seem cool to her grandkids.  This wouldn't be that bad if you only had to listen to it in the opening credits, but they play the song in multiple montages throughout the movie, and each listening is more excruciating than the last.  After the movie, I watched the closing credits so I could see who sung it, with the thought that I could hunt her down and pour broken shards of glass down her throat, to shred her vocal cords and prevent her from ever singing again.  I was shocked to see it was Joan Baez.  I thought she was supposed to be good?  One of the best folk singers ever, even?  Well, apparently I thought wrong, because she's actually a piece of shit.  Fuck you for singing this song, Joan Baez.  Fuck.  You.

The rest of the music isn't any better.  The score sounds like library music, rather than music written specifically for the movie, and it rarely compliments what is going on onscreen, and is often a distraction, taking you out of the movie.

Bruce Dern's character is a long haired hippie named "Freeman" who only eats food he has grown himself, questions authority, and longs to return to a simpler time when people were connected to the Earth and soil.  The three astronauts are straight-laced establishment types who enjoy racing cars, eating fast food, and follow any orders they are given from Earth without question.  It's just too on the nose, there's no subtlety to these characters.

In order for Freeman Lowell to save his plants, he is going to have to kill of the other three men on the ship.  This should have been the most exciting part of the movie, with Lowell stalking the men through the ship and picking them off one by one.  It would have been like Alien crossed with The Most Dangerous Game.  Alas, this was 1972, and the they were more interested in singing folk songs and preaching to the audience about the environment then entertaining it, so the other three astronauts are disposed of very quickly.  Lowell gets into a fight with one of them, they roll around in the dirt, and then he finally chokes him, and leaves his body laying on the ground.  He then shuts the airlock on the dome that the other two were planting bombs on, and launches them into space.  That's it.  There was a brief spot of excitement later in the film, when Lowell remembers that he left the first body laying in the dirt.  I was all set to find the body missing, thinking that astronaut had survived and was hiding somewhere, ready to come after Lowell.  But nope, Lowell checks on him, and he was still there, still dead.

The next part of the film should also have been pretty interesting.  With Lowell, having committed three murders, and now alone on the ship, cut off from humanity, slowly going insane.  They do brush up against this, to some extent, as Lowell does start to deteriorate mentally, leaving trash all over the ship, talking to the robot drones on the ship like they were people, and even neglecting the plants that he risked everything to save.  But they could have mined this a lot deeper than they did, instead it's mostly all on the surface.

So overall, I found the film to be a disappointment, more interesting for the premise than for the movie itself.


HOW I WOULD FIX IT

Even though I didn't really like this movie, it did make an impact on me, and I spent quite a bit of time after watching it, thinking about how it could be improved.  Here's what I came up with. 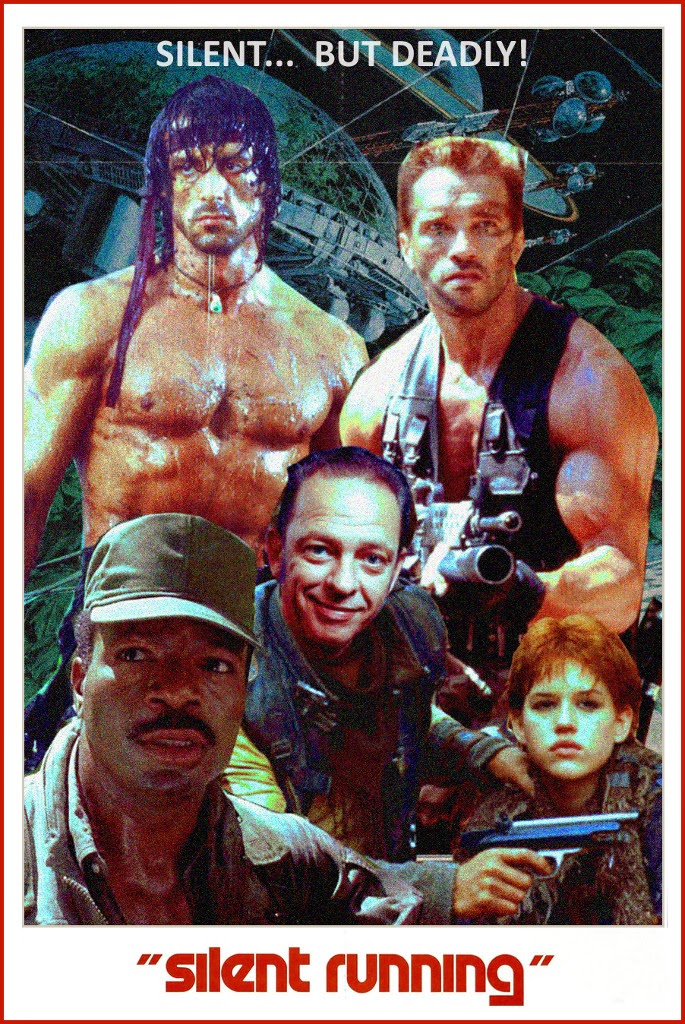 The Year:  Let's face it, unless you're into soft rock, granola, bell bottom jeans, and the color brown, 1972 is just kind of lame.  So let's imagine that this film was made in a time when sci-fi movies were more action-packed, colorful, and awesome.  My pick: 1985.

The Director:  I've got nothing against Douglas Trumbull, heck we can keep him on to do the special effects.  But I don't think directing movies is his strong point.  This film needs someone who is comfortable with spaceships, action, and horror.  My pick: John Carpenter

The Actors:  Replacing Bruce Dern in the role of Freeman Lowell, I would choose... Sylvester Stallone.  Stallone's character John Rambo was also a long-haired, authority questioning rebel who was comfortable living in a forest or jungle, so he would be perfect for this role.  In fact, we could change his name from Freeman Lowell to Freeman Rambo, and make him a descendant of John Rambo, how awesome would that be?   For the roles of the militaristic astronauts he has to square up against, I would choose Arnold Schwarzenegger, Carl Weathers, Molly Ringwald and Don Knotts.

The Music:  I would replace Joan Baez with someone who was able to address the same emotional depths and beauty that she was known for, but without sounding so annoying and preachy like she did in this film.  I'm thinking Billy Idol, or maybe Twisted Sister.

The Plot:  I would keep the plot more or less the same, except I would beef up the exciting parts, tone down the boring ones, and add a couple of exciting twists.

The film would start off more or less the same as before.  But while Sylvester Stallone as Freeman Lowell Rambo would still be the protagonist, I would try to make the other astronauts more sympathetic characters.  I would spend more time with them, letting the audience know that they had friends and families back home that they wanted to return to.  I would also add a comic relief character (Don Knotts), and a female astronaut (Molly Ringwald) who could act as a romantic interest / love triangle for both Stallone and Schwarzenegger's characters.

After the crew gets orders to destroy all the plants and return home, Stallone would try to convince the another astronauts to disobey the order.  When this failed, he would start to hunt them down and kill them one by one.  In the original film, this was done quickly, but in the improved version, this would take up half the film and be filled with violent action and nail-biting suspense.  The one character Stallone would spare would be the one played by Molly Ringwald.  Since he is in love with her, he doesn't kill her.  Instead, he locks her in one of the biodomes, and seals it off, where she is forced to live off the land, and maybe starts to go a little crazy from the strain.

The second half of the film would involve Stallone's character, alone on the ship, slowly  and steadily going insane, unable to cope with what he had done.  I see this similar to the way Jack Nicholson went insane in the Shining, only more awesome because it's in space.

Then I would pull the first twist.  In the original film I briefly got excited when it seemed like one of the astronauts might have survived, and could be coming after Freeman.  Well, in the improved version, that's what would happen.  And, it would be the deadliest, most intimidating astronaut of them all: Don Knotts!  It turns out that Molly Ringwald nursed him back to health.  No longer the comic relief, Knotts is now pissed off and out for blood.  What follows is a long, protracted, bloody battle between the two equally-matched foes.   It would end up with Stallone locking Don Knotts in the biodome with Molly Ringwald, then launching it into space, rigged with explosives.  Stallone is totally insane now, and doesn't even care about the plants anymore, all he wants is revenge against both Knotts and Ringwald.   But in another awesome twist, it turns out that while Stallone and Knotts were fighting, Molly Ringwald moved all of the bombs back onto the space freighter.  So when Stallone hits the detonator, he blows himself up instead!

Molly Ringwald and Don Knotts than drift through space for years in the biodome.  Eventually, the biodome drifts into a psychedelic 2001: A Space odyssey style wormhole, and comes out on the other side of the universe.  Then a flying saucer full of gray aliens shows up, and transports the biodome on to the surface of a barren planet, which will now be able to be populated by all of the trees and animals from the biodome.  As the aliens fly away, Molly Ringwald reveals to Don Knotts that she is pregnant with his child.  During this conversation the camera starts to pull away, and we see the name of the biodome printed on the outside: ED-N.  Then we hear the couple call each other by their names for the first time in the movie.  Molly Ringwald's character is named Eve, and Don Knotts's character is named Adam.  And suddenly your jaw drops to the floor, because your mind has officially been blown!  Now, that, my friends, is how you make a sci-fi movie with intelligence and class.  Why the filmmakers didn't hop into a time machine and travel 40 years into the future to ask my advice on how to make this movie in the first place, we may never know.  But if any time travelers are reading this today... YOU KNOW WHAT YOU NEED TO DO.

Posted by Joshua Raymond at 9:58 PM

Email ThisBlogThis!Share to TwitterShare to FacebookShare to Pinterest
Labels: Horror in Space, Movies