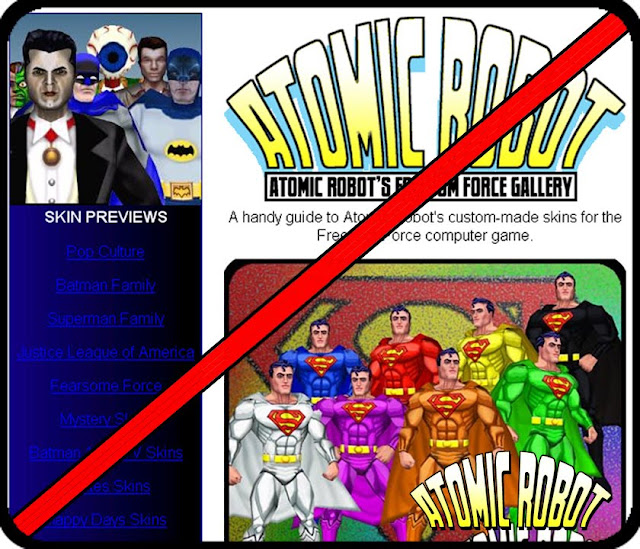 My old Freedom Force website, "Atomic Robot's Freedom Force Gallery," is no longer online. It was hosted by Geocities, which closed all their websites in October of 2009. I'm gonna start posting all of my skins in this blog instead. In the meantime, all of my old skins are still available in the following Yahoo Groups:


Bat-omic Robot Skins
The place to go to download and discuss the latest Caped Crusader related skins by Atomic Robot for use with the Freedom Force and Freedom Force Versus the Third Reich computer games. Home of the Polka-Dot Man skin.

More Fun With Atomic Robot
More fun skins for the Freedom Force computer game from your pal Atomic Robot. This second group of Atomic robot skins features original and pop culture skins, as well as a few odds and ends that don't fit in my other yahoo groups. Home of the Don Knotts and Mr. T skins.

Atomic Robot's Game-Skin-O-Rama
Only a maniac wouldn't want to play with these delicious comic book themed skins for use with the Freedom Force video game. Don't be a maniac! Join this group today!
Posted by Joshua Raymond at 12:19 PM