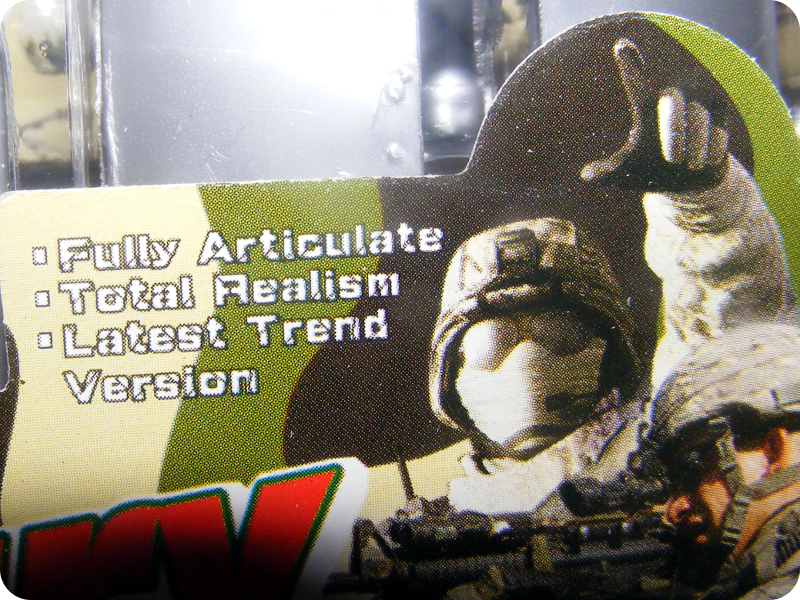 According to the package, these "Force of Action" Military Play Sets come with the following fascinating features:
I'm glad to hear that these action figures are "fully articulate."  I hate it when I can't understand what they are trying to say.  I'm a little concerned about the "Total Realism" though.  For a military figure wouldn't that include things like head wounds and what not?  That doesn't sound like it would be a fun toy.  As for "Latest Trend Version," I have to admit, I'm getting older, and I'm not really sure what the latest trend is anymore.  Is it "twerking?"  I really don't think I want to see these guys twerking.  I bet any teenagers who are reading this right now are rolling there eyes and saying "OMG!  Twerking is so 2013!"


Right off the bat, I've got to say, these might be the butt-fugliest action figures I have ever seen.  I mean just look at these guys.  First off, we have some sort of ski-mask ninja with two "Little Orphan Annie" black dots for eyes.  He looks like he is just peed his pants in a combination of confusion and fear.

Next, there is this character, wearing a pair of scuba goggles that are twice as big as his head. The goggles also sit so low on his head that the nose piece covers his mouth, and the top frame of the goggles covers where his eyes would be, so I'm guessing the guy can neither breath nor see.

To be fair, Mr. Goggles may be covering his mouth, nose and eyes on purpose, in order to avoid seeing or smelling this next character...

This guy has the whole left side of his face caved in!  I'm pretty sure that it was just some production error, like it was a cast from a damaged mold or something.  But it seems like the "artist" who painted this in some Chinese sweatshop tried to make the best of it, because he or she extended the flesh color of the paint to cover the whole caved in part of the head, and then tossed a few red spots on there as well, as if he was bleeding.  Plus, and this is the best part, look at his eyes.  Rather than paint him looking straight ahead, they painted him looking to his extreme left, as if he was desperately trying to see what is going on on the side of his head.  He also has a large chunk of jagged plastic flash sticking out of the back of his head.  Again, while this is almost certainly a production error, I can't help but think of it as an "exit wound."  Perhaps these were actually designed to teach children about THE HORRORS OF WAR.


The fact is though, I didn't really buy these packs for the action figures, I bought them for the accessories.  Each figure comes with 5 or 6 pieces, including guns, shields, and even a kayak, and they looked like they would be great to use with some of my real 3 3/4" inch action figures.  So I grabbed a handful of action figures I had nearby to test them out.  Testing out these accessories will be two of the Power Lords Power Soldiers by the Four Horsemen, as well as Zica Toys' Six Million Dollar Man and Bionic Bigfoot figures. 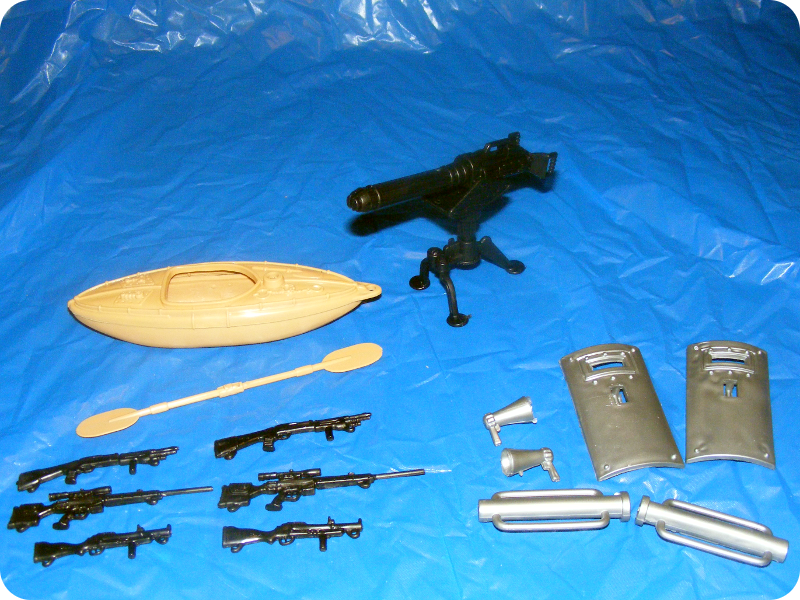 To begin with, it turns out that the Power Lords figures hand openings are too small to grip any of the accessories in these packs, which is a disappointment.  However, the handle from the riot shields was able to snap on to their wrists, so they could use those.  And actually, equipping a small army of Power Soldiers with those shields could look pretty cool.  I'm currently waiting for a package to come in the mail from the Four Horsemen with a bunch more of these soldiers, so I might end up doing that. 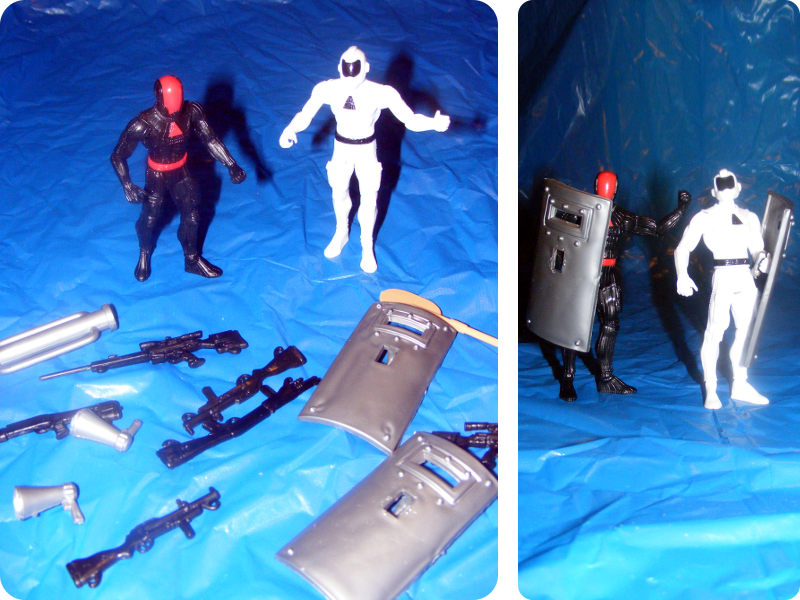 However, there were a couple of accessories that I thought were pretty great,  The first was the kayak and the oar.  Steve Austin looked great in it, and I could just imagine him kayaking around some jungle river somewhere, in search of the Bionic Bigfoot.  He could even hold the oar in both hands, which was pretty cool, seeing as how the official figure it came with could only hold it in one.  The kayak even has some nice sculpted details on it.  It's just a custom paint job away from being a high quality toy.  Plus seeing as how the whole package only costs a dollar,  you could just take the kayak and oar, throw away the rest, and it would still be a great value. 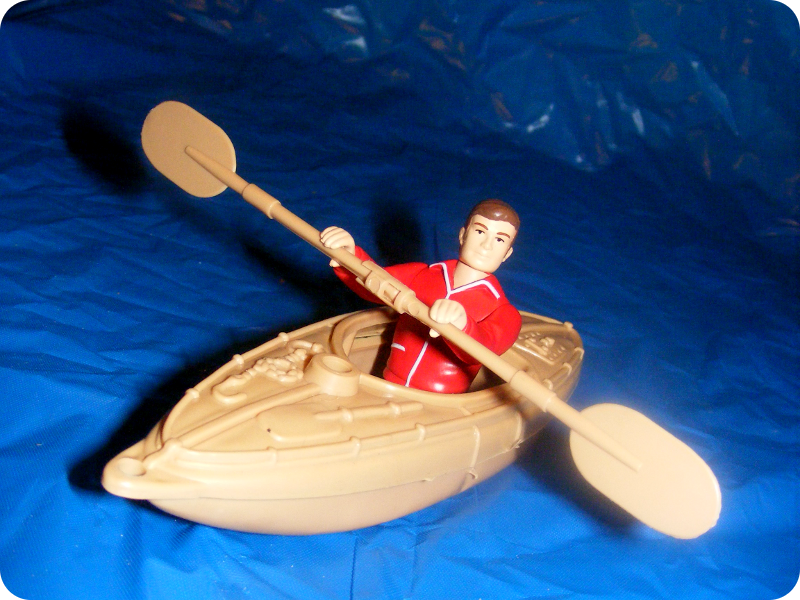 Finally, there is this nifty machine gun toy that comes on it's own tripod.  It can rotate up and down and side to side, and looks really cool.  Plus, I was stoked to find that Steve Austin's hands fit on the handles perfectly, like the toy was designed for him.

Even though half the items in the package turned out to be duds, at a dollar a piece, it didn't really matter.  I'll definitely be heading back to pick up some more of the machine guns, shields, and kayaks, as well as seeing if there are any other varieties that I missed.

Posted by Joshua Raymond at 2:33 AM