Growing up I was a huge fan of parody artwork like that found in Mad Magazine, and on the Topps Company's Wacky Packs trading cards.  In the fifth grade, all the kids in my class had cardboard dividers on our desks, which I guess were actually there to keep us from talking to each other, but we got to decorate them however we wanted.  I covered mine in hand drawn parodies of name brands like Pepsi and Coke, as well as satirical takes on the "positive thinking" educational posters that were in our classroom.  I also used to draw parodies of Cabbage Patch Kids based on the dolls my little sister owned.  When the Garbage Pail Kids came out, I was actually in the 7th or 8th grade, and feeling like I was too old to be interested in kids stuff any longer, but I couldn't help but collect the stickers, because they were right up my alley.  Some of the characters were so close to the drawings I had made, it was like the Topps Company was sneaking in to my room at night and rifling through my sketchbooks.  In particular, I had a dirty hippy Cabbage Patch Kid I used to draw, with flies buzzing around him, that was a dead ringer for "Blake Flake" aka "Hippie Skippy."


Recently, I got pretty excited to hear that Funko was coming out with a new series of vinyl figures based on the classic Garbage Pail Kids designs.  I was a little concerned when I heard they were going to be randomly assorted blind-boxed figures, because I thought I would have to buy multiple copies of the figures to complete the collection.  Yeah, the trading cards were the same way, but they were inexpensive, and you could trade them with other kids to complete your collection.  I was worried that I would have to spend hundreds of dollars if I wanted to collect all of these figures.  Luckily, it turns out that they pack exactly one of each figure in their retailer cases, so if you buy the whole case, you get the whole collection in one shot.  Plus, you get the retailer display as well, which is a bonus.  So now I have the whole collection, and I love them all.  Funko really nailed it with this line.

All of the figures share the same body, just with a different deco, and each has a unique sculpted head.  Many of them also come with accessories as well.  The figures come with three points of articulation, simple cut joints at the shoulders and the head.  There is no articulation on the legs, but they are so short and stubby that I don't think any articulation would have made sense for them anyway.  They are around 3 inches tall, although that varies a great deal depending on their head sculpt.  The sculpts on these things are phenomenal, probably the best looking sculpts I've seen from Funko.  The paint jobs are great, too.  I collect a lot of ReAction figures from Funko, and while I am a fan of those figures, these Garabage Pail Kids figures are on a whole other level.


The first three figures I opened up were Tee-Vee Stevie, Adam Bomb, and New Wave Dave, and right away, I knew this line was something special.  In fact, I think they are my three favorite figures from the line, and they're the ones I will be looking at today.


First up is Adam Bomb.  Adam Bomb is such a great design.  The combination of the radioactive mushroom cloud exploding out of his skull, juxtoposed with the ridiculous grin on his face as he presses the red button that sets off the explosion is the perfect embodiment of the Nuclear Doomsday anxiety that we went through at the height of the Cold War in the 1980s. Honestly, I think Adam Bomb's design, both on his original trading card, and in this new figure as well, transcends it's origins as satire or parody, and is legitimately a great work of art.  It's no wonder that it has become one of the flagship designs of the Garbage Pail Kids, and is the one that is featured prominently on the packaging for these toys 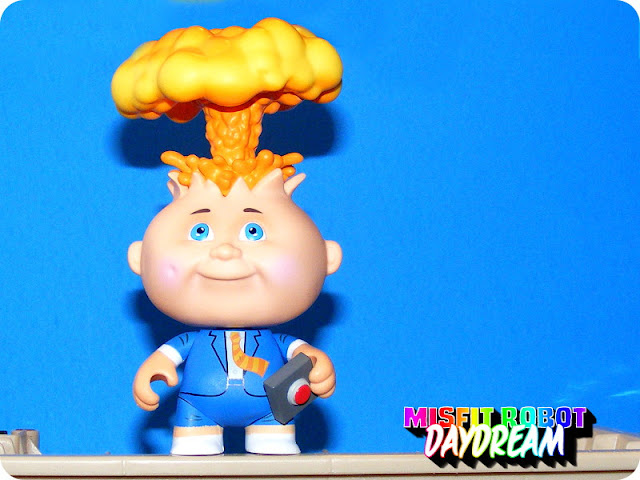 The actual figure comes in two pieces.  The mushroom cloud is a separate piece that snaps in to his head.  Plus he comes with an accessory, a red button to launch World War 3, which fits nicely in his hand.  Due to his limited articulation, he can't actually press the button, but it's still a nice extra to have. 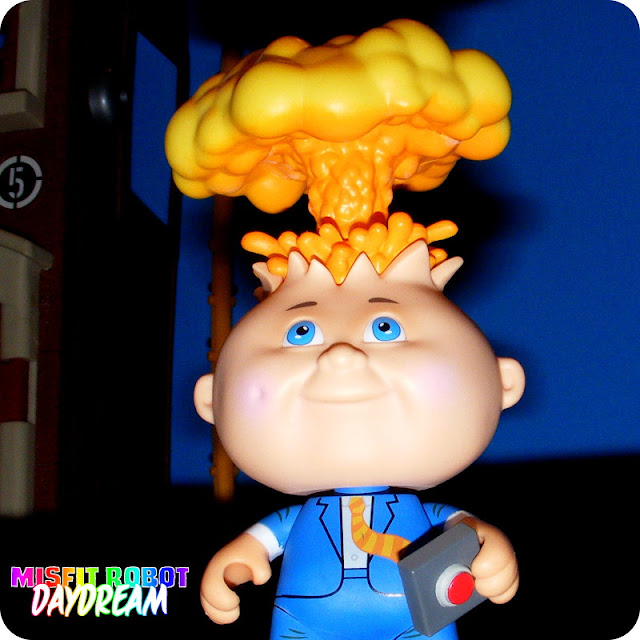 Adam Bomb is also available from Funko in an oversized 10 inch version.  I don't have it , but seeing as how I love the small version so much, I'll probably end up buying that one as well.


I watched a LOT of TV when I was a kid (and honestly, thanks to things like Netflix and DVRs, I still do), so Tee-Vee Stevie is a character who I can definitely relate to.  The guy has watched so much TV that his head has morphed into an old school analog TV with dials and wood grain (my old black and white TV I had when I was a kid looked just like that!).  Plus, his eyes have bulged out into two spinning hypnotic swirls, while his mouth just hangs open.  I know just how he feels.

Stevie comes with a remote control, although it seems more like the TV has control of him, not the other way around.  In my photo, you can see that there are some fingerprints on the back of my figure from some glue or paint, but they are really only visible in the flash photography, so they're not that big of a problem.  I didn't even notice they were there until I was editing the photos for this blog post. 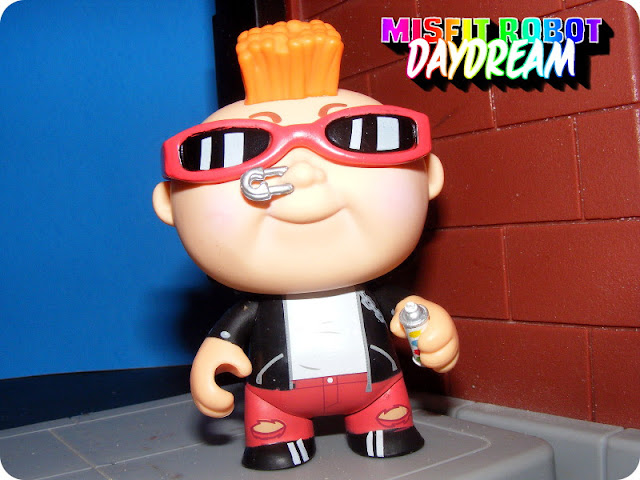 Poor Dave.  He's worked so hard to perfect his "Punk" look, with the mohawk, safety pin, and leather jacket... and then he get saddled with the nickname "New Wave."  It's no wonder he's taken to spray painting graffiti to alleviate his feelings of anti-social angst. 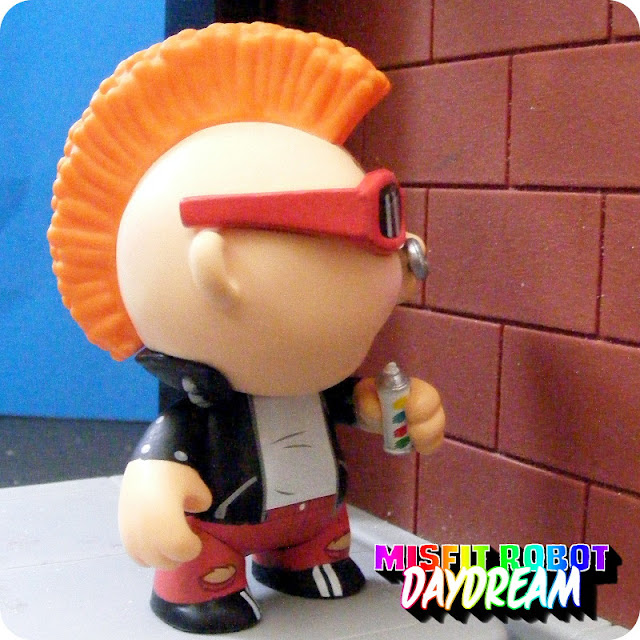 FUN FACT:  In the mid-to-late 1970's, the terms "Punk" and "New Wave" were often used interchangeably, and described artists from the same musical scene.  Bands like Talking Heads, Blondie, and The Ramones were all part of this scene.  It was the record labels that pushed for the term "New Wave," as they thought it would be more acceptable to mainstream audiences.  They also tended to favor the more pop and synthesizer oriented bands over the brasher guitar-oriented bands, eventually leading to these being scene as two different genres. 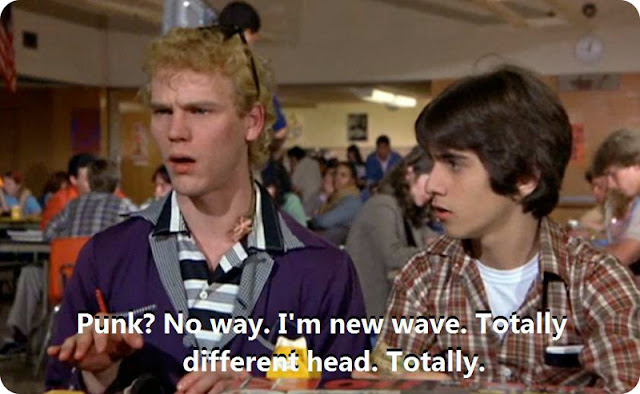 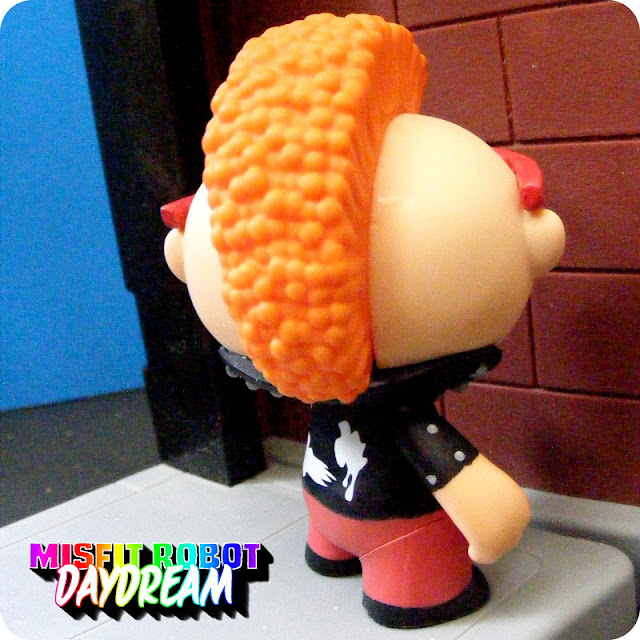 Posted by Joshua Raymond at 2:37 PM