Hi!  Thanks for joining me for part two of my look at Bif Bang Pow's 3 3/4" plastic action figures.  Last week I reviewed Hank and Dean Venture.  Today, I'll be checking out Brock Samson and Dr. Mrs. The Monarch.

Brock is the tallest of the figures released so far, standing at 5 inches.   His sculpt is decent,  and he's easily recognizable.  I think his facial features are sculpted a bit too soft and doughy looking, although it's not so bad that out ruins the figure.  The paint on his two-way Dick Tracy wrist radio is a little sloppy looking, but not too bad for a figure this size.  Aside from that, there are no other obvious issues with his paint job.  Brock came in two versions: a standard version in a black t-shirt, and a blood splattered 2012 San Diego Comic-Con version in a white t-shirt.  The two figures are identical except for the paint jobs.

Dr. Mrs. The Monarch is the smallest figure at just under 3 1/2 inches.  Her height is about right compared to the other characters, as she is short on the show, but her proportions seem off.  Her arms are very long, hanging down nearly to her knees.  Her head is also a little small, compared to how she looks on the show.    Her facial sculpt, while not soft and doughy like the Brock Samson figure, doesn't really capture her appearance from the show. She is still obviously recognizable as Dr. Mrs. The Monarch, but this is mostly due to her costume and hairstyle.  Her "wings" are made from a translucent flexible rubbery material.

Brock has a knife that fits well in his hand and holsters in his belt when not in use.  It looks especially cool with the blood-splattered version, as it looks like he's been slaughtering bad guys.  Dr. Mrs. The Monarch does not have any accessories. 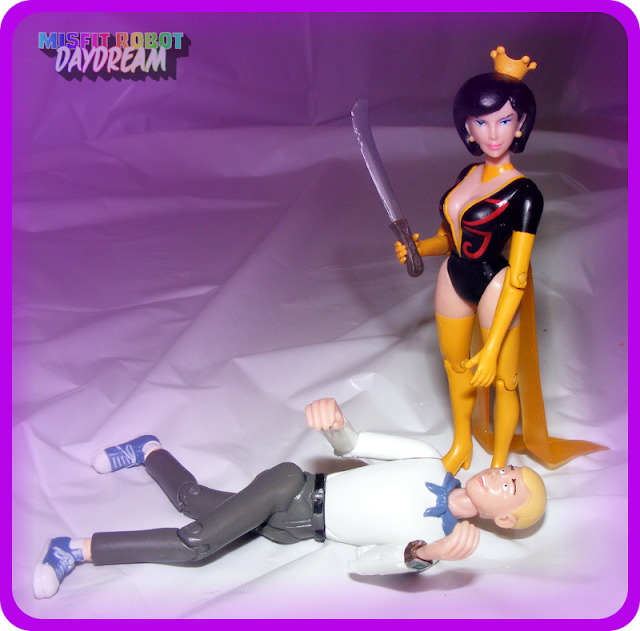 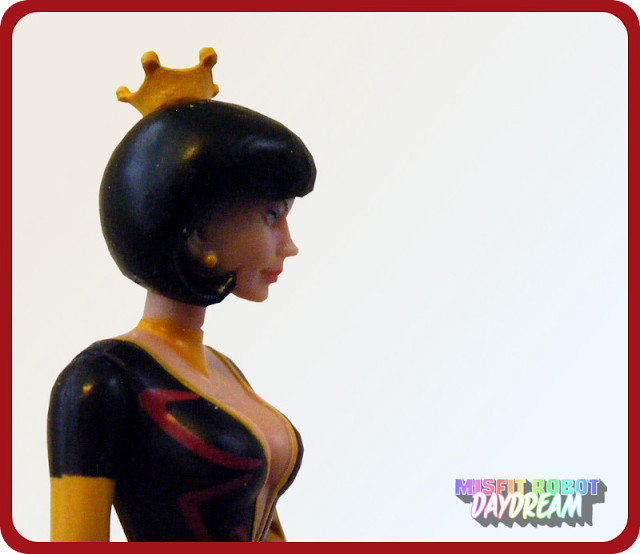 Hank, Dean, Brock, and Dr. Mrs. The Monarch are all the toys released in this line so far.  The next wave is currently scheduled to arrive in June, with the Monarch, Phantom Limb, and Dr. Rusty Venture.

Posted by Joshua Raymond at 6:23 PM