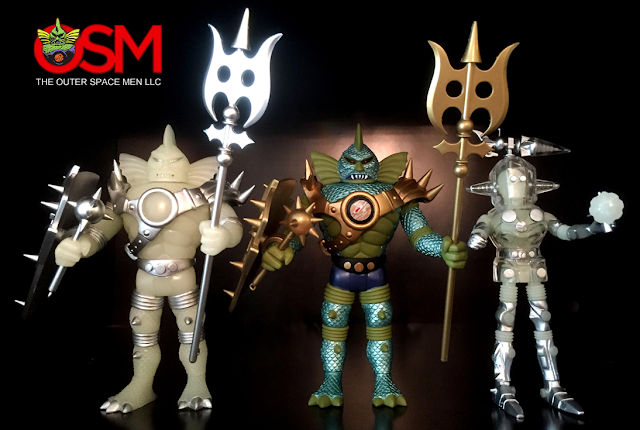 The Outer Sapce Men began as an action figure line in 1968, which was a bit before my time, but I fell in love with them when the Four Horsemen brought them back in 2010.  Their version of the Outer Space Men quickly became my favorite modern day retro toy line.  That action figure line sadly ended a few years ago, but now it is coming back, courtesy of OSM creator Mel Birnkrant, Gary Schaeffer, and The Outer Space Men LLC.  One of my all time favorite toy lines is returning!  Woo-hoo!  Read the press release below:

NEW YORK CITY, NY, August 16, 2016—Gary Schaeffer has announced via social media and through the official OSM site (www.theouterspacemen.com) that, as of next week, the Outer Space Men line of action figures continues!

A brand new Colossus Rex in the vintage and rare 1968 blue variation with golden accessories will be released through the OSM website store. The details of which night and at what time has yet to
be announced; however, Schaeffer has said it is to be sometime next week and he will be personally alerting the fan base via social media and the OSM website.

With the long awaited announcement that the iconic and infamous Outer Space Men line of toys will be continuing, Schaeffer has gone on record saying “More OSM figures will now be issued, faster than ever before”.

With less than 18 months to go before celebrations begin for the 50th anniversary of the toy line, Schaeffer is guaranteeing that building up to that momentous occasion will introduce something so incredible and unique that the world will never be the same.

Schaeffer closed with the remark, "be prepared to see something so special and incredible that even Hollywood will finally admit that the OSM is a galactic force to be reckoned with!".

Posted by Joshua Raymond at 9:24 AM