"The Rock 'N' Roll Superman!" Two of my favorite things in the world are comic books and rock and roll, so imagine my excitement when I stumbled upon this little gem from an old issue of Superman's Pal Jimmy Olsen. Our story begins as Jimmy Olsen goes to visit his rock star cousin, Jerry, aka the one and only Rock'N R'Olsen. Gosh, I wonder what kind of shenanigans will ensue?
(click on the pictures to enlarge them)

Jimmy wants to help.  Bad idea.  Jimmy Olsen's idea of helping usually involves drinking a potion and turning into a werewolf or a giant turtle monster.

Oh, the manager just happens to have a wig and a fake mustache laying around.  That makes sense. 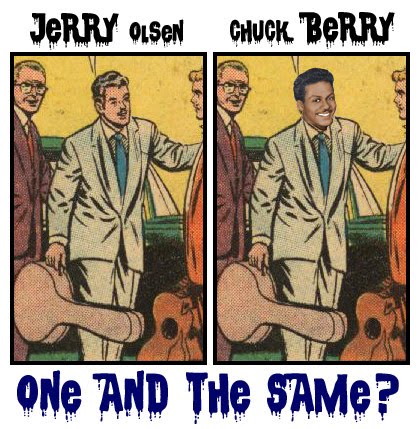 Meanwhile, Superman is dancing with rich society women for "charity." Sounds suspiciously like super-prostitution to me.  Suddenly, he starts to "rock-and-roll!"  Great Balls O' Fire! 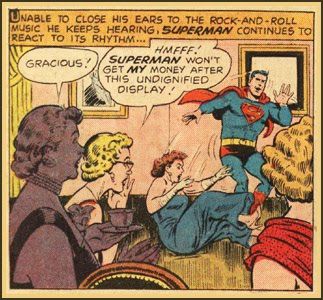 Apparently, Superman's idea of "rock-and-roll" dancing involves throwing women on the floor.  Smooth.  Oh and the blonde chick with the glasses now says, "Superman won't get my money,"... yep it's super-prostitution all right.
The next day, Superman is dancing at a private all-girls school for charity when...  okay, hold on a second.  Shouldn't Superman be out fighting crime or something?  I mean, I guess if I had super powers I'd use them to pick up chicks, too, but come on, this is just silly!  I mean, how much money can Superman make dancing, anyway? 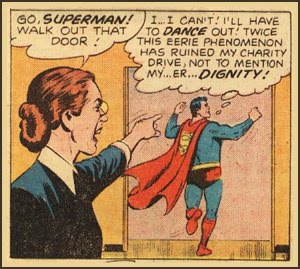 Oh, I think you lost your dignity when you chose to be a super-prostitute, Supes, but that's just me... 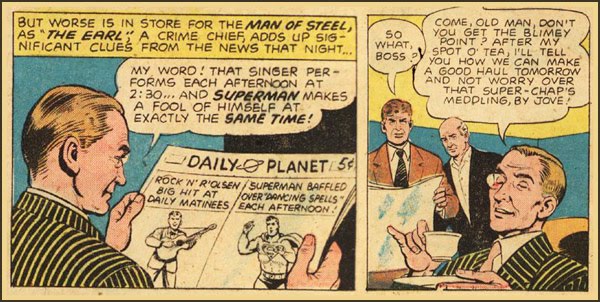 Ah, and now we're introduced to the villain of the piece, "The Earl."  "Pip pip, tallyho, and pardon me while I eat a wee bit of bangers 'n mash, guv'nor!"  You can tell he's evil because he wears a monocle. 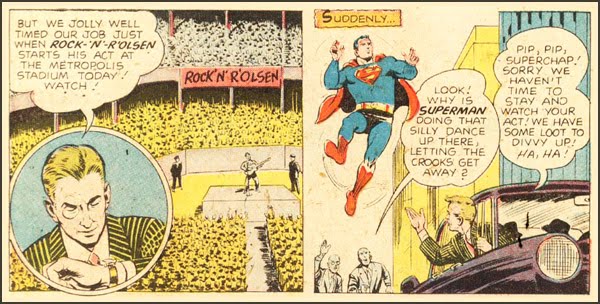 I think Superman wants the Earl to stuff his super-shorts with dollar bills. 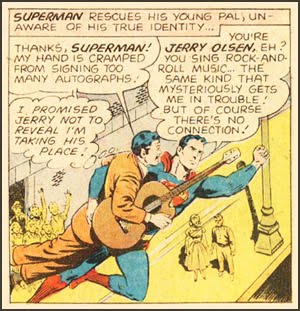 Come on, Jimmy, I think we all know why your "hand is cramped."
Let's see... Superman starts dancing every time Jerry Olsen sings "rock-and-roll" music.  Jerry Olsen, who looks exactly the same as  Superman's pal Jimmy Olsen, except with a mustache.  He's right, how could there possibly be a connection? 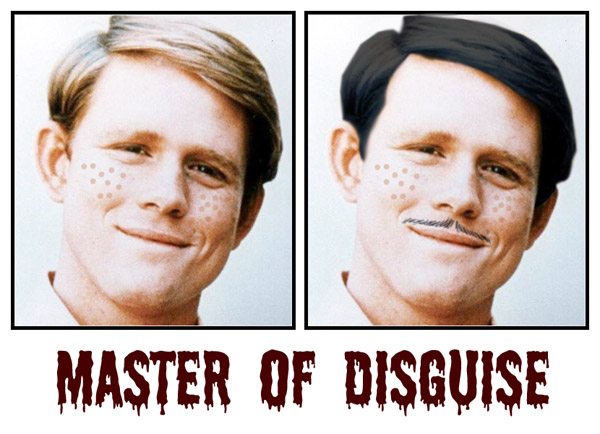 Then again, this is a world where no one can recognize Clark Kent as Superman because he wears a pair of glasses, so I guess we should give him a pass.

The next day, Superman doesn't have a rock-and-roll attack, and is finally able to stop the Earl.  Since he now has full command of his powers, what does he use to stop them?  Super-speed? Heat vision?  Freeze breath?  Nope.  He throws rocks at them.  Dude, I could have done that. 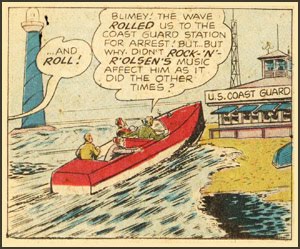 Okay, so Jimmy's Superman signal watch was sending signals from the tape player to Superman's brain, which was forcing him to do the twist?  It's scientific! 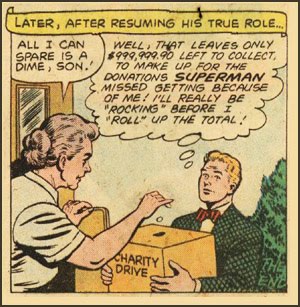 Wait, so Superman was going to earn a million dollars "dancing" for charity?  Jimmy's going to have to step up his game if he's going to earn that kind of money.  Maybe swap out the bowtie for a g-string...  on second thought, keep the bowtie.  Chicks dig a guy with a touch of class.