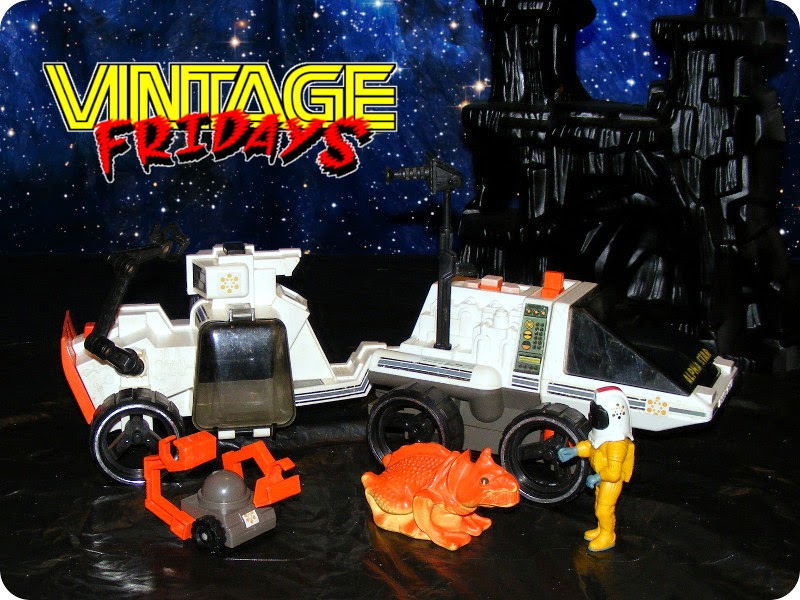 The "Alpha Star" is one of my favorite toys from the Fisher-Price Adventure People.   It was first released in 1983, and came with a motorized planetary rover and detachable trailer, both with a bunch of fun interactive features.  It also included an astronaut, a robot, and an alien creature.  It had everything a kid would need to have some awesome planet exploring adventures.  Let's check out all of it's fun features after the break!

The fun begins with the rover itself.  It has a motor that takes two D batteries, and has three buttons on top for forward, stop, and reverse, as well as a lever to turn the tires forward, left, or right.  The motor still works on mine, but only if you hold the buttons down, so I can't just let it drive around on it's own.  There is also a switch on the bottom of the rover to disengage the motor, and then you can use it as a regular push toy.  The rover has big bulky tires that look perfect for traveling over rocky alien terrain.


The cockpit has a smoke colored transparent canopy that flips forward to seat two action figures.  It comes with one figure, an astronaut in a yellow spacesuit with a big white helmet.  You can put another Adventure People figure (or other 3 3/4 inch figure) in the other seat.  My other Adventure People astronauts don't actually fit in the seats, though, because one of them has a bulky backpack, and the other has big boots. Clawtron fits in just fine, as well as some other figures both vintage and retro.  My vintage Kenner Chewbacca fits inside it, even though he is a big figure, but my vintage C-3P0 doesn't, because his arms are slightly to wide apart.  My Funko ReAction Frankenstein figure fits inside it, but the ReAction Wolf Man won't, because his feet are slightly too big.


The cockpit also detaches from the rover, so you can play with it as a small space cruiser.

There is a "radar/camera communications antenna" that attaches to the rover, and rotates as the wheels move.  It has a small platform and a handhold, so an Adventure People figure can stand on it.


The antenna can be removed from the rover and attached to the trailer instead, and will rotate as the trailer is towed.


The trailer has a storage space in the middle, with smoke colored transparent doors on each side.  The alien creature can fit inside the storage area.


The trailer has an articulated gripping arm on the side that can be used to collect samples from the alien planet.


At the rear of the trailer is a hatch.  Press the button, and the hatch flips down, and the wheeled robot rolls out.

The robot has a round, R2-D2 style head on a small wheeled body, with two big arms that can move up and down.  The robot has one sticker on it, but beyond that is just molded in solid plastic without much in the way of sculpted details.


The alien creature has no articulation. It's basically made like a rubber ducky or a dog's squeaky toy.   Mine is molded in light orange rubber, with dark orange paint airbrushed on top, and green painted eyes.  I've seen some that are just solid orange, as well.


This is a great toy.  I love the retro, "Space: 1999" style design, that looks both realistic and fantastic at the same time. It has so many fun features for a kid to play with, and it also looks great as part of an alien planet display.  It makes a great addition to any collection of 1970s and '80s sci-fi toys.