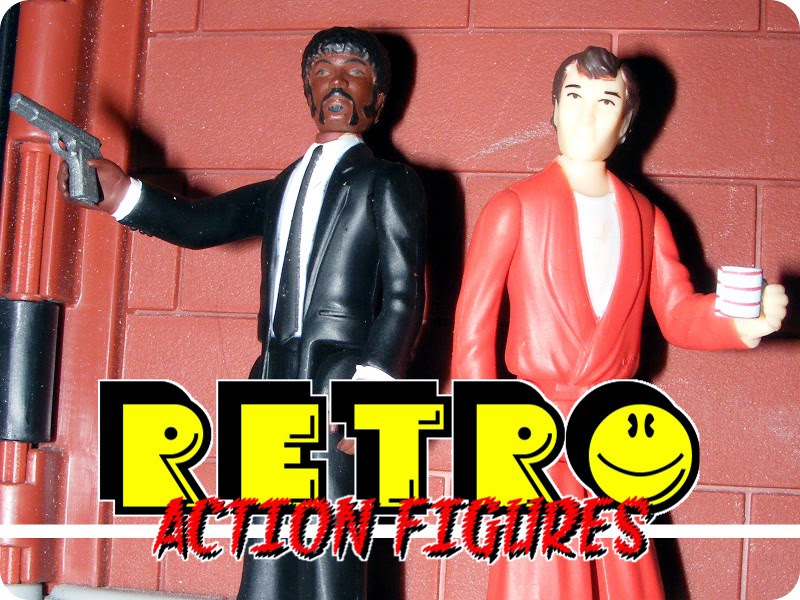 Yes!  The Pulp Fiction ReAction figures are finally here!  These have been some of the ReAction figures that I have been anticipating the most, and I finally have the first four figures in my hands.  Today I'm going to be looking at two of them:  Samuel L. Jackson's Jules Winnfield, and Quentin Tarantino's Jimmy Dimmick.  Let's check them out after the break!


The figures come in cards with artwork straight off of the iconic movie poster, and they look great.  The movie poster art translates perfectly to an action figure card.  The back of the card is not as special, just some pics of the other figures in the line.


In addition to the standard version of Jules, which I opened up, there is limited edition "blood spattered" variant version of Jules, with blood splattered on the plastic bubble and on the figure itself.  I have that one as well, but I decided I'm going to keep that one on the card.

The figures have the standard 5 points of articulation that most ReAction figures have.  Jules comes with a gun, and Jimmy comes with a coffee cup.  The coffee cup is great, it really helps to sell Jimmy as an individual character.  The Jimmy figure kind of looks like Quentin Tarantino, not a perfect likeness by any means, but close enough for a retro styled figure like this.  Jules doesn't really look like Sam Jackson, but with his signature black suit and unique hairstyle, the figure is not going to be confused for any other character.  Jimmy's legs are spread out a bit to far, which separates his bathrobe too much, although it's not as big of a problem as it was with Funko's similar Bride of Frankenstein figure.


Overall I think these guys are really special, they are like no other characters in my action figure collection.  next week I'll be opening up the other two figures that have been released so far:  Vincent Vega and Mia Wallace.  With their limited articulation, they probably won't be dancing the Batusi, but they should still be a lot of fun.


Kool and the Gang - Jungle Boogie