Nearly perfect, except for one major flaw. 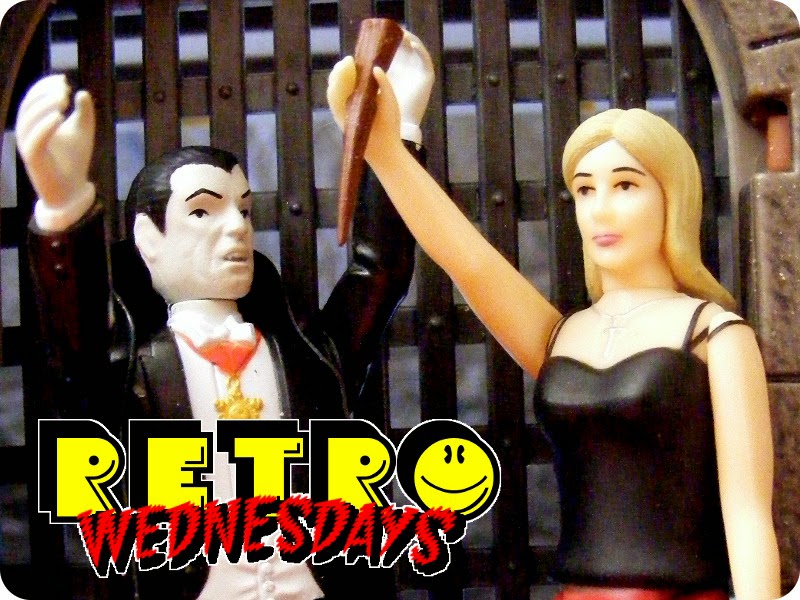 The last Funko ReAction figure I opened up was Mia Wallace from Pulp Fiction, and I was severely disappointed with that one.  It had some terrible paint flaws, and a freakishly misshapen face.  So I was worried about what the next figure I got, Buffy the Vampire Slayer, was going to look like.  Luckily, the paint job and sculpt are really good on this one.  Unfortunately, there was a different serious flaw with this figure, so this one ended up being a disappointment, too.  Read about it after the break. 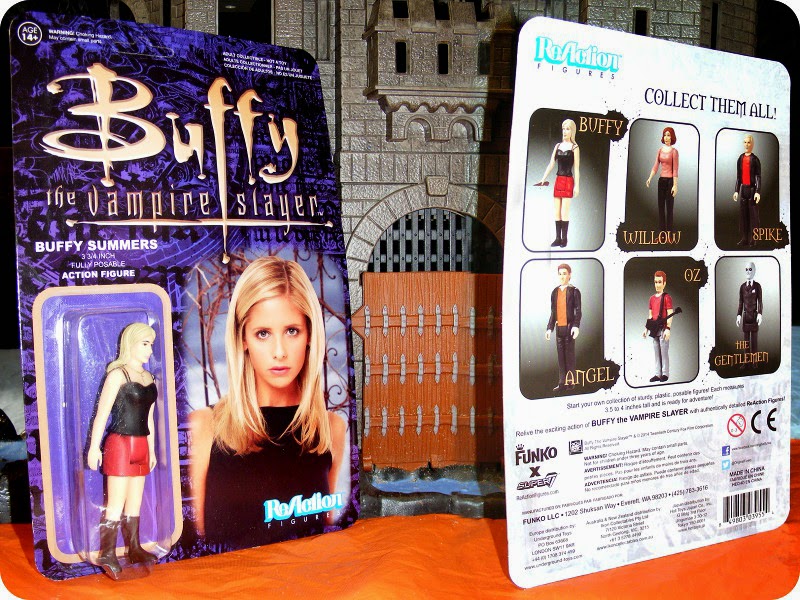 First of all, the card art is really good, at least from the front.  The back of the card is kind of plain, but the front looks great.  It's got a gothic purple and black background, with the Buffy the Vampire Slayer logo printed in gold ink.  The contrast in the colors is really striking, and it perfectly fits the tone of the TV series. 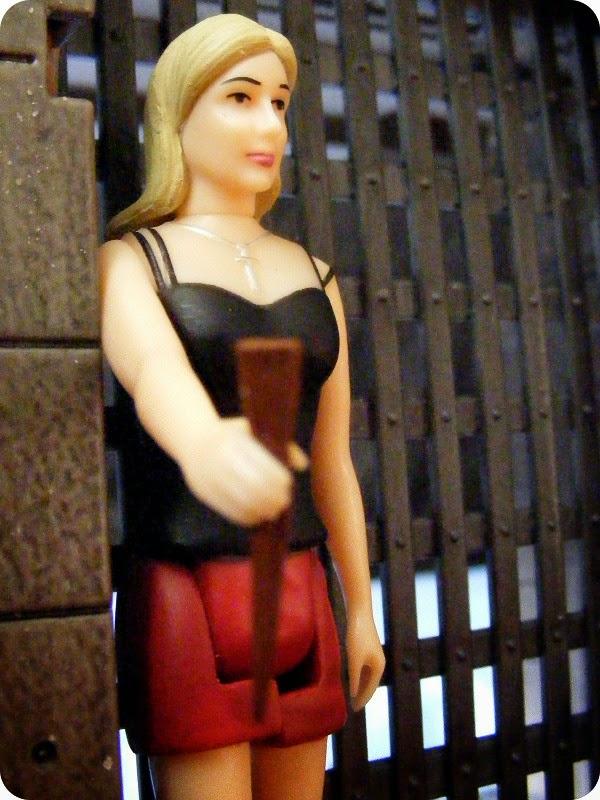 The action figure looks great too,  The sculpt is really nice looking.  The face doesn't really look like Sarah Michelle Gellar, but that's part of the aesthetic for this style of figure, so that's okay.  It's a nice looking face sculpt, that still fits the character if not the actual actress.  The eyes and lips are not painted on off-center or weird looking like they are on some of the other ReAction figures, and her hair is all painted blonde, without any unpainted flesh colored sections like we've seen on a lot of the other long haired ReAction figures. 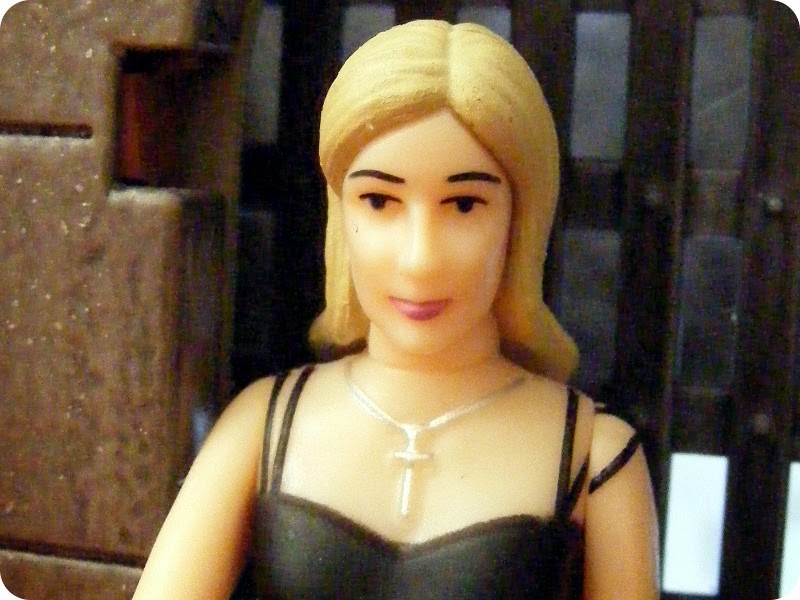 The paint job on the rest of her body is pretty good, too, even on the fine details like her necklace and the straps on her top.  The only paint flaws are under her skirt where the legs meet the skirt, but that is only noticeable if you pick the figure up and look at it upside down, and even then it's not that bad. 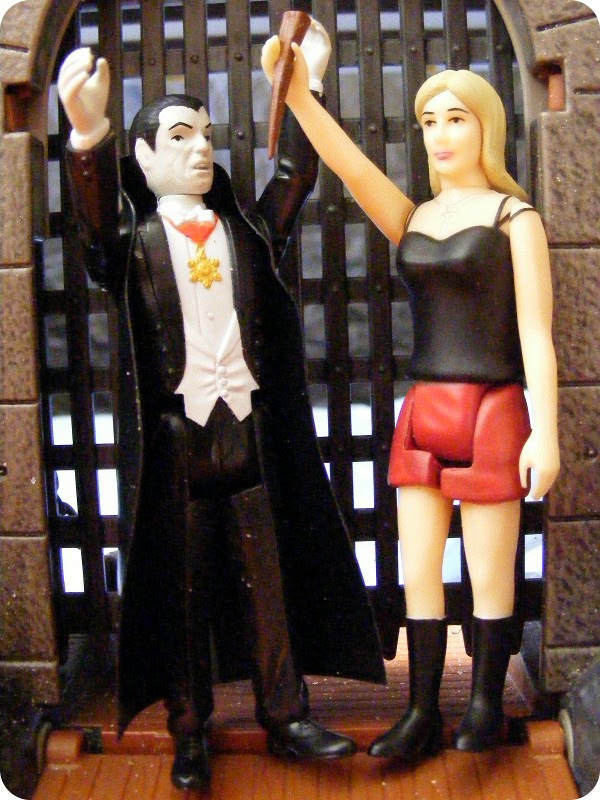 She comes with one accessory, her vampire impaling wooden stake, aka "Mr. Pointy."  It's the perfect accessory for this figure.  It fits in her hand a little loosely.  It's fine for posing her, but if you move the figure around, it will probably fall out. 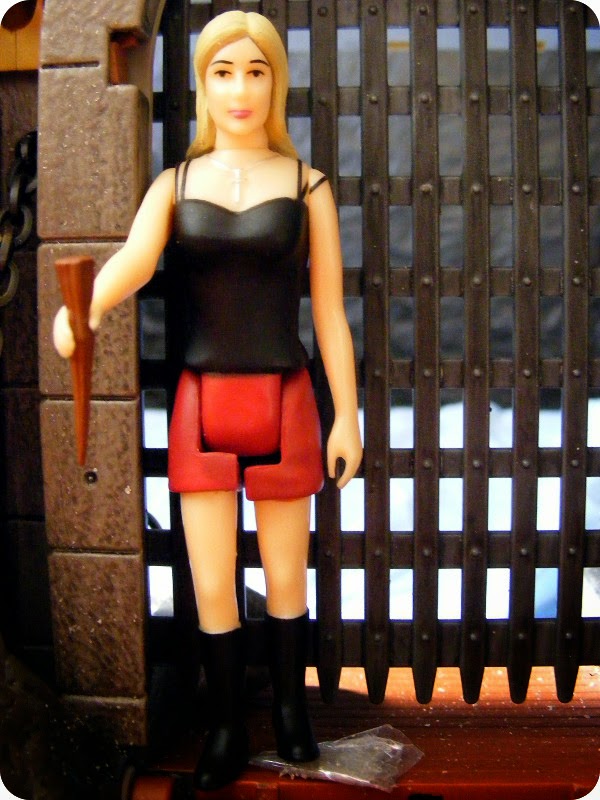 
So, this was almost a really great figure, but as I mentioned earlier, it has one serious flaw.  One of her legs is shorter than the other.  It's absolutely impossible to make this figure stand up on her own.  For all of my photos, I had to hold her up with my hand, or lean her against a wall.  I haven't seen any reviews of this figure online yet, so I don't know if I got a bad figure, or if they are all like that.  I would advise you to inspect this figure very carefully at the store before you buy one, just in case they are all bad.  This is a real bummer, too, because aside from the short leg, this is a really nice looking figure, and would have been one of my favorites.

UPDATE: Since I wrote this review, I've  bought a second Buffy figure, and it had the same problem with one leg shorter than the other.  I've also heard from other toy collectors, who had the same problem with their Buffy figures.  So it's looks this problem is actually with every figure, or at least very widespread.  So be warned before you pick this figure up.
Posted by Joshua Raymond at 12:33 PM