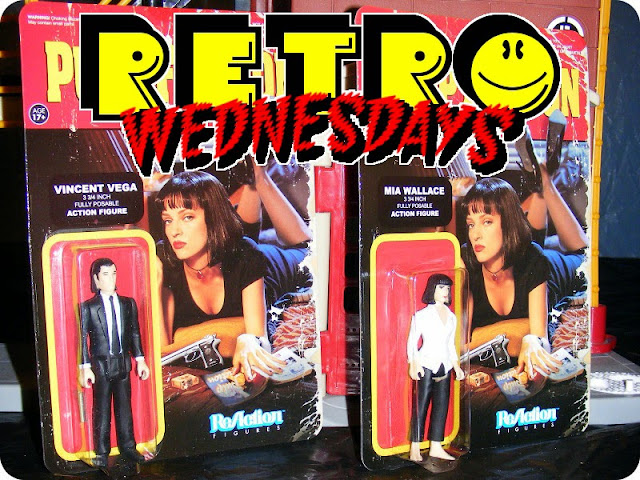 Last week I took a look at Jules Winnfield and Jimmy Dimmick from Funko's Pulp Fiction ReAction figures.  This week I'm checking out the remaining two figures that have been released so far:  Vincent Vega and Mia Wallace.  There are still four more figures due to be released from this line, and hopefully those will be in stores later this month, at which time I'll be looking at those, too.  I was pretty happy with Jules and Jimmy, and I'm happy with the Vincent Vega figure, too.  Unfortunately, the Mia Wallace figure is a mess.  Check them both out after the jump! 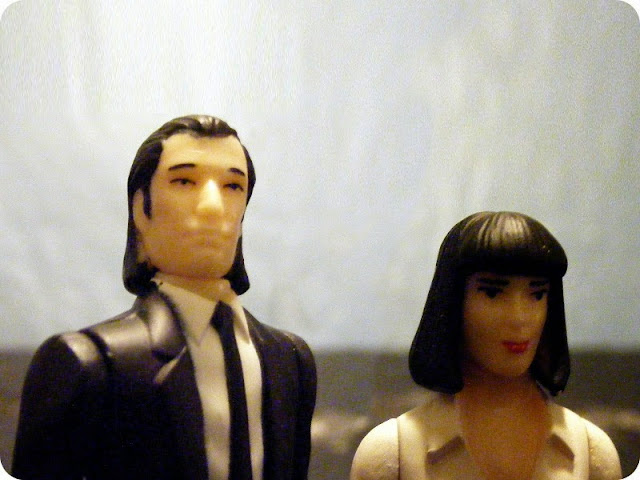 Okay, let's get tot he bad new first.  The Mia Wallace figure is kind of awful.  She does have nicely sculpted hair and clothes, I'll give her that.  But her face sculpt and paint job are terrible.  I understand that these figures can't always look like the actors who played them in the movies, but the sculpt on this figure doesn't just not look Uma Thurman, it barely looks human.  Her nose is super thin, and her face isn't proportioned like a normal person. You ever see any of those freaky pictures of Michael Jackson after he had all of his plastic surgery, and almost looked like an alien?  It looks kind of like that.   My best guess is that something went seriously wrong during the production of these figures, maybe the mold broke at the factory or something?  Because I can't imagine they intentionally sculpted her to look like that. 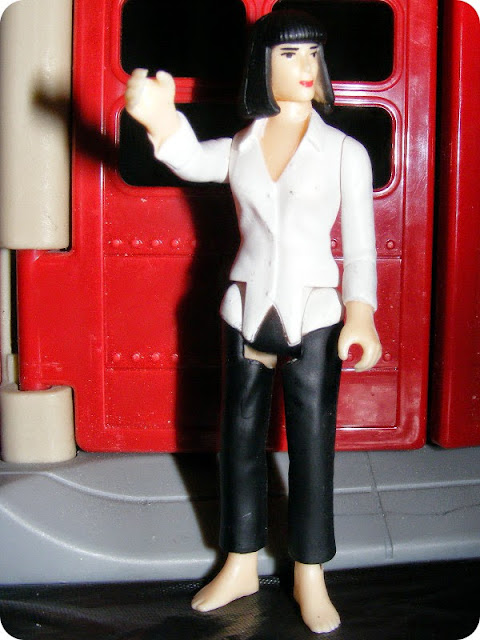 Topping off that terrible sculpt is an equally bad paint job.  Her lips are a bizarre red crescent, that doesn't even line up with the lips on the sculpt.  They look like something a little kid drew in crayon.  Her eyes are asymmetrical and have a bit of an Alfred E. Neuman look to them.  Finishing off the bad paint on her head, her hair is not fully painted black, and is still flesh colored on the inside of her bob, close to her face.  Also, her legs were cast in flesh color, and the pants were then painted black, but they didn't paint the interior part of the legs where they connect to her hips, even though they are clearly visible.  So she has two flesh colored slashes at the top of her legs, as if her pants were ripping apart at the crotch.  The legs are mostly black anyway, why didn't they just cast them in black, and then just paint flesh color on her feet?  That would have solved that problem, and used less paint, to boot.  The Vincent and Jules figures both are cast in black plastic, so I know it was available to them.  Overall, this is just a shoddy figure.  It looks like a cheap bootleg figure you'd buy at a dollar store or a flea market, not a legitimate figure from a real company. 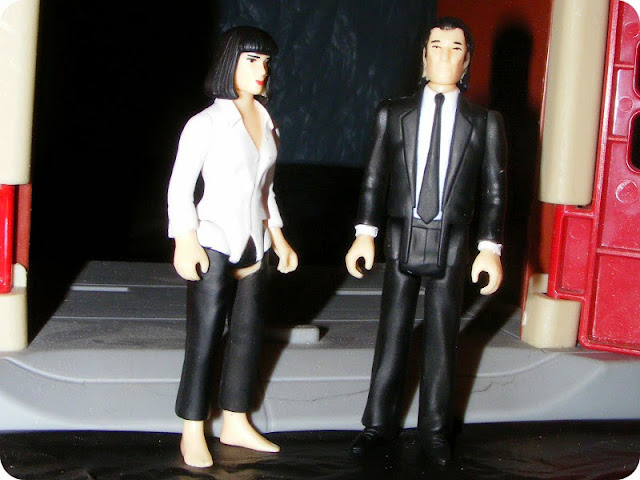 Thankfully, the Vincent Vega figure fares better.  He does have the same issue with his hair that the Mia figure does, though, as the black paint doesn't extend far enough, leaving some of his hair flesh colored.  The very first ReAction figure I reviewed, Snake Plissken, also had this problem.  I hope this is not going to continue to be an issue on every action figure they make, male or female, that has long hair.  Aside from the paint on his hair, the figure looks pretty good.  While it doesn't capture the likeness of John Travolta, it has enough of it to get the point across. 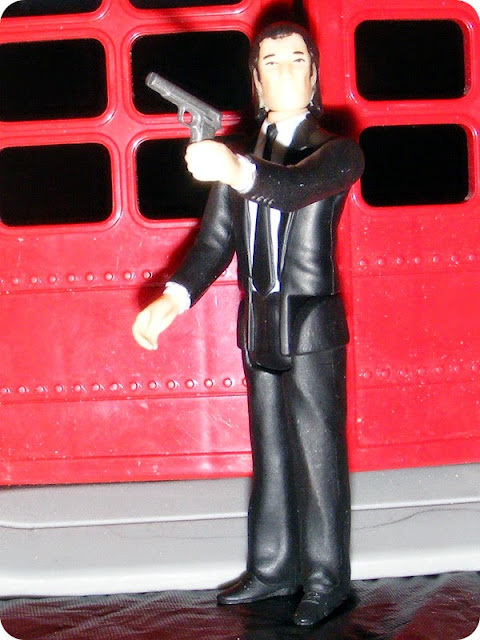 So, of the first four Pulp Fiction figures, 3 of them were pretty good, and one of them sucks.  It's a real shame about the Mia figure though, as it really dampens my enthusiasm for the rest of the line.  It's a bummer, because Pulp Fiction is one of my all time favorite movies, and I've been looking forward to these figures ever since they first announced them last year.  As it is, Jules and Vince will probably make it into my regular action figure collection, and the rest will probably just end up in storage or something.  Oh well.

UPDATE 01/19/15:  Apparently, not all of the Mia Wallace figures came out as fugly as the one I got.  Check out this review at Kastor's Korner for a much better looking Mia figure. 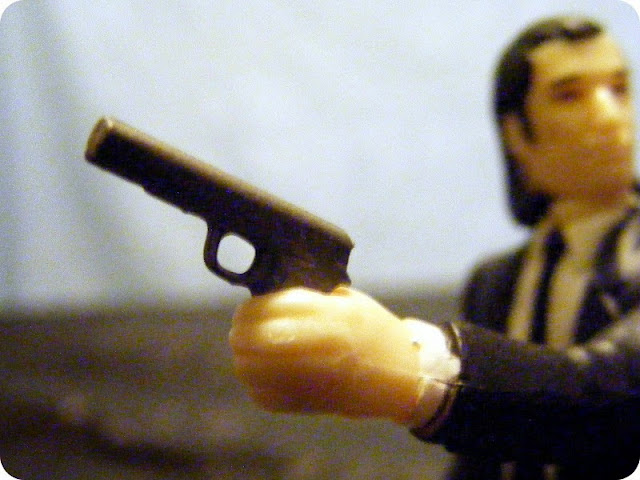 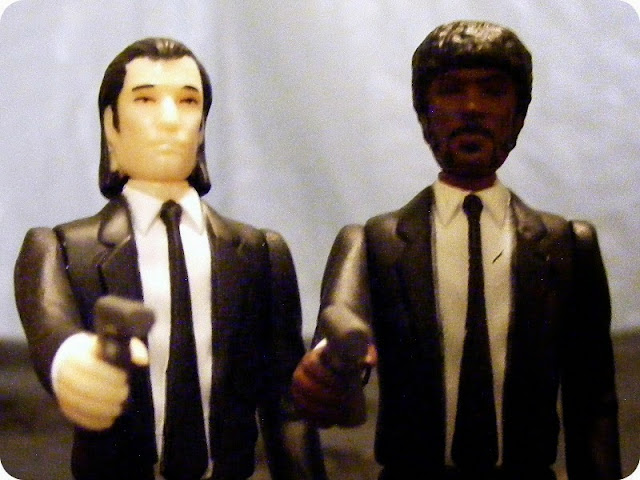 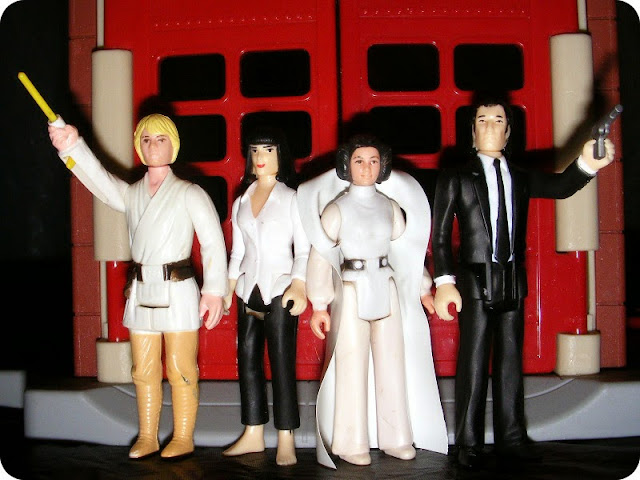