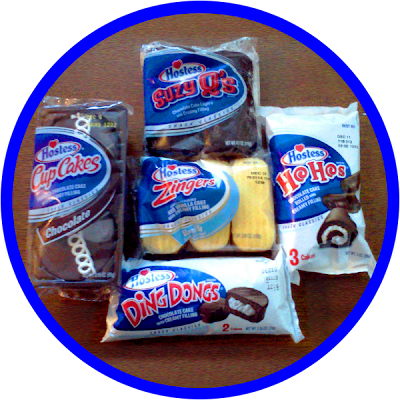 
Happy Thanksgiving, everybody!  Of course, it's a little hard to be thankful when we are reeling from the death of our beloved Twinkie the Kid.  I was at work when I got the news that Hostess was shutting down.  When I got off work, I trekked around town looking for one last Twinkie, but everyone was already sold out.  But I did pick up a few other Hostess products, and now I'm staging a Hostess Taste-Off.  Joining me with additional commentary is my old friend, Naked Mego Batman.  Here is what we discovered. 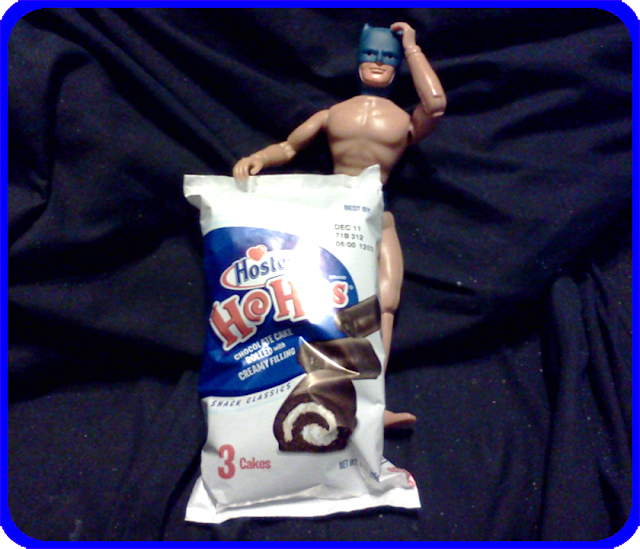 What it is:
A thin chocolate cake with a layer of frothy sugar foam on top of it, rolled into a pinwheel shape, and then coated in chocolate.

How it is:
Not that great.  It's overly sweet, and the chocolate tastes fake.

Mascot:
Happy Ho Ho.  I guess he is a happy prostitute?

Naked Mego Batman Says:
The dark chocolate devil's food cake appeals to evildoers, and thus is a great tool for fighting crime.  Just throw these at the feet of criminals, and they will drop their weapons to grab these up instead.  Then it's punching time.


Ding Dongs (also known as "King Dons" in Canada, and formerly known as "Big Wheels" on the East Coast of the USA) 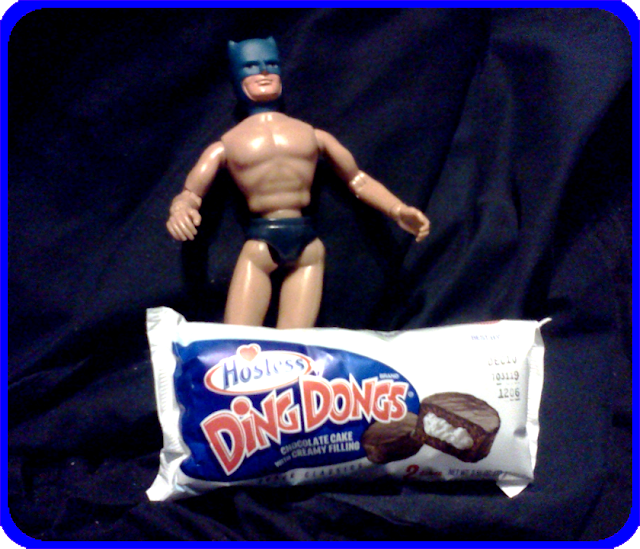 What it is:
A small round chocolate cake, filled with some sort of whipped sugar substance, and coated with chocolate.

How it is:
Too sweet.  They taste too much like sugar, not enough like chocolate.  The chocolate coating on the outside helps add to the chocolateness of it, but it still falls a little bit short.  Not bad, really, but not all that good either

What it is:
A crusty pie stuffed with bright red pie filling.

How it is:
This one I had a few weeks ago, so I didn't get a picture.  I had been buying generic fruit pies at the 99 Cents Store, and they were pretty good, so one day I decided that if the generic ones were good, the real Hostess ones would be even better.  That was a mistake.  The generic ones' fruit filling actually tastes like fruit.  The Hostess ones taste like corn syrup and food coloring.  I only ate half of it before I got grossed out and had to stop. 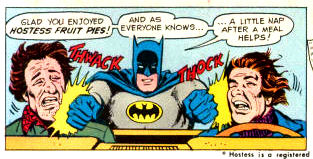 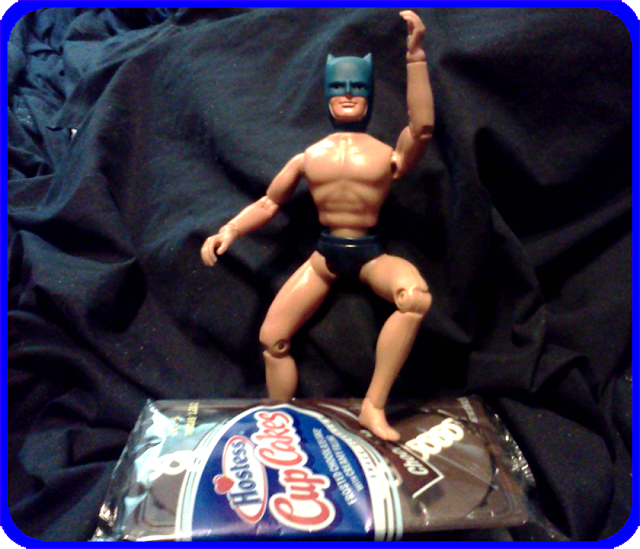 What it is:
A chocolate cupcake with some white filling inside, chocolate frosting on top, and a white squiggle of sugar paste or something on top of that.

How it is:
This one was pretty decent.  Like all the hostess stuff, it's a little too sweet, but it wasn't as bad as the other Hostess products I tasted.  This is the only chocolate Hostess product I ate that actually tasted like chocolate.

Naked Mego Batman Says:
I've defeated many villains with these cakes.  Great villains like Crime Director (the evil film director) and Pigeon Woman (she mind controls pigeons.)  Mind controlling pigeons is a weird power.  It makes Aquaman look impressive, by comparison.  He can mind control fish.  Sometimes I like to imaging I am a fish...  or maybe a happy little bumblebee...  ampersand...   squaormm...   uhh... oh, excuse me folks, I'm not used to eating all this sugar at once, I think it's having an effect on me. 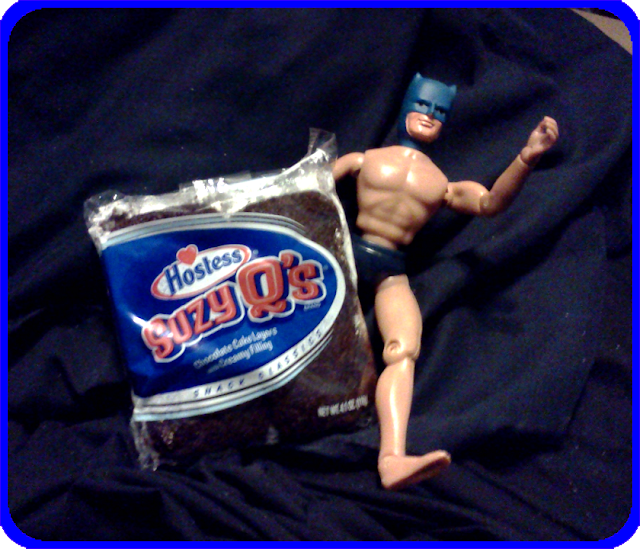 What it is:
Sort of a "sandwich," with two rectangular pieces of chocolate cake, and some sort of frothy whipped sugar stuff glooped in between.  According to Wikipedia, there is also supposed a version of these with banana flavored cake, but in all my life, I've never seen one.

How it is:
The filling was super messy, and got all over my fingers as I ate it, I had to wash my hands when I was done.  The taste is really, really sweet.  I had to drink a glass of milk after I ate it to stop myself from feeling sick.  The chocolate flavor of the cake is completely overpowered by the filling.  Might as well be eating a bag full of sugar.

Mascot:
Some kind of rectangular head.

Naked Mego Batman Says:
A layer of creamed filling trapped between two layers of chocolate cake. Yet the filling oozes out everywhere, like when the police try to jail Clayface between ordinary prison bars.  He escapes every time, but they keep locking him up anyway!  Why Commissioner Gordon, why?  It's not just Clayface either... all of them keep escaping!  What's the point of even capturing them?  Maybe it's time to hang up my cowl, and become a traveling microwave oven repairman.  I could just walk around, knocking on people's doors, saying "pardon me, sir and/or madam, do you have any microwave ovens in need of repair?" 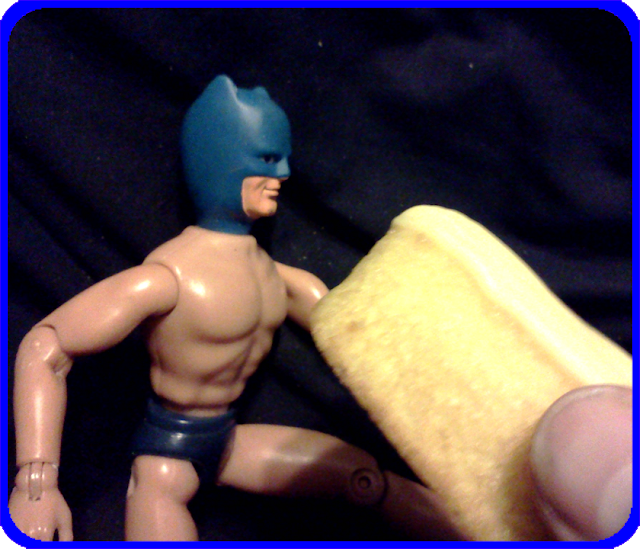 What is is:
A small yellow cake with white filling, covered with a layer of yellow frosting.

How it is:
These were pretty good, although the vanilla frosting is a little too sweet, but not as bad as the others.  The neat thing I discovered was, if you peel off the frosting (and it peels off very easily), what you're left with is a small Twinkie.  Without the frosting, it was great.

Mascot:
The Zinger Zapper.  It's Snoopy, only EVIL.

Final Thoughts
Well, that was disappointing.  It turns out that I don't actually like Hostess cakes and pies as much as I thought I did.  I'll still miss Twinkies, but all in all, I'm not nearly as broken up by this as I was.

And oh, man, am I stuffed.  After all that Hostess, I couldn't eat another bite!  Hey, wait, what's this:

Holy crap!  I forgot it was Thanksgiving, and now I'm stuffed and can't eat.  Damn you Hostess!!  Damn you straight to Hell!!!

Email ThisBlogThis!Share to TwitterShare to FacebookShare to Pinterest
Labels: Foodstuffs