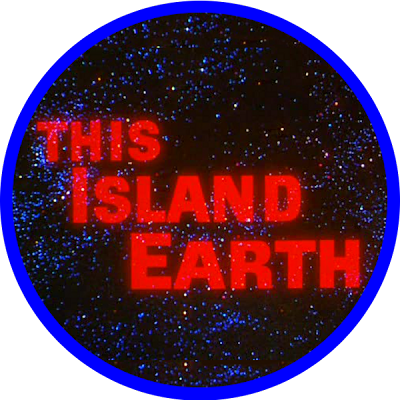 
This Island Earth (1955) - Movie review plus screencaps:
This Island Earth was considered to be a sci-fi classic at the time of it's release, mainly due to it's special effects, and being the first science fiction film to be shot in Technicolor.  It's still a colorful and fun film to look at, but where it fails for me is it's script, and as a result I have a difficult time holding the film in the same esteem as other critics.
My main objection is that the protagonist, scientist Cal Meacham (played by an actor named "Rex Reason" -- gotta love the '50s) does virtually nothing that affects the plot during the movie.  When the film begins, Meacham is given blueprints to a strange machine called an "Interocitor."  After assembling the machine, he learns that this was a test, as apparently only a genius could decipher the instructions.  It did not look especially difficult from my perspective in the audience, but I guess I'll take the movie's word for it.  Passing this test is the only thing Meacham actually accomplishes during the film.
After passing his test, he is taken to an isolated location in Georgia where he joins a group of nuclear scientists working for two men with elongated, misshapen foreheads and weird white hair, supposedly to find a cure for war.  The leader, "Exeter," is very friendly, almost too friendly.  His assistant "Brack" is creepy and always staring at the scientists like they are plotting something.  These weird looking weirdos are ridiculously suspicious.  It would have been nice if the movie could have been a little more subtle about this, and slowly ratcheted up the suspicions and tension.  The way it is, when Cal Meacham figures out that something is not kosher, it simply makes him look like a dumb-ass for taking as long as he does to do it.
After deciding that the weird looking weirdos are not to be trusted, Cal, along with two other scientists; Ruth (played by Faith Domergue), and Steve (played by the Professor from Gilligan's Island), attempt to escape.  The Professor even knowingly sacrifices his own life in order to allow Cal a chance to heroically get Ruth to safety!  Naturally, Cal still fails to escape, and is recaptured by Exeter and Brack, who are revealed to be space aliens from the planet Metaluna.  It turns out that researching a cure for war was all a ruse (gee, really?) and they were really looking for new nuclear power sources to fuel the force field around Metaluna.  It seems that Metaluna is at war with the Zagons, beings from a planet that used to be a comet (wait, what?)  that use spaceships to hurl meteors at Metaluna's surface.
Ruth and Cal are forced to travel to Metaluna to continue their research, but when they arrive, they find out that Metaluna's leader is all evil, and plans on relocating his people to Earth in a probable military conquest.  He also orders Cal and Ruth's brains to be adjusted in the brain adjusting machine, so that they won't resist.  Oh, and there are scary monsters, The Metaluna Mutants*, who do the leader's bidding, and will be guarding Cal to make sure he doesn't pull any fast ones.  The stage is now set for Cal Meacham to work his manly scientist-hero magic and save the day.  He'll need to:
Is he up to the task?  Let's find out:

1. Come up with a power source for the force field to prevent Metaluna from being destroyed.
Whoops.  Turned out he arrived too late, and the planet is beyond saving.  Oh well, maybe next time.
Score: Zagons-1,  Cal-0
2. Thwart the evil leader's plans to invade Earth
The evil leader is killed when the Zagons throw a meteor at his headquarters.
Score: Zagons-1,  Cal-0
3. Prevent his brain from being adjusted in the brain adjusting machine
Exeter decides not to put Cal in the brain adjusting machine, after all.
Score: Exeter-1, Cal-0
4. Defeat a Metaluna Mutant
Oh crap!  A Metaluna Mutant has appeared to force Ruth and Cal into the brain adjusting machine!  It looks like it's time for Cal to finally spring into action!  Oh wait, the roof just collapsed and crushed the Mutant before anything could happen.  Never mind.
Score: Collapsing Roof-1, Cal-0

5. Find a way back to Earth
How will Cal get he and Ruth back to Earth?  Umm, actually Exeter decides to take them back in his spaceship.  So, hooray for Exeter!
Score: Exeter-1, Cal-0
6. Defeat another Metaluna Mutant
Oh crap! Another Metaluna Mutant has appeared!  This one attacks Exeter when they try to enter the spaceship.  Cal runs into the spaceship, finds a metal thermos, runs back, and hits the Mutant in the head with it.  Finally Cal gets a chance to spring into action.  Hooray for Cal!  Unfortunately, Cal was too late to prevent Exeter from getting wounded, and now Exeter is slowly bleeding to death.  So maybe not so hooray.  But at least the Metaluna Mutant has been killed!  I guess we can call this one a tie.  Still, at least Cal finally gets on the scoreboard.
Score: Metaluna Mutant-1, Cal...  Oh wait, the Mutant is getting back up.
On the trip back to Earth, The Mutant returns and attacks Ruth!  Cal struggles to get free of his depressurization tube as Ruth struggles with the Mutant!  He finally breaks free just in time!  Just in time to watch the Mutant collapse and dissolve away, no thanks to Cal, due to the effects of Earth's relative lack of gravitational pressure compared to Metaluna!
Score: Earth's relative lack of gravitational pressure-1, Cal-0
Final Score:
First place is a tie between The Zagons and Exeter, with 2 points each!  Second place is a three way tie, between "Collapsing Roof," "Earth's relative lack of gravitational pressure," and The Metaluna Mutant, each with one point!  And finally, Cal Meacham fails to chart, with 0 points to his name.  Better luck next time, Cal!
When you think about it, the real hero of the film is Exeter. He's a tragic hero, since he dies failing to save his planet, but he still tried his hardest and accomplished quite a bit along the way, which is a lot more than you can say for Cal, who was basically just along for the ride.  This might have made for a pretty good movie, if they told it from Exeter's perspective.  As it stands, though, it's a colorful movie with some neat looking spaceships and aliens, but ultimately falls apart when it comes to telling a satisfying story.

*This film is sometimes considered to part of the Universal Monsters series due to it's inclusion of the Metaluna Mutants, but I think that's kind of dubious.  The other films in the series all had the monsters in starring roles, usually with distinct and interesting personalities, and stories that revolved around them.  The Metaluna Mutants are only on screen for a few minutes, have no personalities, and have little to no bearing on the story being told.

Posted by Joshua Raymond at 2:32 AM