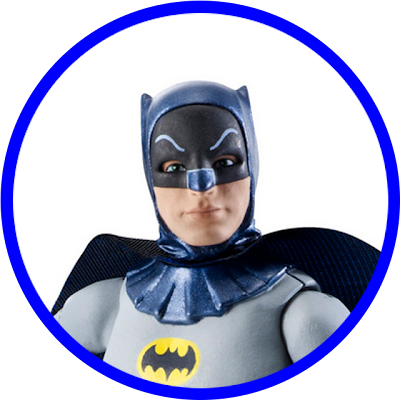 The USA Today and Entertainment Earth have revealed the first pictures from the upcoming line of Batman 1966 Classic TV Series action figures today!  The USA Today has pictures of the Adam West Batman, and the Classic 1966 Batmobile, and Entertainment Earth has pictures of Frank Gorshin as The Riddler, and Burgess Meredith as The Penguin.  According to the USA today, the 6 inch action figures and Batmobile should go on sale in July, with a price of $15.99 each for the figures, and $49.99 for the Batmobile.  And it looks like the Batmobile will be in scale for the 6 inch action figures, too.  Here's some pics:


Overall, I think these figures look really great.  The articulation on the Adam West looks a little odd, and I'm not sure they've captured his face completely... but it could just be the photo, or maybe this might be a prototype, and not 100% finished.  But if this does represent the finished product, I will still be very happy with it.  I can't wait to see more photos and get more info about these toys!
Posted by Joshua Raymond at 1:03 AM