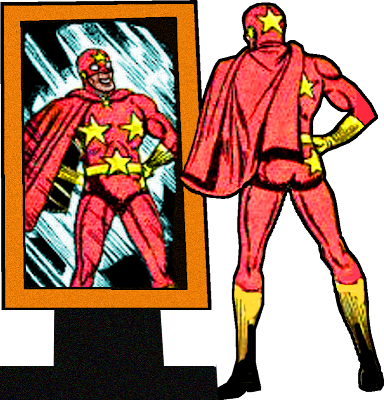 Powers / Skills: Joe Starr believed he had the ability to defy death.  He leaped off tall buildings, handled volatile explosives, and did other activities that should have resulted in him getting killed, but he always survived unharmed.

Weird Obsession:  Joe Starr believed he knew the date he would die: December 13, 1947.  Until that day, he believed he could engage in life-endangering activities and always survive.  The closer he got to that date, the more he was compelled to pull increasingly dangerous and outrageous stunts.

First Appearance: "The Man Who Could Not Die" in World's Finest #32

History:
Joe Starr was a grown man who dreamed of being a big-time gangster, but the best he was able to achieve was being an "errand boy" for Trigger Smith's gang, as well as being the butt of their practical jokes.  Feeling depressed, he went to have his fortune told by a swami, who told him he was "born under a lucky star," and that he would receive a sign about his future from the darkness.

After the reading from the swami, Joe Starr decided to rename himself "Lucky" Starr, which made him an even bigger laughing-stock to the Trigger Smith gang.   But "Lucky" had faith, and one night a mysterious newspaper blew into his hands from a dark fog.  The paper was dated one year in the future, and foretold Lucky Starr's death after taking over Trigger Smith's gang and becoming Public Enemy Number 1.

Lucky now believed that he was invincible; that he could not be killed until the date in the newspaper, and that he was destined to take over the gang and become Public Enemy Number 1.  So the first thing he did was show up at the gang's headquarters and gun down Trigger Smith in front of the other members of the gang.  After taking over as the leader of the gang, he decided he needed to look the part of a gangster, so he started dressing up in a double breasted pinstriped suit, fedora, suspenders, watch chain... red tights, a cape, and bright yellow stars.

Lucky Starr and his gang then went on to commit a series of daredevil crimes, with Lucky constantly escaping unharmed from situations that would seem to guarantee certain death. 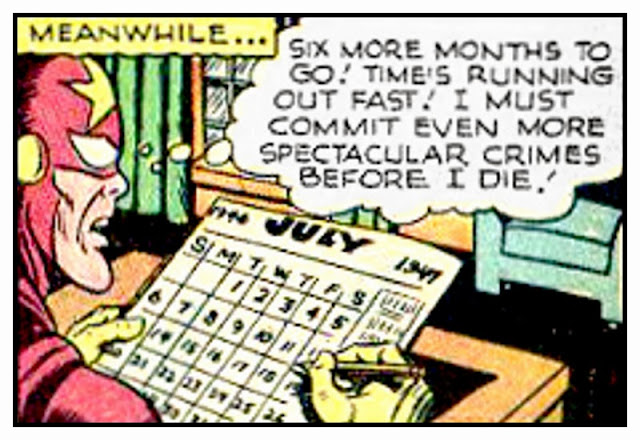 As the date of his forecasted death approached, Lucky felt the need to commit increasingly spectacular crimes.  After several encounters with Batman and Robin, Lucky decided to boast to Batman about how he could not be killed, and showed Batman the newspaper from the future.  Batman pointed out the fine print at the bottom of the paper...
It turned out that the newspaper was really a practical joke played on Starr by Trigger Smith.  Upon learning this, Lucky Starr lost his nerve and was no longer able to pull of his death-defying daredevil stunts, and was easily captured by Batman.

In a final, ironic twist, it turned out that the newspaper might have been more accurate than it seemed...

Final Analysis:
Lucky Starr had no powers, no skills, and a ridiculous costume with bright yellow stars all over it.  Yet despite all of those shortcomings, he rose to the rank of Public Enemy Number 1, and outwitted and outperformed Batman for 6 months straight before his capture.  Because of this, Lucky easily joins the wacky ranks of "Batman's Weirdest Villains."