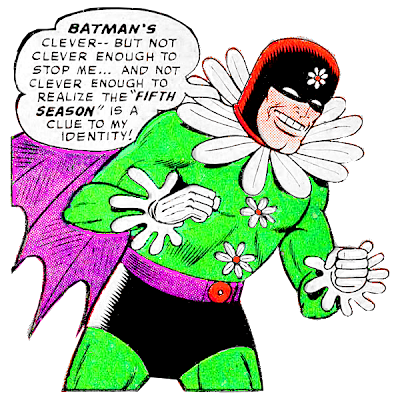 Powers / Skills: Calendar Man wears a different "calendar" themed costume, with different weapons and gadgets, for each crime he commits.  Some of these include a "spring" flower costume with a paint-filled squirt gun, a "winter" snowman costume with a freeze gun, and a "Monday" moon-man costume with a flying saucer (because Monday is named after the Moon).  It's explained in the comics that it is his skills as a stage magician that allow him to build such elaborate costumes and props.

Weird Obsession:  Calendar Man is obsessed with the calendar, and all of his crimes involve things found in a calendar, such as the four seasons, the days of the week, or holidays.  He is also one of the criminals that "gets off" on outsmarting Batman, so he leaves The Caped Crusader clues to his crimes.

First Appearance: "The Challenge of the Calendar Man" in Detective Comics #259

History:
"The Challenge of the Calendar Man" begins with a newspaper headline.  A new criminal is publicly announcing his plans for a series of crimes, and challenging Batman to stop him.  "Another crook who wants to make himself a reputation by outsmarting me," exclaims Bruce Wayne as he reads the article.  I'm guessing Batman gets fed up sometimes with all the criminals vying for his attention and leaving him clues to their crimes.  The newspaper article says the Calendar Man will commit a crime a day, four crimes corresponding to the four seasons, followed by a fifth crime corresponding to the mysterious "fifth season."
The first crime is supposed to be a "spring" crime, and Batman and Robin show up to Gotham City's International Garden Show, and find Calendar Man in the act of robbing the box office receipts.  It's bad enough for a criminal to call out Batman in public, but imagine how Batman must have felt when he saw the criminal in question was dressed like this...
What an insult!  Imagine challenging the DARK KNIGHT while dressed like a flower!  Not only that, a flower armed only with paint-filled squirt gun!  To make matters worse, Batman and Robin allow him to escape! 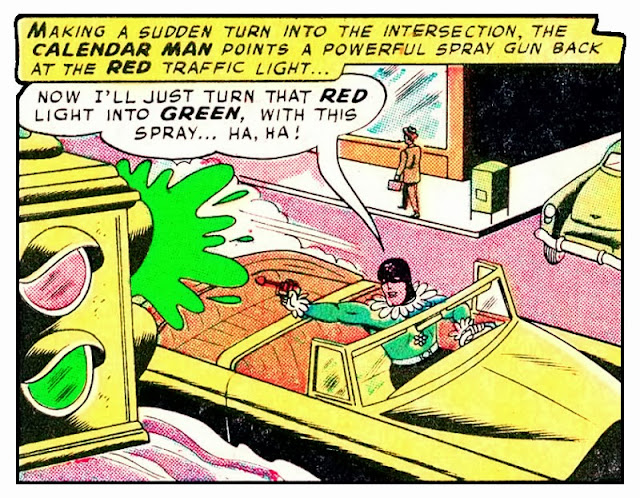 The next day, he shows up at a bathing beauty contest dressed up in a flame-shooting "summer" sun themed costume, and once again, Batman and Robin fail to catch him.  At least this time, he was wearing a serious looking costume, and had a deadly weapon.  But still, letting him escape twice can't be good for Batman's pride.

For his next crime, though, Calendar Man shows up wearing a yellow dress, red tights, a football helmet, and a cape.  And his weapon?  A fan that blows leaves everywhere.  At this point, it becomes clear that Calendar Man is just f---ing with the Bat.

Even worse, Batman and Robin get caught in traffic, or something, and don't even show up in time to fight him.  By the time they arrive, Calendar Man is long gone.  The Dynamic Duo literally walk away with their heads held low in shame, while people on the street vocally pity them. 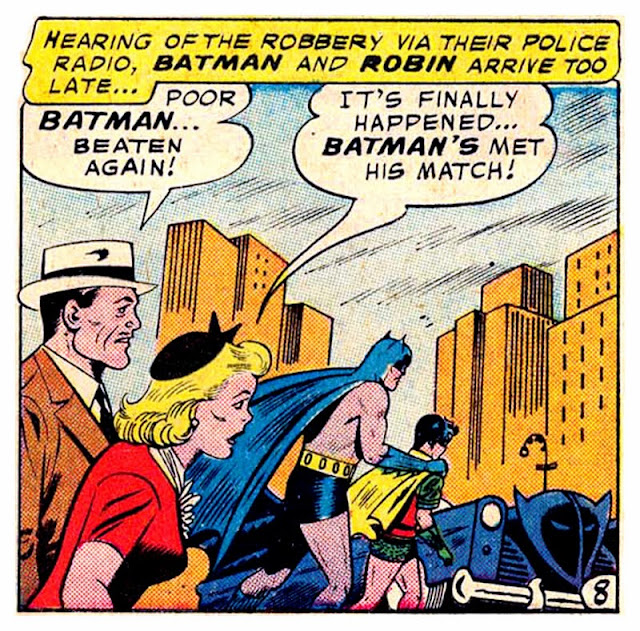 You wouldn't think that Calendar Man's costumes could get any more insulting.  That is until you see him show up for his "winter" crime dressed as FROSTY THE FREAKING SNOWMAN, and once again, escape scot-free.  At least he didn't sing "Jingle Bells, Batman Smells."  Still, Batman and Robin must be feeling pretty impotent at this point. 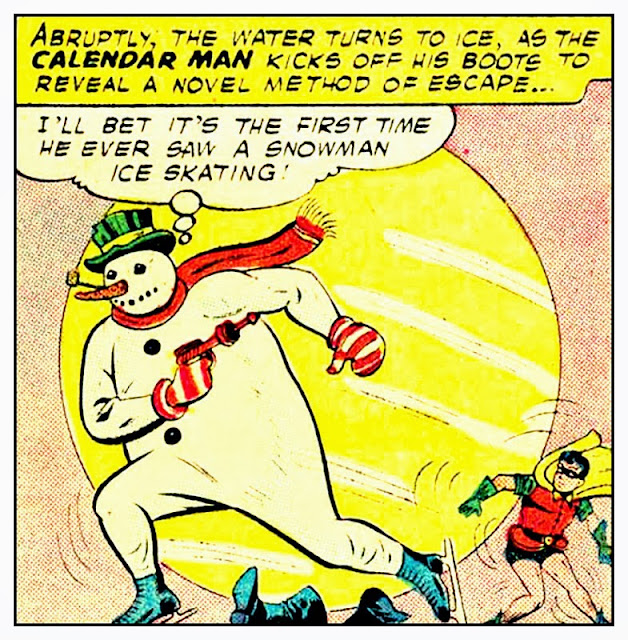 Batman and Robin's only hope at this point is to figure out what the mysterious "fifth season" is, and stop the Calendar Man before he gets a chance to act again.  Using the sort of "logic" that only exists in comic books, the duo deduce that "only a magician could have dreamed up those tricky gimmicks," and that the fifth season must refer India's monsoon season, therefore the criminal must have an Indian name!  So naturally, the Calendar Man must be none other than "Maharajah the Magician!"  It makes perfect sense!
Batman and Robin then show up in the magician's dressing room, and listen to him as he "plots his final crime" by talking out loud to himself.  After a tense stand off, Maharajah quickly unwraps his turban, and throws the cloth at Batman and Robin, allowing himself to run past them and escape, despite the fact that the Caped Crusaders were standing in the doorway blocking his path.  It's almost as if Batman and Robin were so dumbfounded by his ridiculous attack, sort of like, "WTF... did that guy just throw some loose cloth at us," that they froze up and couldn't react.

Finally Batman comes to his senses and throws a chalkboard calendar at the Calendar Man's legs, tripping him up and allowing him to be captured.  The final panel with Maharajah in it shows him rubbing the side of his head, which probably indicates that Batman beat his ass off-panel.  The "comics code" of the time didn't allow then to show stuff like that, but you know that Batman wasn't going to let all of those insults go unpunished.   And then, of course, Batman unleashes the most terrible punishment of all...

After his initial appearance in 1958, The Calendar Man didn't reappear again until 1979, in Batman #312's "A Caper a Day Keeps the Batman at Bay."  This story is pretty similar to the original, except this time Calendar Man is committing 7 crimes, based on the days of the week.  The costumes aren't quite as insane in this one, but it does introduce his "calendar" themed costume that he wears when he is not committing a specific calendar crime.  After this appearance the Calendar Man appeared sporadically throughout the years, and is generally treated as a b-grade, "joke" villain, rather than as a serious adversary for Batman. 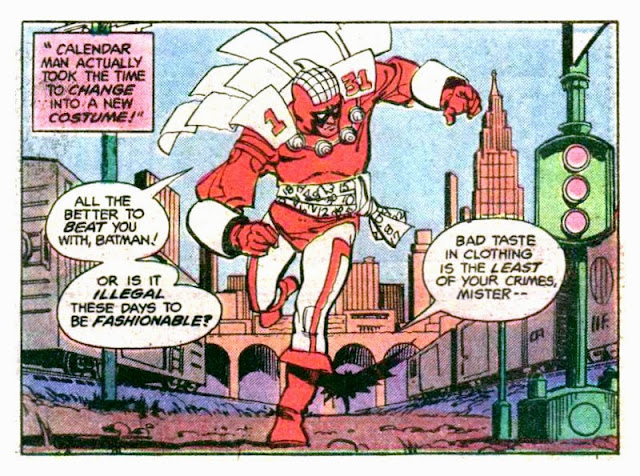 Final Analysis:
While hey may be seen as a "joke" villain, I can't help but respect a guy who has the audacity to challenge Batman while dressed as a pretty flower.  It may be the single goofiest, and therefore most-awesome, costume Batman has ever had to face off against.   Add to that his Frosty the Snowman outfit, all his other ridiculous costumes, and his bizarre need to announce his crimes ahead of time in the newspaper, and The Calendar Man easily joins the wacky ranks of "Batman's Weirdest Villains."

The Lemon Drops - I Live In The Springtime


The Bangles - Hazy Shade Of Winter

Posted by Joshua Raymond at 5:08 AM