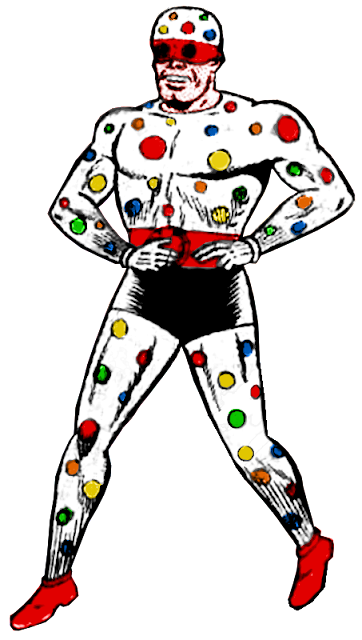 Powers / Skills: Mr. Polka-Dot is a genius inventor, who created a white jumpsuit covered in colorful polka dots.  When removed from his costume, the dots transform into powerful weapons.   The level of technology employed in his polka dots is so high, that it almost seems like magic, and must have cost billions of dollars to develop and create.

Weird Obsession:  Mr. Polka-Dot, much like the Harvey comics character Little Dot, is obsessed with dots and spots.  He uses his amazing, incredibly valuable and high-tech polka dot suit to commit dot-and-spot-related crimes, like robbing a carpet cleaning company called "Spot Service," or robbing a nightclub called "The Ink Spot." He has his secret headquarters painted with dots as well, and he peppers his speech with dot and spot puns.

History:
"The Bizarre Polka Dot-Man" begins with Batman and Robin wandering around on the rooftops of Gotham City when, as the narrator puts it, "they sight the first stirring of evil."  The evil in this case is three shadowy figures sneaking into the "Spot Service" carpet cleaning plant via the skylight.

The Dynamic Duo burst in to find two criminals burgling the carpet cleaners' safe.  These two guys are no match for Batman and Robin, but then the third criminal shows himself, and he's a weirdo in polka dot covered spandex!  The weirdo introduces himself as "Mr. Polka-Dot."


First, he pulls one of the polka dots off of his suit, and it becomes a flying buzz saw that nearly decapitates Batman and Robin!  Then, he pulls of another, and it becomes a flying saucer that flies the criminals to safety, along with their stolen loot!  Then, as if he hasn't humiliated Batman and Robin enough, he issues them a challenge as he flies away.  (Note to criminals: Please do not "challenge" Batman.  This will always end up with you getting punched in the face.)

Mr. Polka Dot then goes on a massive dots-and-spots-related crime spree throughout Gotham City, with his polka dot gimmicks leaving Batman and Robin in the dust at every turn.  The newspaper headline reads "Polka-Dot Man Drives Batman Dotty!"


Eventually, Batman and Robin have to split up, to cover different sides of the town in their patrols.  This leaves Robin vulnerable, and he is kidnapped by Mr. Polka-Dot after succumbing to an extremely bizarre polka dot attack:


Robin doesn't stay kidnapped for long, though.  He uses braille to send a secret message to Batman (Oh, the irony!  Using raised dots to trick the master of dots).  Then the duo bust in on Mr. Polka Dot and his gang as he commits his latest robbery.  But this time Batman figures out the perfect way to defeat Mr. Polka-Dot.

First, he shines a bright light in his eyes. 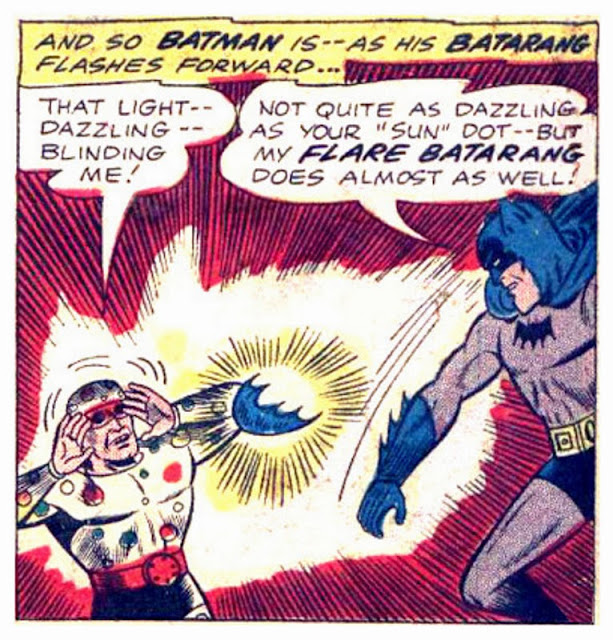 Then, he punches him in the face.

Gosh!  I wonder what inspired the creation of "Mr. Polka-Dot?" 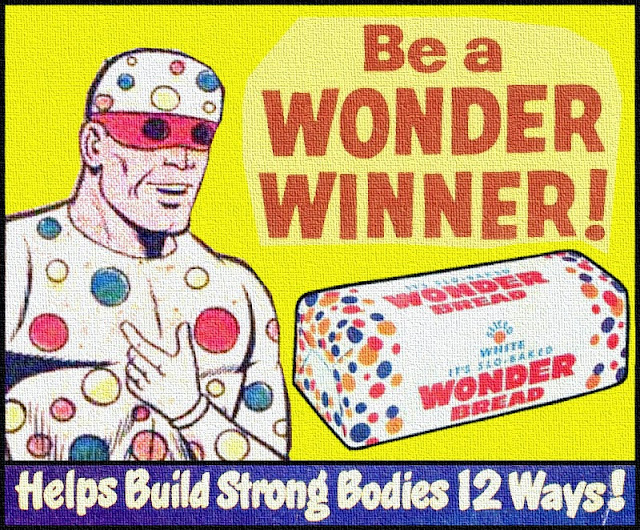 History (Continued):
After his initial appearance in 1961, Mr. Polka-Dot didn't show up again until Batman: GCPD #1, in 1996.  In this comic, Mr. Polka-Dot has hit an all-time low, and no longer has any of his electronic polka dots.  Now just wearing a functionless polka dot suit, he attempts to rob a jewelry store with a baseball bat.  During the robbery, Mr. Polka-Dot breaks a cops knee with his baseball bat.  Harvey Bullock then takes the bat away from Polka-Dot and beats the crap out of him with it, putting him in the hospital.  After he recovered, Mr. Polka-Dot had a couple of minor run-ins with Nightwing and Batgirl.  In the miniseries Final Crisis Aftermath: Run! Mr. Polka-Dot was recruited by General Immortus, along with a variety of other criminals, and given new, upgraded powers, only to be killed off by the Human Flame.

He's also made several cameo appearances on the Batman: The Brave and the Bold animated series.


Final Analysis:
With his amazing costume, Mr. Polka-Dot should have been a legendary criminal.  I mean, he could do practically anything with those dots.  But, no matter how awesome his crime gimmicks were, no one is going to take seriously a grown man who is obsessed with polka-dots, and dresses like a loaf of Wonder Bread.  He might not have had what it takes to join the elite ranks of Batman villains like The Joker, The Penguin, or Catwoman, but he easily qualifies for the wacky ranks of "Batman's Weirdest Villains."

Posted by Joshua Raymond at 9:17 PM