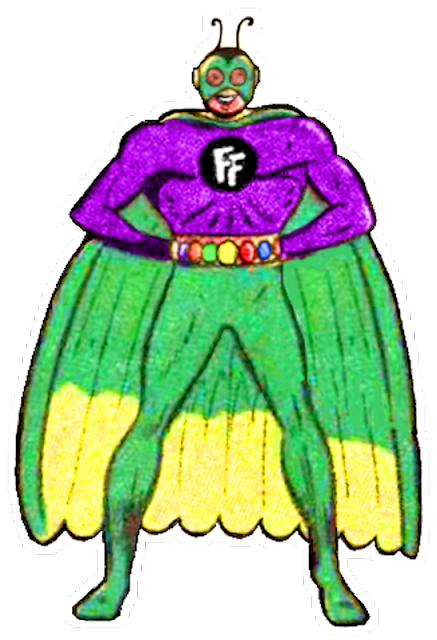 Powers / Skills: Firefly wears a belt with a variety of multicolored light bulbs on it that project rainbows, as well as other forms of light.  As well as making rainbows, Firefly can use his lights to bleach away color, simulate fire and lightning, or to help him pretend to be a lighthouse.  Mostly he just shines his bright lights in people's eyes.

Weird Obsession:  Firefly is obsessed with color and light, and all of his crimes involve things like light bulbs, rainbows, light reflecting gems, colorful paintings, etc...

History:
In "The Human Firefly,"  we are introduced to Garfield Lynns, who describes himself as "The World's Foremost Lightning-Effects Genius."  One thing we find out right away is that the dude loves the sound of his own voice, and he constantly talks to himself in long, self-aggrandizing monologues.  Fed up with living on a "meager salary,"  Lynns hires a group of thugs and decides to rob all the wealthy patrons of the latest Broadway-by-way-of-Gotham-City musical he is working on, the snappily titled "Aqua-Melodies of 1952."  Unfortunately for The World's Foremost Lightning-Effects Genius, those wealthy patrons include young Dick Grayson, and his handsome male mentor Bruce Wayne.  The duo quickly change into their crime fighting gear as Batman and Robin, and coral all of Garfield's henchmen. 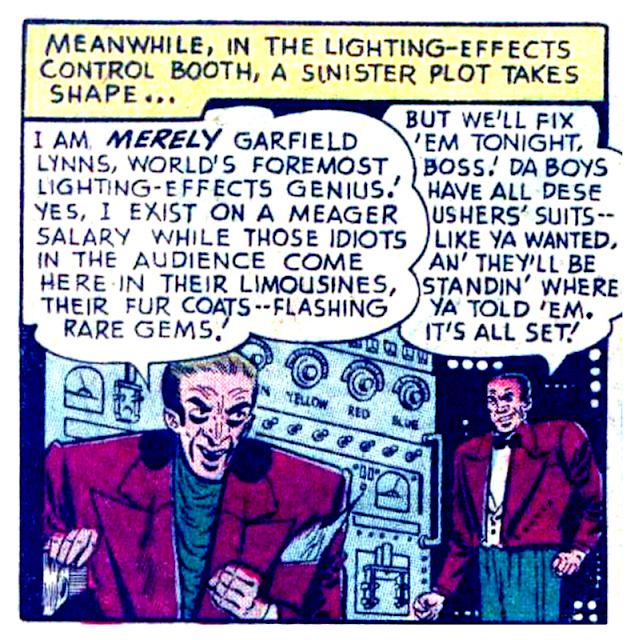 Lynns shoots one of the criminals dead when it appears that he is about to sell him out to Batman.  This proves to be a mistake, though, because he is now a wanted murderer, plus, he realizes that Batman and Robin are going to figure out it was him, anyway.  Batman and Robin pursue Lynns out into some swamp or something, but get confused when they look at a firefly, giving Lynns the chance to escape.
Lynns is so inspired by the little firefly that allowed him to escape from Batman and Robin that he decides to start calling himself "The Firefly," and gives a speech about it to himself, while grinning like a madman, and covered in beads of sweat.  I guess he's going insane here...  kind of like that scene in "The Killing Joke" where the Joker emerged from the pool of chemicals that bleached his skin, and started laughing maniacally.  Then again, though, Lynns was also grinning like a madman and giving a crazy monologue in the very first panel we see him in.  Plus he also had that big, crazy-looking, open mouthed smile on his face after he crashed his car, and was crawling around injured in the swamp trying to escape Batman.  So, maybe he was just nuts from the get-go. 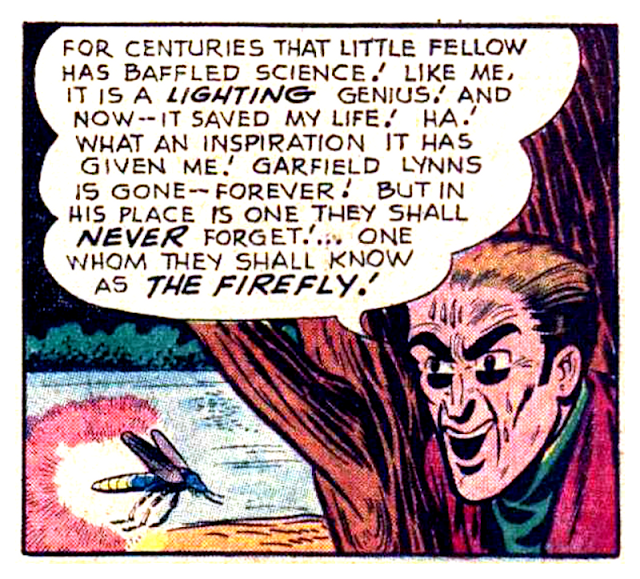 Like most lighting-effects technicians, Lynns keeps a hidden cave under a barn, where he conducts secret lighting experiments.  Nothing unusual about that.  After he escapes from Batman and Robin, Lynns goes to his mystery cave, where he designs a purple and green bug-man costume , as well as his rainbow-projecting light bulb belt.  Then he's off to commit crimes as The Firefly! 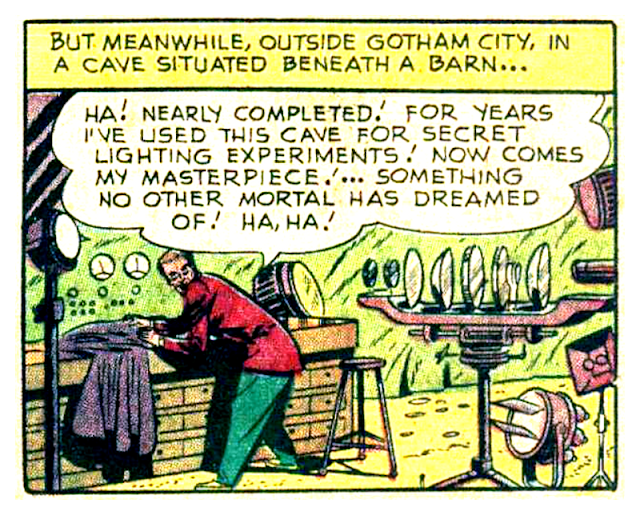 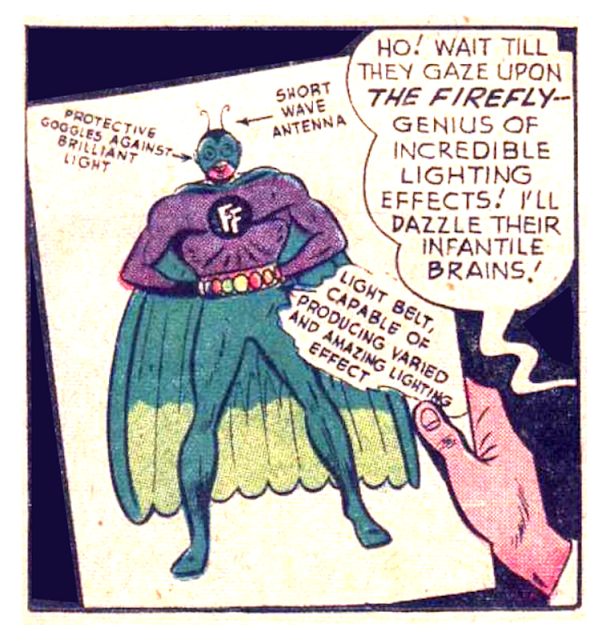 The Firefly then goes on a crime-spree that includes robbing a museum and a sea freighter.  He also manages to imprison Batman and Robin in a lighthouse.  Instead of killing them, though, he traps them in a room where a dazzling rainbow will shine on them for 3 DAYS STRAIGHT!  The fiend! 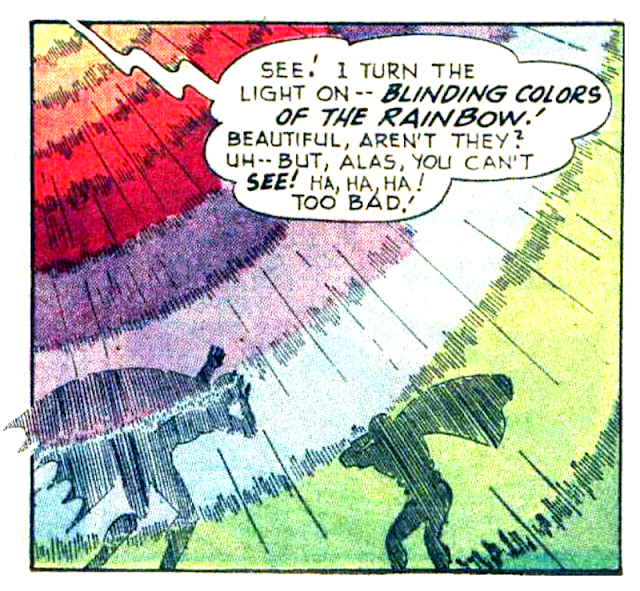 Batman uses The Firefly's light tactics against him, however.  First, he uses the light from the lighthouse to send a message to the coast guard in Morse code.  Then he shines a rainbow light right back at The Firefly and his henchmen, blinding them and allowing them to be captured.  To add insult to injury, as Firefly is arrested, both Batman and Robin inflict the cruelest punishment of all on him: insulting puns.
"The Human Firefly" was published in 1952.  This version of The Firefly (there was another, one-shot character with the same name in '59) did not appear again until 1975, when he fought The Creeper in 1st Issue Special #7, in a story called "Menace of the Human Firefly."  He next appeared  in a back-up story from a 1986 issue of The Outsiders.  To the best of my knowledge those are the only three appearances of the original version of The Firefly.  After that he was retconned into an explosion and pyrotechnics artist, turned costumed pyromaniac, and that's the version that has existed in the comics into the modern era.  However, the colorful and goofy original version did have one last appearance in 2010, in a bar-fight scene from the animated series Batman: The Brave and The Bold, that was jam-packed with some of Batman's most colorful and weird villains ever. 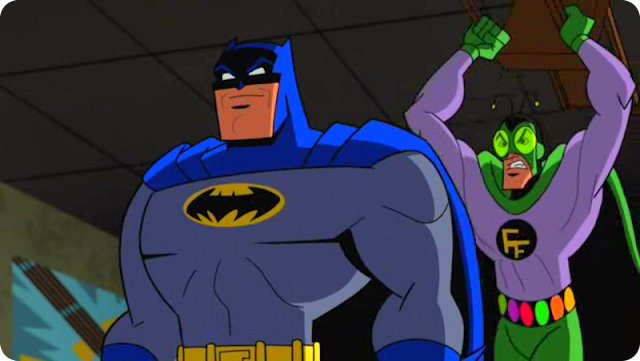 Final Analysis:
With his constant, open-mouthed grin, his purple and green costume, bug antennae, "double-F" logo, and light bulb belt, the original version of The Firefly was one of the goofiest looking Batman villains ever.  Add to that his main power being "rainbows," and The Firefly easily joins the wacky ranks of "Batman's Weirdest Villains."

Dio - Rainbow in the Dark

Posted by Joshua Raymond at 6:08 AM