This year for the Countdown to Halloween, ThEpicReview had "ThEpicReview's 2013 Halloween Grab Bag Contest."  There were three ways to enter the contest:
I never sent in a "fun size" review, or a picture of myself with a pumpkin, but I did comment on three of the participation threads.  So I wasn't spamming the contest or anything like that, but when it came time to "draw the names out of a hat," as it were, I ended up winning two of the three prizes!  Crazy, right?  Yeah, CRAZY AWESOME!

The first prize was "Decayin' Dom" a figure from series 1 of S.L.U.G. Zombies.  This was pretty cool, because I've always been interested in the S.L.U.G. Zombies, but somehow never pulled the trigger when it was time to pop some in the old shopping cart.  So now I have my first S.L.U.G. Zombie.  I just hope that it doesn't start me on a craze of collecting more S.L.U.G. Zombies, Monster in My Pockets, M.U.S.C.L.E. Men, and other similar mini figures, because I've got enough weird toys that I collect as it is!  Then again, those Garbage Pail Kids MiniKins have been catching my eye lately... oh my god, it's started already!

The second prize was my favorite, this great Kenner "Legends of Batman" Catwoman figure: 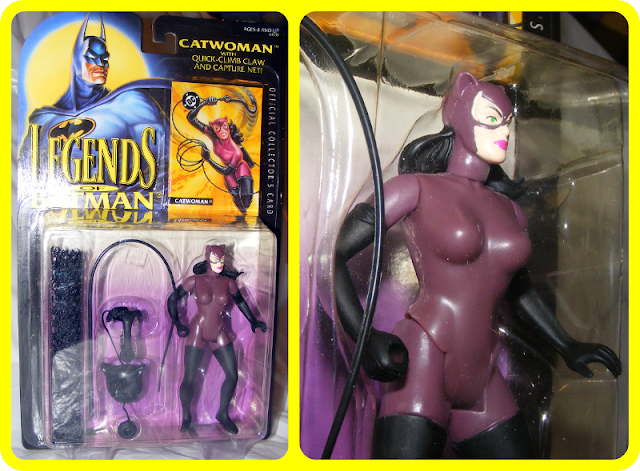 This was perfect for me, because I've been wanting one of these for my Batman collection for a while now.  In fact, I've come close to buying one of these on eBay a few times.  Be sure and check out ThEpicReview's action figure review for this figure, to see how cool it is.  The only problem for me with this toy is that the card is in such nice shape, that I don't want to open it.  So I'm probably going to save this one on the card, and still look for a second figure loose to display with my other action figures.

So, thanks to "Barbecue17" from ThEpicReview for these awesome prizes!

Ministry - (Every Day Is) Halloween

Posted by Joshua Raymond at 2:20 AM