From the far reaches of space comes this strange, claw-handed, black-clad creature!  Is he man or machine?  Is he friend or foe?  He is... Clawtron, and he's the vintage action figure at the focus of today's edition of Retro Friday's!  Read on to learn more!

Debuting in 1975, the Fisher-Price Adventure People were one of the original lines of 5 points of articulation, 3 3/4" action figures.  They were designed to be played with in conjunction with vehicles and playsets, and they were a huge influence on Kenner when they were designing their original Star Wars action figures.  The Adventure People started off featuring "real life" adventures, like safaris, camping, race car driving, and scuba -diving.  But as the '70s  progressed and the Star Wars inspired sci-fi craze went in to full gear, the Adventure People followed suit with aliens, robots, and spaceships.

Clawtron is one of these sci-fi figures.  First released in 1980, Clawtron is a robot made of black plastic, and has some silver, blue and yellow paint apps.  Clawtron reuses the head from the Adventure People race car drivers, and the legs from their motorcycle riders.  His most interesting feature are his arms, which have metal claws instead of hands.

The figure has no description on the card, so kids could decide if he was a good or evil character, and whether he was truly a robot, or perhaps an alien, a cyborg, a clone, or something else entirely.  The only clue to Clawtron's backstory is that the card art shows one Clawtron in the foreground, and a second Clawtron walking in the background, suggesting that he is just one of a series of Clawtrons.  That's cool, as it gives me an excuse to collect multiple copies of this guy: he's an army builder! 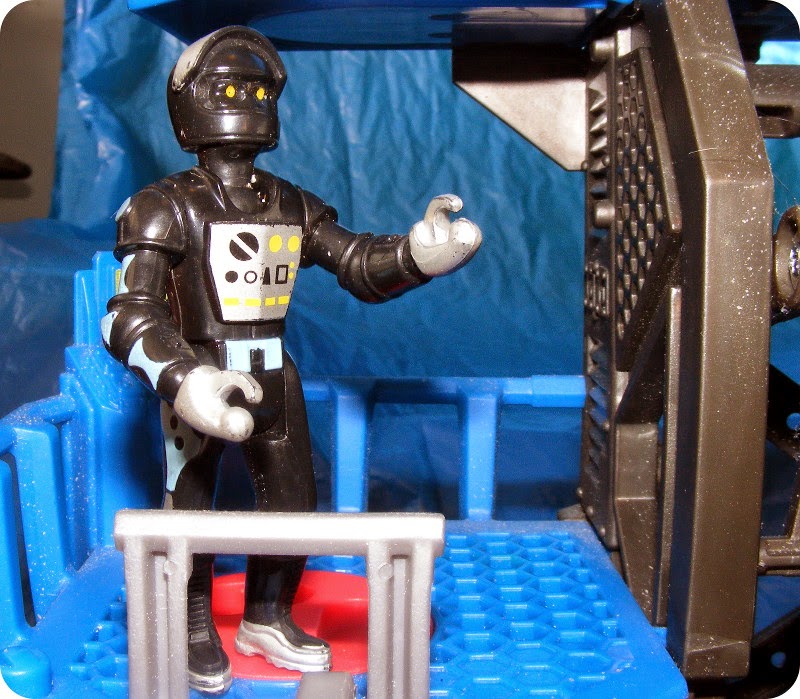 In typical 3 3/4" vintage figure fashion, Clawtron has 5 points of articulation at the arms, legs, and neck.  Like most Adventure People, Clawtron has a ball jointed neck, which gives his head a greater range of motion than most old school 3 3/4" figures.