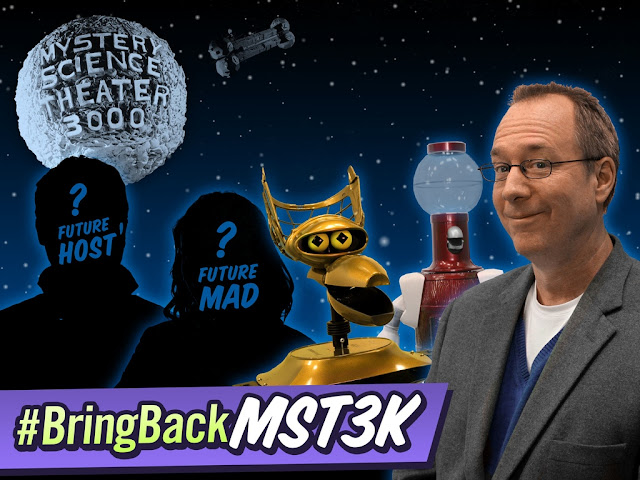 Wow!  ANOTHER one of my favorite TV shows from the 1990s looks to be coming back.  First it was Twin Peaks, then the X-Files, and now it's MST3K!  Yesterday, Mystery Science Theater 3000 creator Joel Hodgson announced a new Kickstarter campaign to bring back MST3K.

Mystery Science Theater 3000 started off as a local show in Minneapolis, then went on to national runs on Comedy Central and the Sci-Fi Channel.  It originally starred Joel Hodgson as a man who was trapped on a satellite in space, and forced to watch cheesy movies as a psychological experiment by mad scientists.  Joel coped with this by building robot sidekicks who could watch the movies with him and hurl jokes and insults at the screen.  Later Joel was replaced by a new host played by Mike Nelson.  There were also several different mad scientists and robot voice actors over the years.

The new version of the show that Joel is pitching would feature a new cast as the host, the mad scientists, and the voices of the robots, but Joel says he has invited the previous cast members and writers to return to the show to make cameo appearances or work behind the scenes.

Joel needs a minimum of 2 million dollars to produce three new episodes of the show.  If the Kickstarter exceeds the minimum, they can make even more episodes, up to a total of 12.  It breaks down like this:

Joel hopes to go beyond these episodes, as well.  He believes that if he can show television channels or streaming networks that the fan demand is great enough to fund new episodes, he should be able to secure a new home for MS3TK either on TV or online.  But it sounds crazy, doesn't it?  I mean we are talking about millions of dollars!  But guess what, in a little over one day, people have already pledged over $1 million dollars to this project!  Amazing!  There are still 30 days left to go on the Kickstarter, so the odds are looking pretty good that we'll get the full 12 episodes!  Why don't you go the Kickstarter page and check it out for yourself!

BringBackMST3K.com
Posted by Joshua Raymond at 9:02 AM