This is an odd but fun playset that I just bought from Amazon.  It's a dungeon tower playset with 5 action figures and a few accessories for $26.  That's more than worth it for the action figures alone!  In fact, I already had 3 of the 5 figures, and I was mainly buying it for Dracula and Skeleton Man, but even then, two figures and a playset for that price was worth it for me.

The toys come packaged in a cardboard box shaped like the Mystery Machine, which is a fun touch.

The package lists the contents as:
The tower is a curiosity.  One thing I noticed about it right away, is it has hinges on the sides, like it is supposed to be attached to another toy.  Was this once part of a larger castle or haunted house set, and is now being repurposed as a standalone piece?  That's what it looks like, but what this other playset was or is, I have no idea. 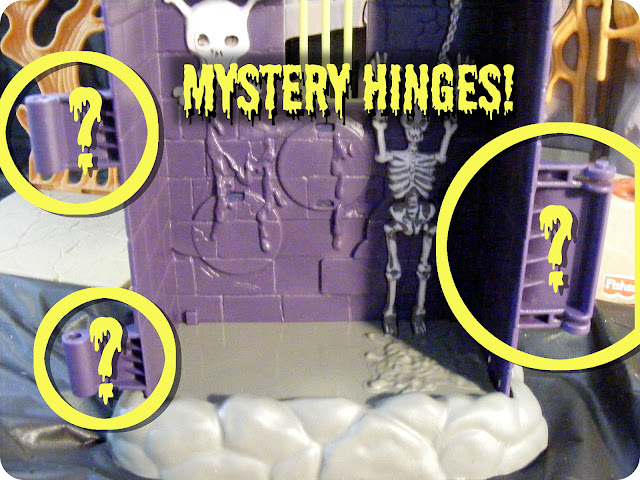 There is a cauldron on the top of the playset, with a small hole that goes down into the dungeon tower.  Additionally, one of the plastic coins that the set comes with can fit into a slot in the cauldron and block that hole.  It looks to me like this may have been a "slime" playset before it was repurposed.  You could put a figure in the tower, fill the cauldron with slime, and then remove the coin from the slot, causing the slime to ooze down onto the action figure.  I don't have any slime handy to try this out, but that's what it looks like to me. 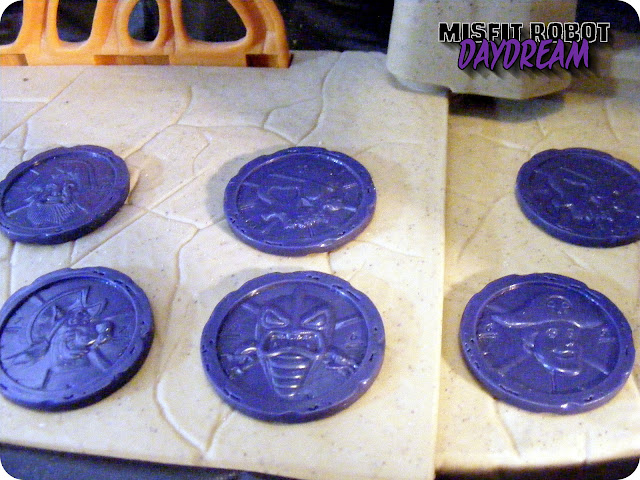 The coins are another oddity.  They all have a pirate skull on one side, and the face of a Scooby-Doo character on the other.  The 6 coins that I got had 1 Ghost of Redbeard, 1 Pirate Scooby, 2 Pirate Freddies, and 2 The Beast of Bottomless Lakes.  There are holes on the outside of the tower that the coins pop in to.  What purpose is being served by this?  I don't know.

The "Torment Table" is a small table that fits neatly into the tower, or can be removed.  It's not clear where the "Torment" aspect of this comes in to play.  It's basically just a little coffee table.


The 5 action figures are all great looking figures that look to have stepped straight out of the cartoons.  However, the articulation on the figures varies greatly.

Dracula's arms rotate up and down at the shoulders, and that's it, no other articulation.  His head is a separate piece and FEELS like it should rotate at the neck, but it doesn't on my figure, and I didn't want to try and force it and accidentally pop it off.

The 10,000 Volt Ghost has cut joints at the shoulders to move his arms up and down, and has hinges at the knees and elbows.  No articulation at the hips, though, so the knee hinges are mostly pointless, because if you bend them the figure won't be able to stand up.  One of my figures elbows is stuck, you can see paint pooled up in there gluing it shut.  I could probably get some paint thinner and clean it out and get the thing moving if I choose to do so.


Skeleton Man and Shaggy are articulated at the neck, shoulders, elbows, hips, and knees.  Scooby has all of that PLUS a rotating tail, so I guess he wins.

It's kind of weird, though.  The figures are all from the same line, yet they range from 2 points of articulation to 8 points.  However, this is a line aimed at kids, not adult collectors, and most kids aren't going to be terribly concerned with how many points of articulation a toy has, they just want to bash them around and have fun, and these figures seem perfectly good for that.