The Scooby-Doo Mystery Machine Playset from Character Options is available from various online retailers right now.  It contains three action figures and a Mystery Machine that unfolds into a sort of "Mobile Command Center" type deal.  The Mystery Machine can fit two figures in the front seats, although Scooby doesn't really fit in there very well unless you hang his head out the window.  Any of the human Scooby gang will fit in there just fine.  There is also some room for more figures in the back of the van, so if you don't mind cramming them in there awkwardly, you could probably transport the whole Scooby Gang.

The three action figures are Freddy, Scooby, and a ghost.  The Scooby figure is the same one that I reviewed earlier this month, and the Freddy figure feature the same articulation as the Shaggy figure from that review, so check that review out for more information.  (http://misfitdaydream.blogspot.com/2018/10/scooby-doo-fiendish-foes-tower-playset.html) The third figure is the ghost, but calling it an "action figure" would not be accurate, because it has no articulation, it's just a solid piece of white plastic with two eye holes painted on.  That was kind of disappointing, although it does make a nice looking prop.  It's probably just best to think of it as an accessory to the playset rather than an actual action figure.

The Mystery Machine has wheels that actually roll.  The front doors don't open, but there is a flap above the seats that opens to make it easier to position the figures in the driver and passenger seats.  The back of the van unfolds into a multi-level playset.  It has some sculpted mechanical  details and instrumentation, and some stickers ot add more details.  The actual purpose of the sculpted and sticker details is undefined, which is fine.  It mostly just left open to a kid's imagination.


These Scooby-Doo toys seem to be constantly repackaged and resold under different configurations, so you should shop around to get the best version of this toy.  For instance, as I write this review, there is a version of this that comes packaged with just the Freddy figure, and has no stickers inside the van, that is priced at $41.94 on Amazon, while another listing has the version I reviewed with all three figures and the stickers for just $17.99. 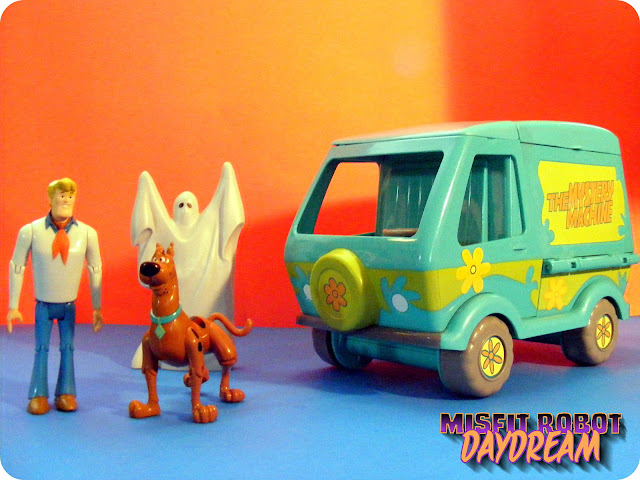 Posted by Joshua Raymond at 8:53 AM