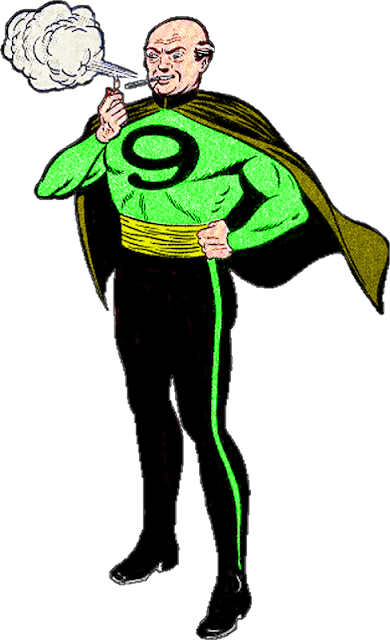 Powers / Skills: Paul is a former stage magician who has come up with a fantastic series of illusions to fake his own death.

Weird Obsession:  Paul wants to become famous by seeming to die nine times, so he will be known as "The Man With 9 Lives." He also wears a green spandex costume, with a cape, and the number 9 printed on it.

First Appearance: "The Outlaw Who Had Nine Lives" in Detective Comics #72

History:
Paul Gregorian is basically the Gob Bluth (from Arrested Development) of the comics.  Originally Paul Martin, he was a stage magician who got into some unspecified legal trouble, and was banned from performing by the Magician's Union.  Like Gob on Arrested Development, Paul Martin was desperate to resurrect his magic career.   So, Paul Martin crafted a new identity, as Paul Gregorian, and spent ten years developing a weird costume, and a series of stunts where he would repeatedly fake his own death, hoping to become world famous as "The Man With 9 Lives."

Initially, Batman is brought into the story because he thinks Paul Gregorian is a mental case trying to commit suicide.
After dying repeatedly in a series of crazy stunts, then coming back to life, Gregorian's fame grows, just as he had planned.  Both Commissioner Gordon and Batman are disturbed by this, though, and they continue to pursue the mystery of how he keeps dying and coming back to life.

Paul is recognized in the newspaper by his brother Hoofer Martin, who is the head of a local gang of criminals.


Hoofer uses his knowledge of Paul's real identity to blackmail him, forcing Paul to use his magic tricks to help Hoofer's gang commit crimes.  Weirdly, Paul dons a domino mask when he commits the crimes, like he wants to be incognito... but he continues to wear the green spandex number 9 costume.


Eventually, the crime gang is so successful, that they start boasting to the newspapers about the crimes they are going to commit ahead of time.  Criminals in Gotham City are weird.  No matter how many millions of dollars they steal, they aren't happy unless they make announcements and challenges in the newspaper, and make Batman and the Gotham City Police look like chumps. 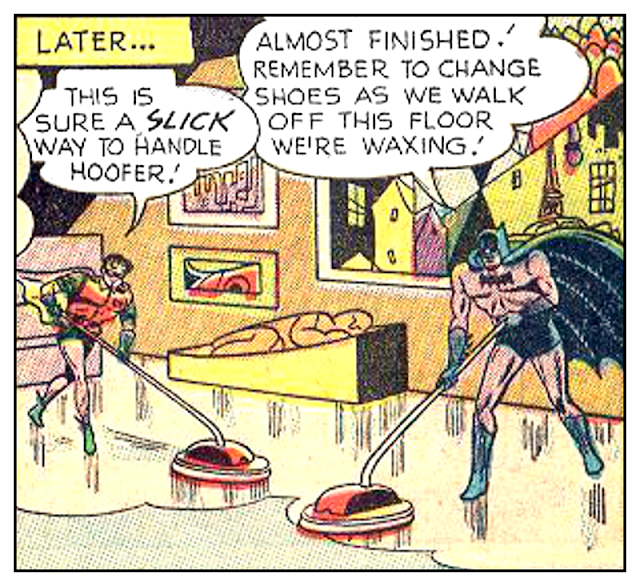 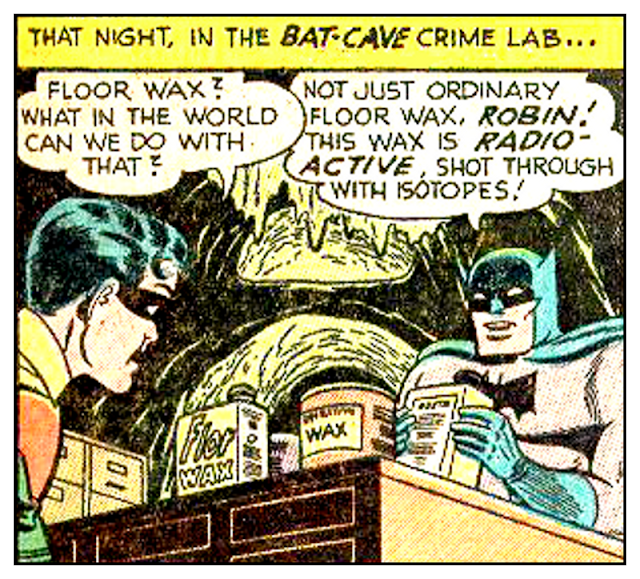 Oh, O.K.  It was RADIOACTIVE floor wax.  Now it all makes sense.

Batman and Robin then use Geiger counters to follow the gang's radioactive footprints back to their hideout.  Then this happens:

Final Analysis:
With his one and only appearance, Paul Gregorian made quite an impression (and not just on the brick wall where he cracked open his head).  A short, slightly overweight man, with balding and greying hair, wearing skin-tight green spandex, a cape, and the number 9 on his chest.  That's a visual that's hard to forget.  Add to that his gruesome and pointless death, and Paul Gregorian easily joins the ranks of "Batman's Weirdest Villains."