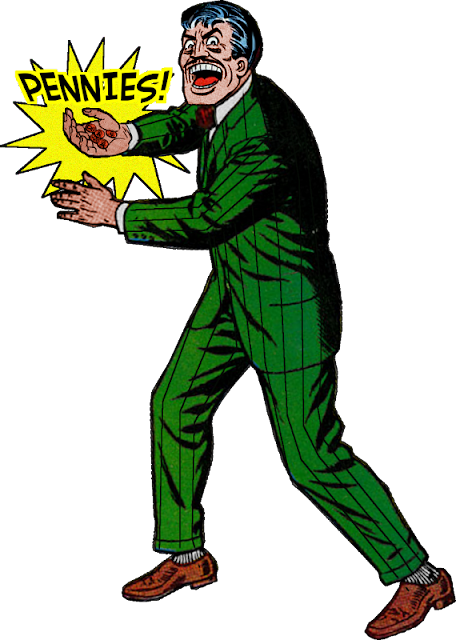 Powers / Skills: The Penny Plunderer's skills mainly consist of throwing loose pennies at people, or hitting them in the head with a roll of pennies.  He also occasionally rigs up rolls of pennies or penny slot machines as smoke bombs.

Weird Obsession:  The Penny Plunderer has a bizarre love/hate relationship with pennies.  He blames pennies for all his problems in life, yet he is obsessed with them as well, and bases all of his crimes around pennies.

History:
In "The Penny Plunderers," we are introduced to a sad-sack named Joe Coyne, and witness a quick history of his life, from childhood to adulthood.  As a child, he was bitter because he only earned pennies as a newsboy.  As an adult, he gets fired from his office job, when his boss catches him gambling on the job by "pitching pennies."  Finally, he turns to a life of crime, but is caught during his first robbery attempt, and sent to prison.  Plus, in an ironic twist, the cash register he was trying to rob only had pennies in it.  While in prison, he has a mental breakdown, and blames pennies for all of his troubles in life.   In his mania, he decides to rededicate himself to crime, and vows to make pennies his "crime symbol."  Whatever that means.
Upon Coyne's release from jail, he opens a penny arcade in Gotham City, which he creatively names "Penny Arcade."  But the business is really just a "front" for his crimes.  He then puts together a gang, and embarks on a series of penny-related robberies.  This quickly gets the attention of Bruce Wayne and Dick Grayson, who both peg him as nut-job from the get-go.

Batman and Robin confront The Penny Plunderer at the scene of his next crime:  a showing of a rare and valuable "penny stamp" at a local stamp and coin exhibition.  The exhibition features giant sized replicas of the stamp and of a penny, which is too much for the Plunderer to resist.  But Batman and Robin fail at their task, as Coyne defeats both of the heroes, by throwing pennies at them.

Although Joe Coyne gets away, Robin manages to capture "Skinny," one of the Plunderer's gang.  Batman interrogates the criminal and gets the location of the gang's hideout.  Then Batman and Robin leave Skinny with the police, and head to the hideout to capture Coyne and the rest of the gang.  Yet somehow, before the Caped Crusaders arrive, Coyne manages to send another one of his men to intercept the police, and free Skinny.  Then they take Skinny back to the penny arcade.  At first Coyne acts like he's happy to see Skinny, but then asks Skinny to step on a fortune-telling penny scale that he has in his shop.  The fortune has been rigged by Coyne, and reads:

"YOUR FORTUNE
It isn't good!
Your future is very dark!
The future is always dark for
STOOL PIGEONS!"

Skinny is then tied up to the penny arcade's shooting gallery, which apparently uses real rifles and bullets, and Coyne murders him.  Then, the gang hides out in the shadows, and wait for Batman and Robin to show up.  Then, finally, the Dynamic Duo arrives, despite the fact that they left first.  Maybe they took the Batmobile through a drive-through along the way and picked up some burgers.

Batman and Robin put up a good fight, and manage to beat up the rest of the gang, but they are still no match for The Penny Plunderer himself, who throws some loose pennies at Robin, and hits Batman in the head with a roll of pennies.  And manages to knock both of them out cold by doing this.

Later, Batman and Robin awake to find themselves tied up, and with their utility belts removed, in a room that is filling up with carbon monoxide.  But Batman uses his MacGyver-like skills to rig together a battery (using two pennies -- oh, the irony!) and put an S.O.S. signal over the phone wires, allowing the police to show up and rescue them.
After escaping from the Penny Plunderer's death trap, Batman and Robin foil the Plunderer's latest penny crime.  This gets Coyne really frustrated, so he comes up with a plan to get rid of Batman and Robin once and for all.  His plan is to get Batman and Robin to chase him into a warehouse, where he will barricade himself inside, and then call up his gang on the telephone, who will then go to the warehouse themselves.  He tells his gang:


"I'll trick Batman into close quarters... then I'll call you!  I'll stall him till you guys come and we'll have him bottled up!  Get going... and remember - WAIT FOR MY CALL!"

It's not a plan that really makes any sense.  Then again, he's already defeated Batman and Robin twice just by throwing pennies at them, so I guess we'll give him a pass.  Unfortunately, when he finally "tricks" the Caped Crusaders into the warehouse, this happens:
After being captured, Joe Coyne is sentenced to death, and that's pretty much the last we ever hear from him.
His legacy lives on in the Batcave to the modern day, however, thanks to Batman's souvenir he kept from this case: The Giant Penny.  The Giant Penny went on to become way more famous the the Penny Plunderer.  Eventually "The Penny Plunderers" story was retconned to make Joe Coyne a bank robber who Two-Face crushed to death with the penny, turning the penny into a Two-Face trophy instead.  But don't worry, Coyne, even if the rest of the world forgets, you'll always live on in my heart.

Final Analysis:
Even though he lacks a colorful costume, and he only made one major appearance, with his insane fixation on pennies, and his classic addition to Batman's trophy collection, The Penny Plunderer easily joins the wacky ranks of "Batman's Weirdest Villains."