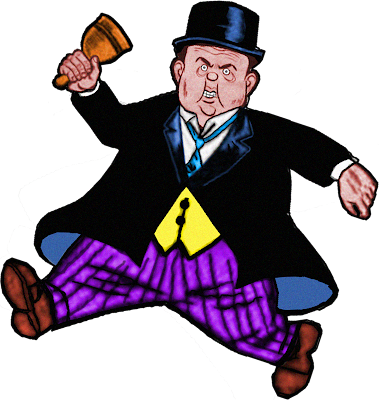 Powers / Skills: The Gong has no special powers or skills, and even though he is a bell-themed villain, he doesn't have any cool bell gimmicks or weapons.  Instead he just carries a regular handgun. He's basically just this short, fat, weirdo criminal.

Weird Obsession:  Ed Peale is obsessed with bells.  Growing up he came to associate bells with submission to authority: The bell on his alarm clock forced him to wake up in the morning, when he would prefer to sleep all day.  The school bell forced him go to school.  The bell on the time clock at his job forced him to start his shift.  Eventually, his obsession with bells drove him insane, and he decided to "rebel" against bells by becoming a criminal and forcing bells to "obey" him.

First Appearance: "The Bandit of the Bells" in Batman #55

History:
Following his mental breakdown, Ed Peale decided to become a criminal in order to achieve mastery over bells.  It doesn't really make any sense, but the dude is clearly insane, so I guess "logic" doesn't need to figure in to it.  Peale read every book about bells he could find, and then named himself "The Gong," put together a gang, and embarked on a wave of crime.
After committing a variety of bell-themed crimes, The Gong and his gang eventually came face to face with Batman and Robin.  The gang promptly beat up the crime fighters, and then set them adrift in the ocean on a bell buoy to await their death by drowning.

Unfortunately for The Gong, Batman outsmarts him, by signalling a passing boat. 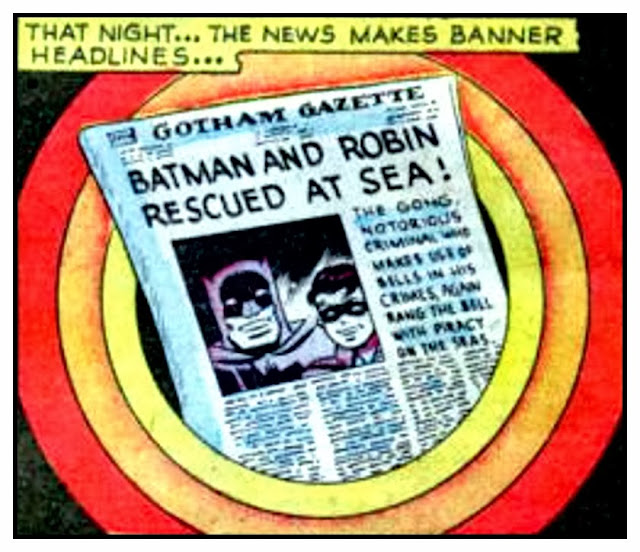 Batman and Robin next track down The Gong just as he is trying to steal a gold and jewel encrusted bell from a small town.  The Caped Crusaders try and stop him, but The Gong smacks Batman with the large bell, knocking him down, then shoots the tires on the Batmobile as he escapes.

At this point in the comic, The Gong has committed at least 5 bell-related crimes, and succeeded at every one.  He has also defeated Batman and Robin in combat twice.  And this is a guy with no real powers or skills at all.  He's just really in to bells, and carries a gun.  It's like Batman and Robin have trained so much to defeat impressive, master criminals, that they don't know what to do when faced with such a massive schmuck.

Batman and Robin next attempt to hunt down The Gong a third time.  This time Robin flies the Batplane around town, blasting a recording of the stolen bell on the Batplane's stereo.  Meanwhile Batman drives around in the Batmobile, with some kind of sound receiver doodad that listens to the sounds from the Batplane as they bounce off objects in the town.  Eventually, they find a matching set of vibrations, and track The Gong and his gang to an abandoned repair shop.

This time, they don't go in alone, however, and bring the police along as back-up.  And the funny thing is, this gang has defeated Batman and Robin twice so far, but when they see the police, they all panic and surrender, without even trying to put up a fight.  That must have been really embarrassing for the Dynamic Duo.
Batman tries to feel useful again by interrogating The Gong before he is hauled away by the police.  But this backfires on him, by allowing The Gonger to work himself up into an inane frenzied monologue, ranting about his hatred of bells... 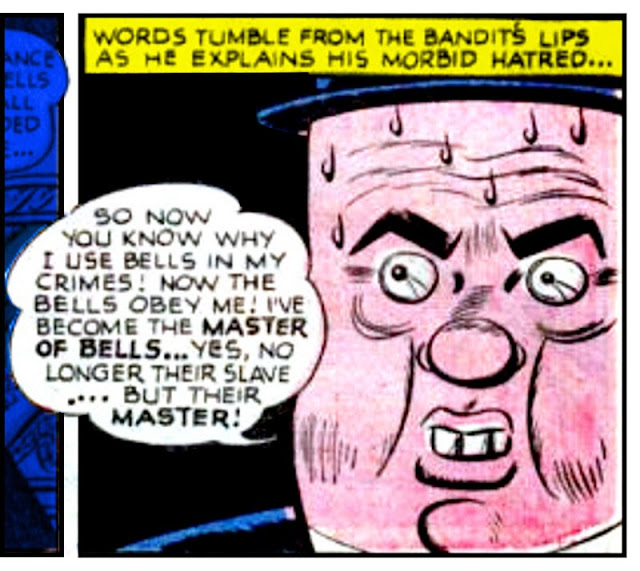 Having reached a fever pitch of insanity, The Gong then leaps through the glass of second story window, and onto the street below.  From the street, the police chase him in to an alley.  Trapped in the alley The Gong barricades himself behind some trash cans, and the cops and the criminal exchange gunfire.

At this point, the Batman switches tactics.  Apparently realizing that his traditional method of bringing criminals to justice (i.e., punching them in the face) don't seem to work against The Gong, Batman instead starts loudly ringing a bell, over and over again.  And the sound is so annoying, that The Gong surrenders, just so he doesn't have to listen to it anymore.  At least in prison, The Gong won't have to listen to bells anymore... 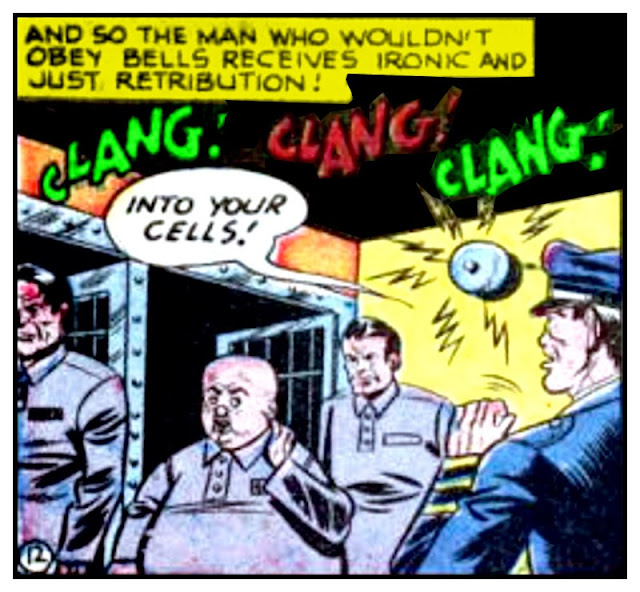 Final Analysis:
Ed Peale did not have a colorful costume, or interesting weapons, and in fact had no particular talents or skills of any kind, yet he he defeated Batman and Robin with little or no effort on several occasions.  Couple that with his insane and nonsensical obsession with bells, and The Gong easily joins the wacky ranks of "Batman's Weirdest Villains."