Try as you might, Christmas music is unavoidable in the last three months of the year.  On the radio, in the grocery store, in TV commercials, practically every where you go, you are bombarded with syrupy sweet renditions of Jingle Bells, Silent Night, and their ilk.  Even if you are a fan of Christmas music, there are only so many times you can hear those same songs over and over again before they drive you nuts.

So it's time to get revenge with a batch of Christmas songs that are creepy, weird, perverse, violent, and just plain wrong.  Play these songs at your family get-togethers, church socials, and office Christmas parties, and your friends, families and co-workers will think you are a holiday-hating, Satan-worshipping, closeted serial killer.

10. Kay Martin & Her Body Guards - Hang Your Balls on the Christmas Tree 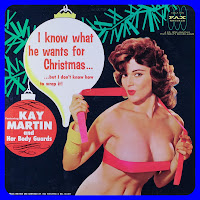 What better way to celebrate Christmas than with a very thinly veiled sex joke comparing Christmas ornaments to testicles?  Kay Martin & Her Body Guards had a risque nightclub act in the 1950s and '60s, and put out several albums, including a Christmas album, "I Know What He Wants For Christmas... but I don't know how to wrap it!"  All of the songs on this album feature raunchy (for the time), Christmas-themed sexual humor, but "Hang Your Balls on the Christmas Tree" is probably the creepiest, as it brings the whole family, including Grandma and the kiddies along for the ride.

Sample lyrics:
"Daddy had a big long thing, tied up with a purple string.  A baseball bat, that I could see, but he hung my balls on the Christmas tree."

9. John Kassir (as The Cryptkeeper) - Deck the Hall with Parts of Charlie 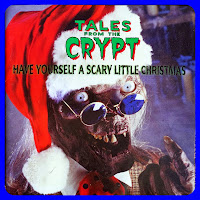 In 1994, the Tales From the Crypt TV show released  "Have Yourself a Scary Little Christmas," an album of horror-themed Christmas songs performed by John Kassir, the voice of The Cryptkeeper.  The entire album is a creepy classic.  In "Deck the Hall with Parts of Charlie," the classic song Deck the Halls has its "boughs of holly" replaced by a gleeful array of severed body parts.


8. Kip Addotta - I Saw Daddy Kissing Santa Claus
The song "I Saw Mommy Kissing Santa Claus" is a bit creepy as it is, featuring a peeping tom child spying on a mom who is cheating on her husband with old Saint Nick.  Kip Adotta's version adds additional frisson by swapping the genders, which adds a homosexual angle, and writing new lyrics that add fondling and undressing alongside the tickling and kissing.

Sample lyrics:
"Then I saw Daddy fondle Santa Claus, and on his ear he nibbled now and then.  I crawled across the floor, I hid behind the door, I left it open just a crack so I could see some more." 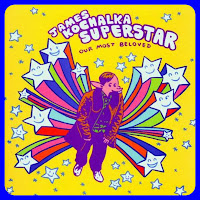 James Kochalka may be best known as the Cartoonist Laureate of Vermont, and author of "American Elf" and "Superfuckers," but he is also a bitchin' rock star, and has released nine albums with his band James Kochalka Superstar.  "Sleighride To Heck" comes from their 2005 Rykodisc best-of album, "Our Most Beloved."

Sample lyrics:
"Their dreams are filled with toys, but they are out of luck.  'Cause Satan's taking Santa on a sleighride to fuck!"


6. The Moog Machine - Carol of the Bells 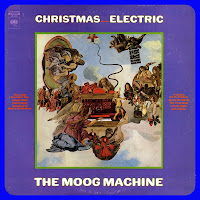 The rest of the songs on this list are novelty songs that are intentionally funny or creepy, but "Carol of the Bells" is a traditional Christmas song, and it is scary as fuck.  When I hear it, I don't think of a celebration of the Virgin Birth so much as the background music you would hear while a group of black-robed cultists sacrificed a virgin to Satan.  Just about any version of this song would do, but I picked The Moog Machine's version because it's all-synthesizer sound seems straight out of a Dario Argento flick.

5. The Sonics - The Village Idiot 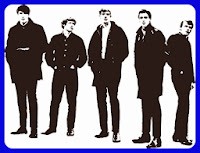 Christmas is a time of warmth, togetherness, and according to legendary garage rock band The Sonics, making fun of disabled people.  In "The Village Idiot," The Sonics recruit "village idiot" Harvey to sing Jingle Bells for them, with politically incorrect results.

Sample lyrics:
"Hey, why don't we get that village idiot in here?  Where is he?  He's a homely looking guy."


4. Weird Al Yankovic - The Night Santa Went Crazy
In "The Night Santa Went Crazy" Weird Al chronicles what happens when Santa finally snaps and goes on a killing spree.  It's full of graphic, violent details, and the song also comes in an "extra gory version" that is even worse.  This is a great song to play for the kiddies if you are looking to warp their young minds.

Sample lyrics:
"And he smiled as he said with a twinkle in his eye, 'Merry Christmas to all, now you're all gonna die!' "


3. Reverend Glen Armstrong - Even Squeaky Fromme Loves Christmas
Peanut and Butter and Chocolate are two great tastes that go great together.  Christmas and the Manson family?  Not so much.  This is a weird one, in that it's hard to tell if Armstrong is serious or not.  Either way it's a hoot.

Sample lyrics:
"When Jesus died for Man's sins, he even died for Manson's.  But please don't think I'm trying to turn your feelings toward this murderer.  There's a girl in a cell who knew the killer too well.  And even though she's bound for hell, her tiny voice sings Jingle Bells."


2. The Arrogant Worms - Santa's Gonna Kick Your Ass
I don't really know much about these guys.  Apparently they're Canadian or something.  But in 1997 the released the album "Christmas Turkey," which is right up there with the Tales From the Crypt Christmas album as one of the all-time classics.  It was tough trying to pick just one song from this album to feature on this list, but eventually I settled on "Santa's Gonna Kick Your Ass" because it is so aggressively offensive and funny.


1. Tiny Tim - Santa Claus Has Got the AIDS This Year 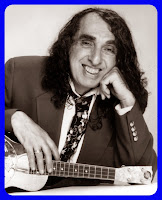 This is a good one to play if you want to make little kids cry.  Tiny Tim was a Grade-A weirdo, but this is messed up, even for him.

Posted by Joshua Raymond at 4:58 AM