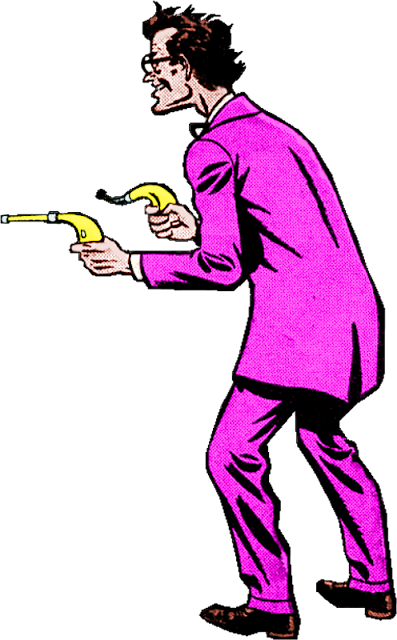 Powers / Skills: The Pied Piper is a chemist and inventor.  He creates poisons, sleeping gasses, explosives, and smoke bombs in his lab, and then rigs them up to be used in all manner of pipes, including tobacco pipes, exhaust pipes, bagpipes, etc...

Weird Obsession:  The Pied Piper is obsessed with pipes.  All kinds of pipes... plumbing, smoking, whatever, as long as it has the word "pipe" in it.  He commits crimes using various pipes, and often targets people or places that have pipe-related names or themes.  Being obsessed with a particular type of pipe might make a little bit of sense, I guess, but all kinds of pipes?  I don't know, it seems a bit random.  It would be nice if we had an origin story that explained where his obsession came from, but nope, we don't.  My guess:  he saw René Magritte's "The Treachery of Images" in an art gallery, and it just blew his mind.

First Appearance: "The Pied Piper of Peril!" in Detective Comics #143

History:
In "The Pied Piper of Peril," we are introduced to the Pied Piper, who has just opened up a new store, "Ye Olde Pipe Shoppe," in Gotham City.  It's a weird store that sells all kinds of pipes: plumbing, flutes, smoking pipes, whatever you can think of.  You know, just like they used to do in ye olden days.  But, we learn the store is merely a front for the Piper's true vocation: CRIME!  Hidden in the shop is a secret laboratory, where the Piper creates his crime pipes!

The next day, the Pied Piper and his gang rob the Farmer's Bank, using smoke-bomb rigged corn-cob pipes, just like the kind farmers (and Popeye) like to smoke.  Batman and Commissioner Gordon get together, and they both agree that this robbery heralds the "return" of the Pied Piper, which is kind of odd, as this comic is his first (and only) appearance.  I guess with so many villains obsessed with random objects, they all must blend together after awhile.  Whether they are obsessed with polka-dots, rainbows, pennies, cameras, pipes, or whatever, Batman doesn't really care, as long as he gets to punch them in the face.

On a hunch, Batman and Robin decide to pay a visit to that odd new pipe shop that just opened up in town.  Unfortunately, while they both come away from the shop convinced that the owner is some kind of weirdo, there is nothing there to prove any connection to the Pied Piper's pipe crimes.

The Pied Piper then goes on to commit a further series of pipe-related crimes.  Batman and Robin get frustrated with not being able to catch him, so they basically say, "screw it," and illegally break in to Ye Olde Pipe Shoppe after dark to search for clues.  Luckily there weren't any duly deputized officers of the law around to see them... oh wait.  Anyhoo, the Caped Crusaders find a clue to the Piper's next crime, and this time are able to catch him in the act. 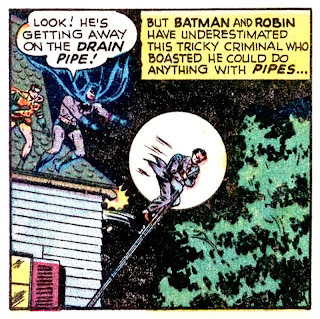 However, the Piper proves to be too slippery for the duo.  First he slides down a drain pipe, then he ducks into a sewer pipe, where he slows Batman and Robin down by blowing poison darts at them from a blow pipe.  From there, he travels to an abandoned amusement park (Gotham City is full of those things), where he knocks over Robin using a roller coaster car he quickly built himself using some "reinforcing" pipes that were on the coaster.  Finally he just straight up clocks Batman in the head with a lead pipe that he was conveniently laying around on the ground.  Basically, the moral to this story is that Batman and Robin are helpless around this guy if he has any kind of pipe within his reach.  He is the MASTER OF ALL PIPES.


The next day, Bruce Wayne and Dick Grayson are sitting around at home, brooding over their defeat by the Pied Piper, when a radio bulletin comes on announcing that tomorrow will be the debut of THE WORLD'S LARGEST PIPE ORGAN at the Gotham City civic center.  You gotta hand it to the people of Gotham City.  When super criminals commit crime waves, do they hide in fear?  No!  In fact, it's almost like they double-down on the risk-taking, and dare the criminals to make a move.  Is Mr. Camera committing a spree of camera-related crimes?  According to Gotham, that's the perfect time to throw a photography convention! The Joker just broke out of Arkham?  Let's throw a "Joker's Wild" poker tournament in that old abandoned toy factory!  The Pied Piper is robbing anything even remotely related to "pipes?"  Let's build the world's largest pipe organ!  What could possibly go wrong?

Naturally, the Pied Piper and his gang show up for the debut.  There plan is to rig the pipe organ up to emit sleeping gas, and then rob the cash and jewels off of everyone in the audience.  But Batman and robin are waiting for them.  They prevent them from using the sleeping gas, and then get into a big, awesome fist fight with them on the oversized keys of the giant organ.

The Piper escapes again, but this time Batman and Robin track him down to an old coal mine.  Inside the mine shaft, the Piper pulls out an exploding pipe from his pocket, and threatens to suicide bomb himself if they don't let him go.  But, as he says this, he accidentally back up into an old stovepipe, and then inhales the soot into his windpipe, causing him to choke, and allowing him to be captured.  You see, in the end, pipes were his undoing.  It's ironic.

Final Analysis:
The splash page of this comic described the Pied Piper like this:


"In their long careers as crime-smashers, Batman and Robin have clashed with a host of crafty desperadoes.  Time alone will tell which one of these master menaces proves to be the Dynamic Duo's most formidable foe, but high on any list of such candidates would undoubtedly appear the infamous name of the criminal who from within his unique world of pipes reached out to terrify the whole of Gotham City - that bizarre creature known as..."The Pied Piper of Peril!"


With a build-up like that, how could the Pied Piper not join the wacky ranks of "Batman's Weirdest Villains?"


AC/DC - It’s a Long Way to the Top (If You Wanna Rock ’n’ Roll)
Possibly the only time that BAGPIPES were ever cool.  Plus, oh my god, look how young Angus looks in that video!  Bon Scott, R.I.P.

Posted by Joshua Raymond at 1:45 AM