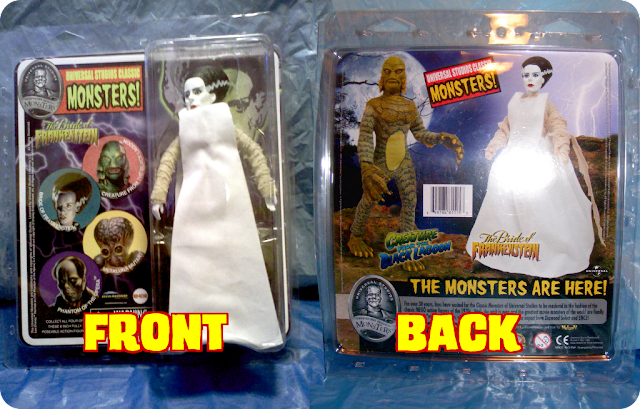 Starting in 2010, Diamond Select began releasing a series of 8 inch Mego-style dolls based on the Universal Monsters.  Imagine what Mego's Mad Monsters would be like if Mego had actually gotten the license from Universal instead of making knock-off monsters, and throw in more modern looking head sculpts and costumes as well, and you'll have an idea what these are like.  In 2010, they released Frankenstein and the Wolfman, and in 2011 they released Dracula and The Mummy.  The current wave was released in 2012 and consists of The Bride of Frankenstein and the Creature from the Black Lagoon, and The Phantom of the Opera and the Metaluna Mutant are on tap to be released later this year.

I think this line of toys is great.  I played with Mego dolls when I was a little kid, so there's a big nostalgia factor in play for me with toys like this.  Plus, I'm a huge fan of the Universal Monsters, ESPECIALLY of Frankenstein's Monster and the Bride.  So I was really looking forward to getting this Bride of Frankenstein figure.  Unfortunately, she turned out to be my least favorite in the line so far.  Read on to find out why...
https://misfitdaydream.blogspot.com/2013/01/diamond-selects-universal-monsters.html
Posted by Joshua Raymond at 6:00 AM