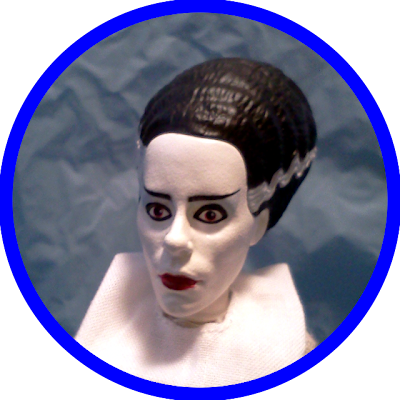 Starting in 2010, Diamond Select began releasing a series of 8 inch Mego-style dolls based on the Universal Monsters.  Imagine what Mego's Mad Monsters would be like if Mego had actually gotten the license from Universal instead of making knock-off monsters, and throw in more modern looking head sculpts and costumes as well, and you'll have an idea what these are like.  In 2010, they released Frankenstein and the Wolfman, and in 2011 they released Dracula and The Mummy.  The current wave was released in 2012 and consists of The Bride of Frankenstein and the Creature from the Black Lagoon, and The Phantom of the Opera and the Metaluna Mutant are on tap to be released later this year.
I think this line of toys is great.  I played with Mego dolls when I was a little kid, so there's a big nostalgia factor in play for me with toys like this.  Plus, I'm a huge fan of the Universal Monsters, ESPECIALLY of Frankenstein's Monster and the Bride.  So I was really looking forward to getting this Bride of Frankenstein figure.  Unfortunately, she turned out to be my least favorite in the line so far.  Read on to find out why.

The Bride comes packaged in a plastic clamshell.  The backing card has retro Mego-style art, featuring a bunch of heads in circles, like on Mego's Star Trek and World's Greatest Super Heroes toy lines.  The back of the card has a photo of the Bride along with the Creature from the Black Lagoon, who was released at the same time.
The clamshell is designed so that if you cut it open along the edges, it is recloseable, so you can take the figure out, and then put it back in the clamshell to store or display it when you are done.  Once the clamshell was cut open, the figure comes out easily.  I'm not a big fan of clamshells because they are hard to open, but if you are going to use one, this is probably the best way to do it.

This is the first area of real disappointment for me, because the face looks nothing like Elsa Lanchester, the actress who played the Bride.  It's not clear to me if they tried to capture the face, and just failed, or maybe it was some kind of production issue, like the faces didn't come out of the molds right?
Or, maybe they didn't have her likeness rights?  I know that Dracula figures rarely look like Bela Lugosi because his estate is very picky about who they will license his likeness too, but I've never known that to be the case with Elsa Lanchester.  I have several Bride of Frankenstein action figures from Sideshow Toys and Diamond Select, and they all have her likeness.

If they didn't have her likeness, they would have been better off going with a generic "pretty girl" doll head.  It still would have been recognizable as the Bride with her hair and makeup.  Instead they went with a unique, but really homely sculpt, she has sort of a "horse face."

Whatever the reason, it's a very bad thing.  The Bride was strange, and scarred, but still eerily beautiful.  This figure is not.

Aside from that, the figure looks fine.  Her paint job and dress are kind of plain and simple, but that may be intentional to help give it a somewhat primitive retro feel.

This doll has all the standard pints of articulation you would expect on a Mego figure, but they don't work very well.  Every time I would move her arms or legs, they tend to fall part of the way back towards their original position.  In order to pose her, I would have to move her arms about twice as far as I wanted them to go, so that when they flopped back, they would end up being where I wanted them.   It's not clear to me if this is due to the body's construction, or if the movement was being restricted by her costume.

The doll is incapable of standing on it's own, no matter how you position it.  I had to use a Kaiser doll stand to stand it up in all of my photos.

For the purposes of this review, I'm going to consider her costume to be an "accessory."

This doll's gown is very plain and "tent-like," and doesn't really do justice to the more drape-like folds of the dress in the film.  I wasn't very impressed with it, but, to be fair, it may have been made this way on purpose, to make it feel more like something Mego would have done in the 1970s.  Her dress is fairly easy to remove if you wish to, the hardest part is getting her arms to point up so you can pull it off, as they keep trying to move back down.

The bandages on her arm look much better.  They achieved this look by actually wrapping them in shredded cloth.  I'm sure if Mego made this they just would have given her a cloth sleeve with a bandage pattern printed on it.  The bandages on the rest of her body are just suggested at with a wrinkly cloth bodysuit, but it still looks fine, and it's covered by the dress anyway, so normally you wouldn't even see it.

One problem with the bandages comes in to play if you want to remove her bodysuit.  You would first have to unwrap all the bandages before you could take it off, and then you would have to rewrap the bandages after you put it back on.  I wanted to remove her bodysuit so I could see if the problems I had posing her were due to her body's construction, or due to her outfit constricting her movement.  But I wasn't confident I would be able to put her bandages back on properly after I was done, so I decided against it. 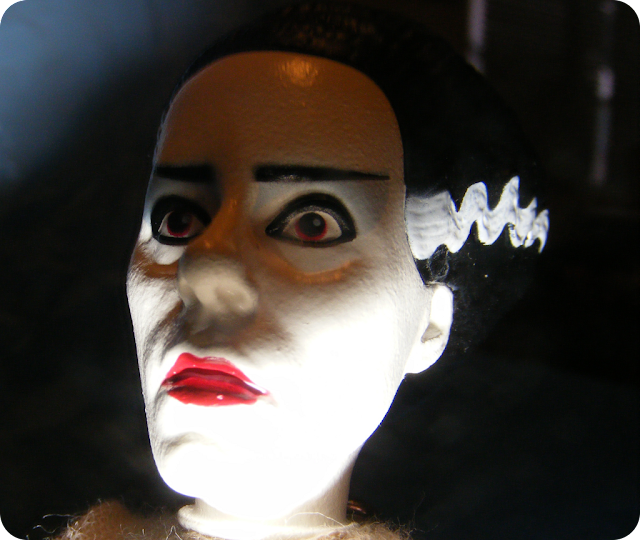 This has been a fairly negative review, and I honestly feel kind of bad writing it.  Despite my disappointment with this figure, I still think it's great that Diamond Select is making Mego-style toys in the 21st century, and I'm still looking forward to seeing what they come up with in the future.  Also, I really love the Bride of Frankenstein, and I'm always happy to see a new toy of her.  So I'm still giving this a positive "cool factor" rating. 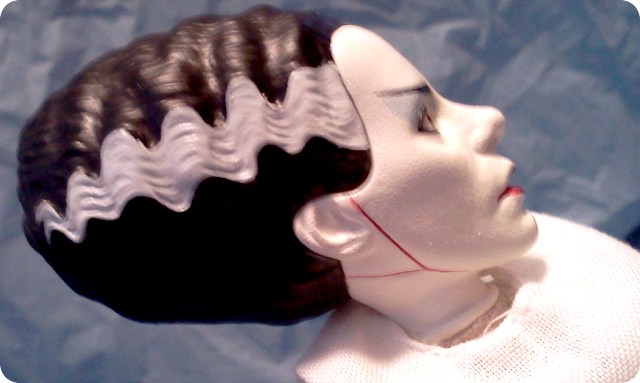 I paid $22.99 (with free shipping) for this figure from Toys R Us's website, and I don't think it was worth that much.  I think I let my excitement over getting a new Mego-style Bride of Frankenstein get the better of me.