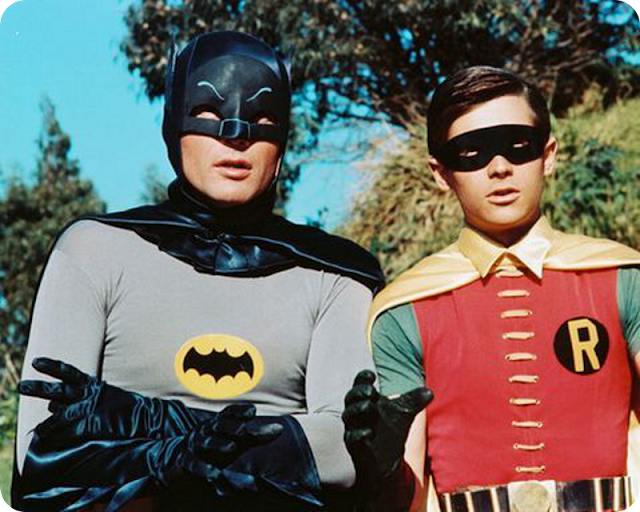 They've already announced a line of 6 inch "Movie Masters" figures from Mattel, which I am SUPER excited about.  I've been dreaming about Batman 1966 action figures since I was four years old!  I fully expect to buy every figure from this line, even though I haven't seen any of them yet (please don't dissapoint me, Mattel!)

Hot Toys has also announced they have a license to produce Batman 1966 merchandise.  So far they've shown a giant size Batmobile.  I assume they will be making a hyper-realistic Adam West figure, and possibly other characters from the series as well, but they haven't officially announces that yet, as far as I know.  I would love to have a Hot Toys Adam West, although Hot Toys figures are really pricey, and I don't know that I will be able to afford the 200+ dollars for one.

Today I learned of some other Batman 1966 toys coming this year.  Funko have announced on their forum that they will be producing "Wacky Wobblers" and "Funko Pop" toys based on the series.  The characters will be:
They actually posted this a couple of weeks ago, but I'm not a regular reader of their forum, so I just heard about it today.  Here's the links if you want to check it out for yourself (there's no pictures yet, though):
The Wacky Wobbler List of 2013!
2013 Pop! Wanna Know? 12 Days of Christmas

I'm going to be keeping my eyes peeled for more info about these, and other Batman 1966 toys, and if I find any, I'll be posting about that as well.


UPDATE, Tuesday, February 12: I've got some preview illustrations of these toys in a new post, click on the link to check them out!

Posted by Joshua Raymond at 4:28 PM