Mr. T T-Shirt, you will be missed. 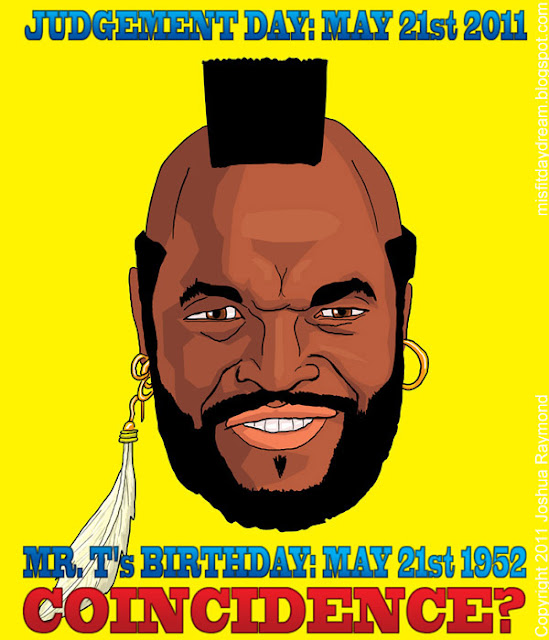 So, I "designed" this T-Shirt in 2011 when that Reverend Harold Camping (I think that was his name... too lazy to Google it right now) guy was predicting Judgment Day or the Rapture or whatever.  Basically I just took a drawing of Mr. T that I made, and slapped some text on it.  I wasn't sure if Zazzle.com (where I do my t-shirts at) would accept it or not, since it had an image of a celebrity on it.  But they did, and I sold a few t-shirts.  Weirdly, even after May 21st, 2011, people still bought this, the last one was a few weeks ago (right before that Mayan Apocalypse thing, now that I think about it.  Coincidence?).  Not that I sold a lot, maybe like 5 of them?  Anyhoo.... Zazzle just decided today that it infringed on their content policy and pulled it from their site.  So, if you haven't bought one yet, or where holding out for the next apocalypse, you're out of luck.

I've been planning on starting to collect Mr. T toys in 2013.  Actually I all ready have a couple... here's a blurry pic:
I've had these toys since the 1980s.  Recently Neca has come out with an awesome new "Clubber Lang" action figure as part of their Rocky line:

I really want to get one of those Clubbers, they look amazing!  After that I think I might want to start tracking down other Mr. T and A-Team toys.   I think Mr. T is a worthy character to add to my toy collection, along with the Batman and Frankenstein toys I collect right now.
Posted by Joshua Raymond at 12:50 AM