"I Won a Funko Pop Batman!"

Join me as I write about a cool Batman toy I won in a contest online, as well as expose the dark secret that cereal pusher Cap'n Crunch would prefer to leave buried in the sands of time...

A couple of weeks ago, I entered a contest on Poe Ghostal's Points of Articulation to win a Funko Pop! Dark Knight Rises Batman from Superheroden.com.  I didn't really expect to win, because I NEVER win cool contests like that.  Actually, I take that back, there was one contest I won, when I was a little kid...


As a boy, I once won a contest from Cap'n Crunch cereal!  The prize was a TREASURE CHEST full of 100 games!  The picture showed a giant wooden treasure chest full of board games.  I was so excited!  I mailed off my winning prize pieces to Quaker Oats, and then waited, and waited... then one day, a manila envelope arrived at my home from the Quaker Oat Man himself.  I opened it up, expecting it to be info about my treasure chest of games...

And it wasn't info about the chest, it was the chest itself.  A "treasure chest" made of cardboard that I had to fold and assemble myself.  And then there were a few more pieces of printed cardboard, which were my 100 games.  For instance, there was a cardboard checker board, and instructions on about 30 different "games" you could play on a checker board.  They didn't even include the checkers, you had to provide those yourself.  Then there was a tic-tac-toe diagram, and instructions on about a dozen games you could play with tic-tac-toe.  There were three or four other generic games in there, with instructions for variations on the play of those to round it up to 100 games.  100 games, and a treasure chest, and it all arrived inside a plain manila envelope.

Needless to say, little-kid-version-of-me was crushed.  Why, If I couldn't trust Cap'n Crunch, who could I trust?  It's probably the reason I grew up to be a long haired weirdo with an anti-authoritarian streak.

So, anyhoo,  I saw Poe Ghostal's contest online, and it looked like fun.  I didn't really expect to win, but I entered anyway, and I was looking forward to reading the "Bat Libs" from the other participants.  Even when I saw there were only, like, 13 entries... meaning my odds were pretty good, I didn't expect to actually win.  Then, a week later, Poe announced the winner, and it was me!  Woo-hoo!  Last Saturday it arrived in the mail, in a cardboard box, NOT a manila envelope.  Yes!

So, let's take a look at this thing:

The packaging is great.  It has a simple bold design with white borders that remind me of comic book panels.  Just like the Funko Beavis and Butt-Head toys that I reviewed a couple of weeks ago, the box is not sealed with tape, and it is designed so that the toy can be easily removed from the box, and can be placed back in it when you are done.  I really like that feature, and I wish more companies would do that.  Normally toy collectors have to decide whether they are going to leave the toy in the package to preserve it's collectability, or take it out to play with it.  With these toys from Funko you can do both.

The figure itself is a lot of fun.  It doesn't really have any articulation, except for it's head, but it doesn't need any.  It's not designed to drive around in a car, or hold a weapon... all it has to do is sit on your desk and look cute.  I don't normally collect modern Dark Knight toys.  I grew up with Adam West and the Super-Friends, and I tend to collect the more colorful Batman toys, but the "cute factor" of this toy is enough to overcome the darkness of the movies he's based on, and I think he'll fit in quite nicely with my other Batman collectibles.


Note:  I'm not dissing the Nolan movies, I think they're great.  I'm just not into collecting stuff from them.  I tend to collect stuff that reminds me of when I was a kid. 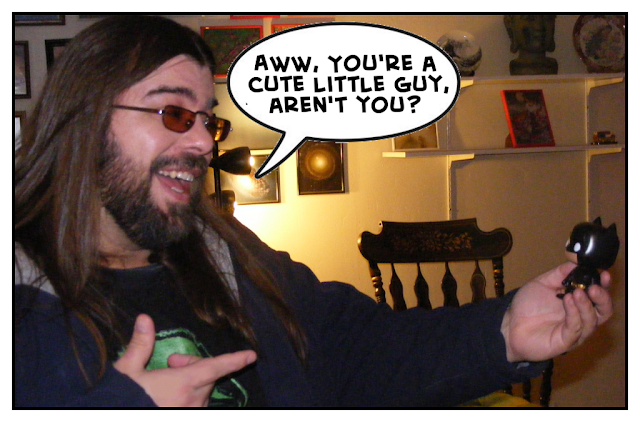 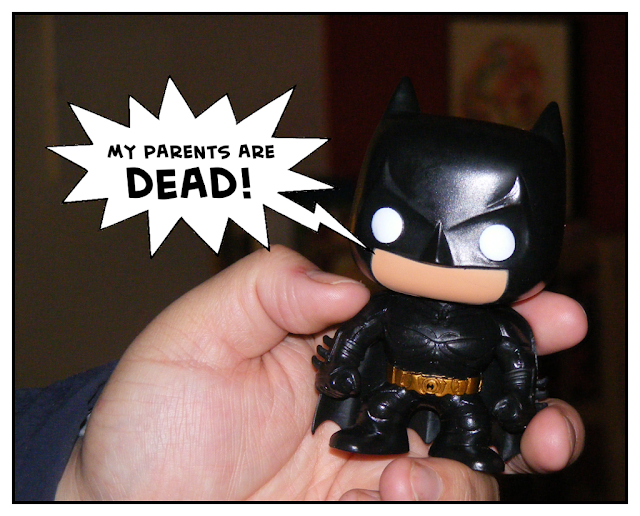 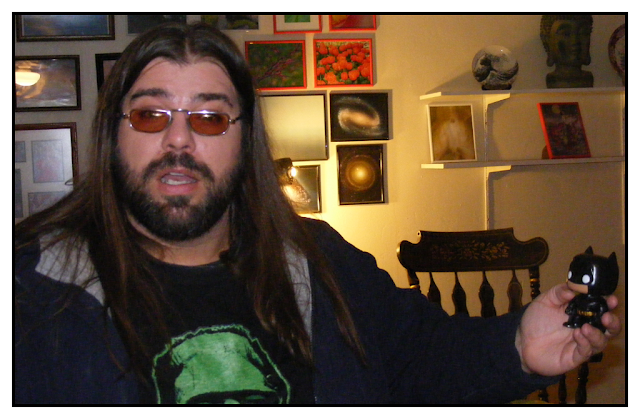 Thank you to Poe Ghostal's Points of Articulation and Superheroden.com for giving me this great toy!
Posted by Joshua Raymond at 12:00 AM