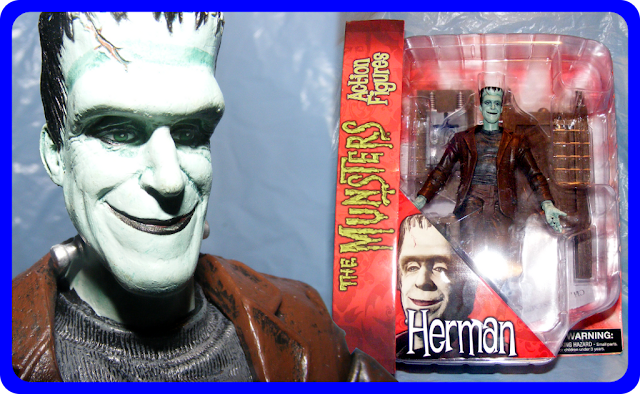 I'm a huge Frankenstein fan, from the original book by Mary Shelley, to the Boris Karloff movies, and his various incarnations in comic books, cartoons, TV, and movies since then.  Frankenstein's Monster has come in many forms over the years, but this guy may be one of the goofiest: Herman Munster from "The Munsters" TV series.  How does this gruesome but loveable Sitcom Dad / Reanimated Corpse rate as an action figure?  Read on to find out...

The packaging on this toy is adequate.  Nothing to get very excited about, or upset about.  It's a big plastic box with some cardboard attached to it, designed so that you can see as much of the contents as possible.  The clamshell opened up with a boxcutter, and the figure was not difficult to remove from the package.

It has a big photo of Herman on the side of the box.  The other characters in this series have similar photos on the side of their boxes.  I've read that it is designed that way so you can display it on a bookshelf with the photo facing out.  This seems like an odd way to display an action figure, since you wouldn't see the actual figure, but if some people like that, I guess there's no harm in it.

I did like the brief bio of Herman written on the back:


"Weighing 350 pounds and measuring 7 feet 3 inches tall, Herman Munster was built in 1850 by the famous Dr. Victor Frankenstein.  A good-natured, soft-spoken funeral home employee, Herman is a World War II veteran, a good husband to his wife Lily and a loving father to his son Eddie."

The sculpt on this toy is fantastic, they've really nailed the look of actor Fred Gwynne as Herman Munster.  The paint job on the figure is great, too, I can't find any flaws with it.  He's got some extremely unsubtle shading painted on his forehead, and normally I wouldn't like that, but here it seems like an attempt to replicate the look of the make-up job from the TV show, so it works for this figure.

This toy has a good amount of articulation.  It is is BIG step up from Diamond Select's Universal Monster figures, which are more like plastic statues.  This figure has hinges at the elbows, wrists, knees, and ankles, cut joints at the thighs, wrists, elbows, waist, and upper arms, and ball joints at the hips, shoulders, and head.  The figure can be posed in a variety of ways, such as standing, sitting, walking, and gesturing.  It comes with a base to stand on, but the figure is fairly well balanced and can stand on it's own with out it.

This figure comes with a few accessories.  First, there is a base to stand the figure on.  The figure stands pretty well on it's own, though, and the base doesn't really feel like it anchors to his feet very well, so I don't know that it is really useful.

The second accessory is a lunch pail, like the one Lily used to hand Herman in the opening credits of the TV show.  It's fine.  He can hold it in his hand reasonably well.  I'm not really sure if anyone was really clamoring for a lunch pail prop for Herman to hold, though.  Then again, I don't know of any other item I would have preferred him to have.  I guess I don't really think of Herman Munster and automatically picture any accessories for him.

The third thing he comes with are pieces of an electric chair that can be assembled for Herman to sit in.  Other pieces come with the Lily and Grandpa figures.  I imagine that this will be a really great prop to play with once I assemble it.  I do have the Lily and Grandpa figures waiting for me to open, so keep your eyes on this blog in the coming weeks to see how it turns out.

I'm really digging this Herman Munster figure.  Yeah the TV show was kind of corny.   The Addams Family was way cooler, those guys actually seemed kind of gleefully perverse, while The Munsters was basically just a generic family sitcom in monster drag.  But I still loved the show as a kid.  Plus, while this Herman Munster figure is great on his own, he also fits in very well with my collection of Universal Monsters and Frankenstein toys.

I got this figure as a Christmas gift, so the "value" for me was great, he was free!  Normally, this figure retails for around $21.00.  That seems a little high to me, but not too bad.  Also, I imagine that the price well go up quite a bit once this figure sells out at retail, and is only available at places like eBay.  So, if you're thinking about getting this figure, I'd recommend you pick him up soon.

Note:  Normally, I do "Thrift Store Thursdays" on Thursdays, but I'm way behind schedule on my blog this week.  I haven't had time to assemble and photograph my latest thrift store purchases.  Thirft Store Thursdays should return next week, and hopefully I will get a few posts typed up in advance this weekend, so this won't happen again.  Thanks!  - Joshua Raymond