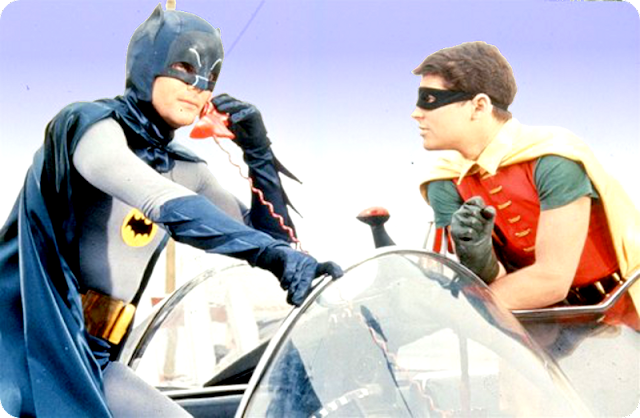 Warner Brothers released more info about their upcoming line of Batman 1966 merchandise today.  Like I mentioned in a previous post, I am super-excited about this, as the 1966 Batman show was a HUGE influence on me as a kid.  I've been waiting almost all of my life for toys from this show.  There are still no pictures of the toys yet, but ToyFair, the annual toy industry trade convention, is coming up in less than two weeks, so I bet some well surface by then.

Highlights of the press release include:

Batman Classic TV Series Is Back On The Scene
Fans of the Batman Classic TV Series will be doing the Batusi when WBCP and its licensing partners give them a first glimpse at the all-new licensing program for the fan-favorite live-action series.  Sure to ensnare the eyes of collectors and ignite the nostalgia for the 60’s series is the Mattel vintage-styled Batman Ken® and Catwoman Barbie® collection, and a BATMAN™ Classic TV Series 6” Figure Assortment, BATMAN™ Classic TV Series TV Moments 2 Pack, as well as a BATMAN™ Classic TV Series Batmobile.  Rubie’s will introduce a line of costumes based on series favorites including Batman, Robin, Catwoman, The Riddler, and The Joker.  Additional licensees supporting the Batman Classic TV Series include Funko with stylized figures and plush; Mezco with colorfully detailed vinyl figures; NECA with an 18-inch action figure; Round 2 with model kits; Cryptozoic Entertainment with trading cards; and a variety of high-end collectibles from Noble Collection, Sideshow Collectibles, TriForce, Kotobukiya, Medicom and Hot Toys.  The Mattel Hot Wheels® brand will rev-up with a high-end Elite Scale Batmobile inspired by the 1966 hot-rod in the series for the true collector; along with many other toy partners who will help bring to life this cultural phenomenon with a Zap! Bam! Pow!


As always, I'll be keeping my eyes peeled for any more Batman 1966 news or photos, and I'll be posting them here in my blog.
Posted by Joshua Raymond at 11:27 AM