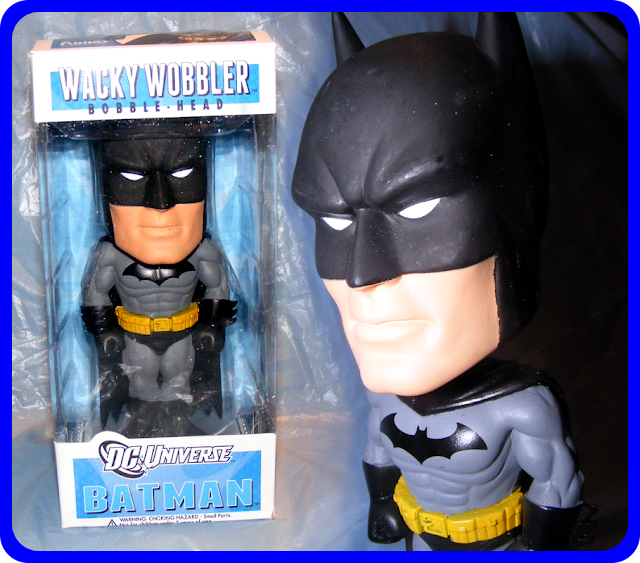 So, a couple of weeks ago, I wrote about a Funko Pop Batman toy I won in a contest from Poe Ghostal's Points of Articulation.  Well, Superhero Den, the folks that provided Poe with the toy to give away, apparently got a kick out of my write-up of it and the photos that I posted.  Well, more likely, they like the free advertising I gave them, LOL.  Anyways, they ended up sending me a SECOND free Batman toy!   How cool is that?  So, I am now in the possession of a Funko DC Universe Batman Wacky Wobbler Bobblehead.  Let's check it out...

Like the other Funko products I've reviewed in the past (here and here), I really like the packaging.  Funko makes packages that are easy to open, and you can put the toy back inside the box like new when you are done.  I like that so much better than packages that need to be cut, or torn, or make you struggle through layers of tape or twist ties.  The graphics on the box are simple, colorful, and fun.

Another thing I've noticed about Funko is their toys always have great looking sculpts, and this toy is no exception.  I especially love Batman's face on this toy.  It has a look of steely determination to it, but it doesn't go over the top into something that is too grim or angry.  I would love to have a Batman action figure with this face.  The body is a blend of a more realistic comic book style, with that of a squat Bobblehead figure, and it is just about perfect for this toy.

One area that Funko sometimes falls short on is their paints, and this one does have some weird marks on the back of the cape, but aside from that it looks great, and I'm not going to spend that much time looking at the back of this toy anyway, so it's not that big of a problem.

There are no accessories to speak of, but with a toy like this you wouldn't really expect any, so that's not a problem.

I don't normaly collect bobbleheads, but I do collect Batman toys.  This isn't something I would have considered buying before, but now that I have it in my hands, I find that I really like it.   Since I've got this, I've found myself looking at more toys like this online, and will probably end up picking up some more.   So, I guess that's pretty cool.

Well, I got this toy for free, so obviously the "value" for me was pretty darn good.  Superhero Den normally sells them for $12.99, and that's seems like a pretty reasonable price for one, to me.  Definitely cheaper than most of the new action figures I usually buy.

Normally, I rate the toys I review on a scale of 1-5 "robots."  But since this toy was provided to me for free, I decided to omit the rating... I don't want anyone thinking I would give a higher rating on something just because I got it for free.  But honestly, it IS a pretty good toy.  If you're interested you can pick one up from Superhero Den at http://www.superheroden.com/batman-bobblehead-p-20537.html

Posted by Joshua Raymond at 1:33 AM