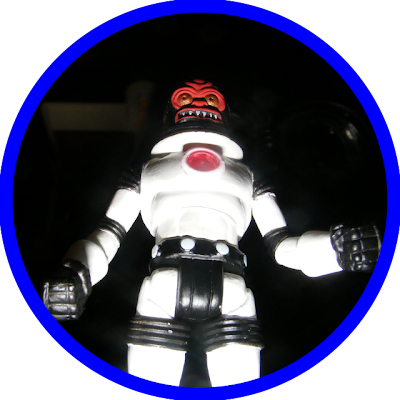 These figures weren't generic knock-off toys, though.  They were great toys in their own right, with colorful and unique designs for all of the aliens.  The toys didn't last very long on the shelves, though.  By the time I was a kid, they were long gone.  But for people who did encounter them as a kid, they made a big impression.  A few years ago, Four Horsemen got the rights to make new versions of these toys.  I've been seeing these online for awhile now, but I wasn't sure if I was interested enough in them to buy the toys.  But, every time I would see a new review, or photo of them online, I would always linger over them, and I finally got around to buying my first set of them last week.  I've got to say, now that I have these toys in my hands, I really love them.  In fact, I think they might be my favorite line of toys currently being made.  I'm definitely going to be picking up the rest of the characters in this line, and probably some of the alternate colored versions as well.  For this review, I'm going to start things off by looking at "Metamorpho" from series 1.

The packaging on this is great.  It consists of a cardboard backer, and a plastic shell, and the shell is designed so you can take it off and put it back on again without having to cut or tear anything.  That means that you can take the toy out of the package to play with or display, and then put it back in the package as good as new when you are done.  I love it when toy companies design their packages this way.

The card art is colorful and fun.  It's inspired by the artwork from the original 1960s Outer Space Men toys and production samples.  The name "Metamorpho" is written in rainbow colored psychedelic type, like something off of a vintage 60s rock poster.  On the back of the card, there is information about the Outer Space Men, a bio of this character, and photos of the other characters from series 1 and series 2 of the Outer Space Men.

I really like the look of the card art and packaging a lot.  I normally display my action figures loose, out-of-the-package, but I'm tempted to display these guys in their packages because they look so cool.

The figure was secured inside the package with a twist tie.  Normally I hate twist ties, but this was only one, and it came out easliy, so I'm not going to mark the score down for it.

The sculpt on this toy is great, especially for the size it is.  I knew when I bought it that it was going to be a 3 3/4 inch figure, but whenever I saw picture online, I found that hard to believe, because they looked so much better than other figures made in that size.

The design is done in a fun, bug-eyed-monster, retro sci-fi style.  I guess it might not have been intended to be "retro," since the figure was originally designed in the 1960s.  It looks like the sort of thing you'd see in a slightly goofy sci-fi movie from the 1950s or 60s.  I grew up devouring those movies on TV, so this look really appeals to me.

The paints on this are very simple and flat, no airbrushing or textures, or anything like that, but those sort of features wouldn't really look right with the simple, retro look of this toy.  What paint there is on the toy is applied well, with no visible flaws.

This is where the toy starts to get very interesting.  It does not have any kind of hinges, or ball joints, or traditional articulation.  Instead, it's made up of individual pieces that can be pulled apart and snapped together using Onell Design's Glyos System.  Each of the points where the pieces are snapped together acts as a cut joint.  So you don't get the full range of motion you would get in something like the modern DC Universe Classic figures, for instance, but you get more than they had in the vintage 3 3/4 Star Wars figures.  Since the arms don't bend, they include two extra arm pieces, so you can choose to use either straight arms, or arms that are bent at the elbow.

But what you lose in articulation, you gain in fun. You can snap the figure apart, and rearrange the pieces however you please, to create new configurations or characters.  And the more of these figures you have, the more fun it gets, as you can swap heads and body parts from one figure to the other for even more combinations.  And you're not limited to just the Outer Space Men, the parts are compatible with any figure that uses the Glyos System, from Onell Design, Four Horsemen, or any other toy company that uses it.   You end up with something that's kind of like Legos, but for action figures.

Another neat feature this figure has is three different faces.  There is a little knob on the top of his helmet, and you can rotate it to change his faces.  One is a purple vampire type, one is a golden reptile dude, and the other is a goofy looking (in the best way) bug eyed monster.

This toy comes with a couple of accessories.  One is a ray gun, and the other is some weird thing with a clear ball in it that he can hold in his hand (I don't know what it's supposed to be -- I'll just call it a "Space Rod" --I guess that's what imagination is for).  One aspect of the weapons that was a little disappointing is that they are NOT Glyos compatible.  I was hoping that I could pop the ray gun in his back as a jet pack, or pop the "space rod" into his neck hole as a weird alternate head, but that doesn't work.  They are still good as regular weapons for Metamorpho to hold, though.

I really like this toy a lot, it reminds me of the goofy, guy-in-a-rubber-suit monsters from all the cheesy sci-fi movies I watched as a kid, and that's awesome.

I paid a total of $62, including shipping, for a set of four Outer Space Men from the Four Horsemen's online store.  That averages out to $15.50 per figure.  That's pretty high for a 3 3/4 inch action figure, but in this case, I don't mind paying it, because I really love this toy.  I'm definitely going to buy the next four regular figures in this line at that price.  I might have to think twice before ordering the more expensive alternate colored versions, though, or the 2012 holiday assortment that only comes with 3 figures for the same price.