50 years ago today...
"Fine Feathered Finks," the third episode of the Batman TV series, premiered on ABC TV, January 19th, 1966.  This episode saw the debut of Burgess Meredith as "The Penguin."  Meredith played The Penguin like a Looney Tunes version of a James Cagney-style gangster, while waddling and squawking like a duck and mugging with extremely exaggerated comic facial expressions.  His portrayal of The Penguin was not as manic as Frank Gorshin's performance as The Riddler, but was equally as distinctive and memorable.

In this episode, The Penguin is released from prison after serving his sentence.  But rather than commit more crimes, he dumbfounds the Batman by instead pulling a series of exploding umbrella pranks.  Each prank seems like a prelude to a robbery, but then no robbery occurs.  Batman is frustrated, because he knows The Penguin is planning a crime, but he has no basis to arrest him.  So he goes undercover as Bruce Wayne, to plant a listening device at the Penguin's umbrella factory.  Thinking that Bruce Wayne is a rival umbrella manufacturer engaged in industrial espionage, The Penguin and his men capture Bruce and tie him up on a conveyor belt leading into a furnace.  The episode ends on a cliffhanger, with Bruce Wayne about to burn in a fiery deathtrap.

Cliffhanger Text: "Oh, the irony of it!  The horror!  The flaming end of the Caped Crusader.  Can Bruce possibly escape??  For Batman's sake!  Keep your bat fingers crossed until tomorrow!  Same time!  Same channel!!" 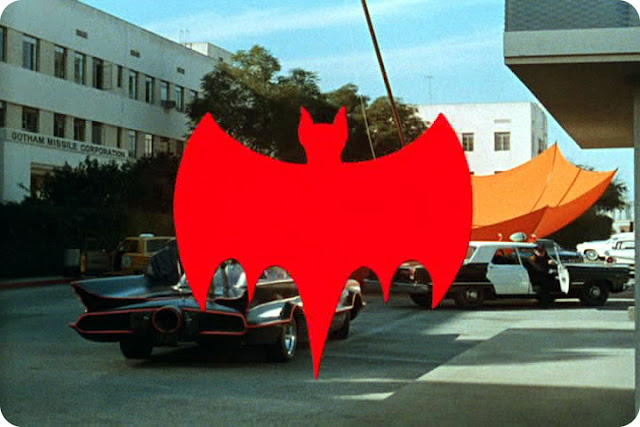 Posted by Joshua Raymond at 1:00 PM