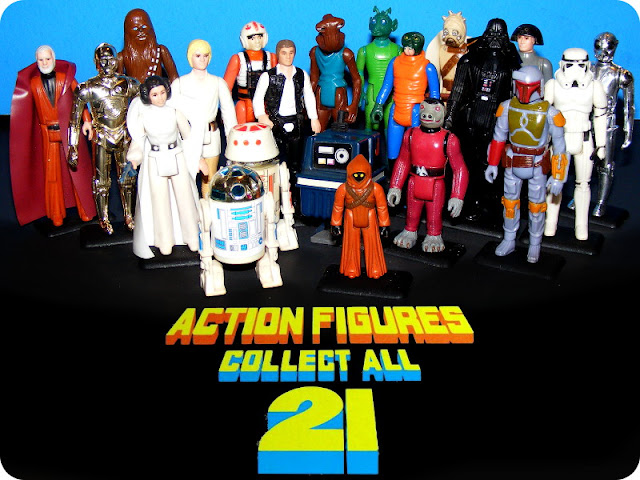 I had a nice collection of Kenner Star Wars figures, vehicles, and playsets when I was a kid, but I gave them all away when I was in Jr. High, and thought I had outgrown them.  But I always missed them as an adult, so a little over a year ago I started buying up the vintage figures all over again, a few figures at a time.  A couple of weeks ago, I finished my collection of the original 21 figures Kenner released under the "Star Wars" banner between 1977 and 1979, before moving on to "The Empire Strikes Back" in 1980.

I had all of these figures when I was a kid except for Princess Leia and Death Squad Commander.  I never really wanted the Death Squad Commander when I was a kid, he just seemed like some generic background guy to me back then.  But I did want a Princess Leia, but nobody ever bought one for me for my birthday or Christmas, maybe thinking that I wouldn't want one because she was a girl.  I did end up getting a figure of Leia in her Empire Strikes Back Hoth outfit a few years later.  But the Leia with her white gown and buns in her hair has always been my favorite, so I'm really happy to have her in my collection now.

Now I have a decision to make:  what do I collect next?  Do I buy all of the 1977-79 playsets and vehicles?  Do I move straight on to the "Empire" action figures?  I definitely want to get the playsets and vehicles, but it might take me a long time to find affordable ones on my budget.  So I don't think I'll buy those right away, instead I'll just keep an eye out, and pick them up whenever I can find them for a good deal.

I think I might do some army building with the 1977-79 figures, and pick up some extra Jawas, Sand People, and Stormtroopers first.  After that I will probably move on to the Empire Strikes Back figures.

Posted by Joshua Raymond at 3:34 PM