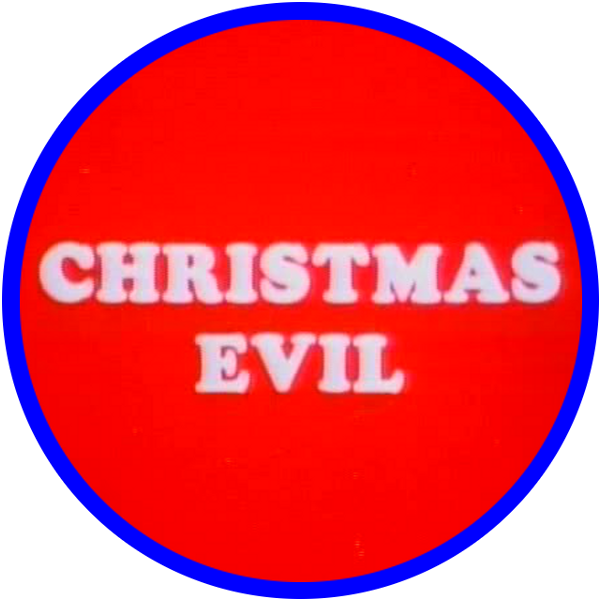 
Christmas Evil (aka You Better Watch Out) (1980) - Movie review plus screencaps:
You remember that old Christmas song, "I Saw Mommy Kissing Santa Claus?"  Well, this movie is basically an unofficial sequel to it.  In the song, a little boy sees his mother kissing Santa Claus, but he is too young to realize it's really his father in a Santa suit.  The film picks up with Harry, the little boy, as a grown man in his forties, a man so scarred by what he saw that Christmas Eve that he is now an emotionally crippled psychotic weirdo!  Important fact: this film is NOT a comedy.
Harry is a grown man in his forties, with no wife or kids, or much in the way of social skills, and a bit of an obsession with Santa Claus.  He wears Santa Claus pajamas, has pictures of Santa Claus all over his his house, and he has a large collection of toys.  He even works at a toy factory.  At first he seems harmless, just a bit eccentric.  Heck, I'm a grown man with no wife or kids who collects toys.  Replace Santa Claus with Batman and Frankenstein, and this guy seems a lot like me.  So at first, I kind of related to the guy.  Then they show him spying on children with binoculars, and writing the details of their lives down in his "Naughty" and  "Nice" books.  Thanks for making feel like a creep, movie.
As the film progresses, Harry begins acting out on his Santa fantasies more and more, and eventually convinces himself that he IS Santa Claus.  He breaks into people's houses, leaving presents for the good boys and girls, sacks of dirt for the bad ones, and KILLING any adults who get in his way.
This film is so strange.  The premise, that a kid would go nuts after seeing his mom make out with Santa Claus, is just SO stupid, but the film takes it totally seriously.  The filmmakers do their best to play Harry as a sympathetic figure, and they chronicle his slow breakdown and descent into madness as realistically as possible, given how nonsensical it is.   This film is also strange because even though it is a violent, gory, slasher flick, it also tries to be a heart-warming Christmas film at the same time.  And the finale of the film just takes it to a whole other level... it takes the story of a psychotic murderer in a Santa Claus suit, and gives it a twist ending straight out of "Miracle on 34th Street!"

The juxtaposition of these two elements, the gory psycho-killings, and the joy and love of the Christmas season, is so weird that it's kind of awesome.  Legendary bad-taste filmmaker John Waters calls Christmas Evil, "the greatest Christmas movie ever made," and I'm inclined to agree.  It's certainly like no other Christmas film you're ever likely to see.  I wholeheartedly recommend this film to anyone looking for something weird to watch for the holidays.
Christmas elements of "Christmas Evil" include:

Posted by Joshua Raymond at 2:07 AM