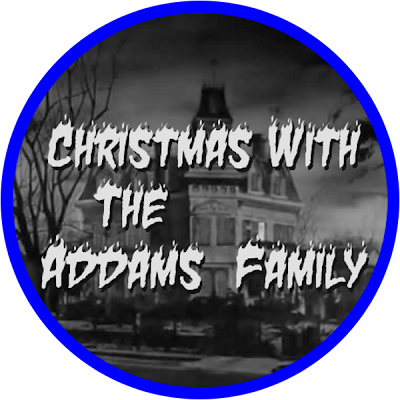 CREEPY CHRISTMAS
Christmas With the Addams Family (1965) - TV review plus screencaps:
"Christmas With the Addams Family" is the Christmas themed episode of The Addams Family.  It originally aired on Christmas Eve, 1965.  In the episode, The Addams Family's neighbor, Mr. Thompson, tells the the Addams children, Wednesday and Pugsley, that there is no Santa Claus.  Not wanting the children to be disillusioned, the family decides to dress Uncle Fester up in a Santa suit for the children.  But when Uncle Fester fails to arrive, Gomez, Morticia, Grandmama, Lurch, and even hairy Cousin Itt all take it on themselves to dress up as Santa.  Soon the Addams Family house is full of oddball Santacli (that's the plural of Santa Claus, right?) and sitcom hijinx ensue.
In many ways, this episode is a typically "heartwarming" Christmas TV show.  It features everything you would expect from such a thing, such as decorations, presents, Christmas music, and children having their faith in Santa reaffirmed.  The episode even breaks the fourth wall at the end, and has the Addams Family singing "We Wish You a Merry Christmas" directly in to the camera and the viewers at home.  Yet it is peppered with bits of the Addams Family's perverse humor that keep it from being too saccharine.
One of my favorite gags had Wednesday and Pugsley fanning the flames of the fireplace in anticipation of Santa coming down it (this bit was taken directly from a Charles Addams cartoon).  Another had Pugsley wanting a bow and arrow for Christmas, so he could shoot apples off of Uncle Fester's head.  Gomez tells Pugsley to be careful not to hit Fester's head, because "it will ruin your arrow."


Christmas elements of "Christmas With the Addams Family" include:
This is a great show to watch with your family during the holidays, and unlike many of the scarier Christmas horror movies I have been reviewing for the last few weeks, this is appropriate for family members of all ages, even the old people.