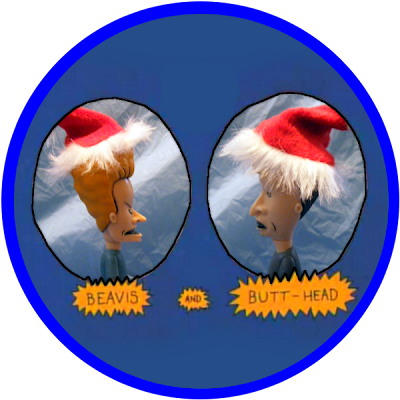 The packaging for these toys is very good.  The boxes are not sealed shut with tape, and everything slides in and out of them with ease.  That means you can take the toys out and play with them or display them, and then put them back in the box when you are done, without damaging the packaging.  That's perfect for people who want to play with their toys, and still want to collect them in the box.  This way you can do both.
The boxes for Beavis and Butt-Head are basically the same, except one has Beavis on it, and the other has Butt-Head.  They both feature lettering inspired by the cartoon, and scenes from the cartoon on the back of the box.  The sides of the boxes have drawings of nachos on them for absolutely no good reason, which is really dumb, but totally in keeping with the spirit of Beavis and Butt-Head, and therefore AWESOME.

The sculpt for these figures is very good.  The figures look just like the cartoons from certain angles.  From other angles they look kind of off, but I think that is due to the design of the cartoons.  Beavis and Butt-Head are almost always drawn in a few distinct angles, and they weren't really designed with 3-D in mind.  I think the sculpt for these figures is about as good as possible.
I also like the fact that even though both boys are dressed nearly identically in t-shirts and shorts, and they could have got away with using the same bodies in different colors and with different heads, they still sculpted each boy individually, with Beavis being skinnier than Butt-Head.
For the most part, the different colored pieces are molded in different colors of plastic, with just a bit of paint added to for their shoes, socks, and the details on their faces.  Unfortunately, the paint job on both figures is pretty bad.  Both figures have really bad paint jobs on their shoes and socks.  The paint is just slopped on, not following the lines on the sculpt, and the paint is rubbed off on both figures.  The paint on their faces is also irregular, with the lines being too thin in some spots, and rubbing off in others.

When I bought these figures, I thought they were going to be vinyl statues, with no articulation.  It turns out they do have three points of articulation.  Both of their arms move up and down, and their heads can turn from side to side.  It's not much, but these toys are not being marketed as action figures, so I think it's okay for what they are.

Both figures come with a base to stand on, which is good, because they are kind of top heavy with their giant heads, and would probably be falling over constantly without the base to stand on.

I bought these online at gohastings,com, and paid about $9.00 each, including shipping.  I think that's a pretty good price for these figures.