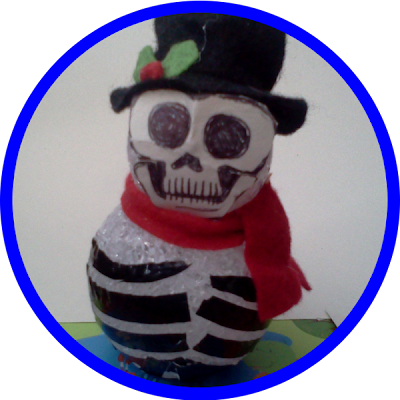 This Christmas I'm going to try and come up with some Creepy Christmas decorations for my home.  For my first project, I decided to convert some light up snowmen I bought at the dollar store into light-up skeleton snowmen.

The first thing I did was pull off his face.  I kind of felt like an evil little kid pulling the wings off of a fly.

Next, I made some "rib bones" for my skeleton using strips of black duct tape.  I first tried cutting it with scissors, but the tape kept sticking to the scissors, so I switched to a utility knife, and that worked much better.

Next up was the face.  I didn't think there was any way to slice the duct tape thin enough for his teeth, so I decided to draw the face on a piece of construction paper and glue it on to the snowman.

The finished product looks OKAY with the lights on...

...but he doesn't look very good in the dark with his flashing light effect.  Because his face is a solid piece of paper, it disappears into a silhouette.  And, honestly, his ribcage looks kind of sloppy, too.

I think I'm going to consider this to be my "first draft."  I'm going to revisit this in couple of days, and see if I can't make him look a little better.
Posted by Joshua Raymond at 12:00 AM

Email ThisBlogThis!Share to TwitterShare to FacebookShare to Pinterest
Labels: Christmas