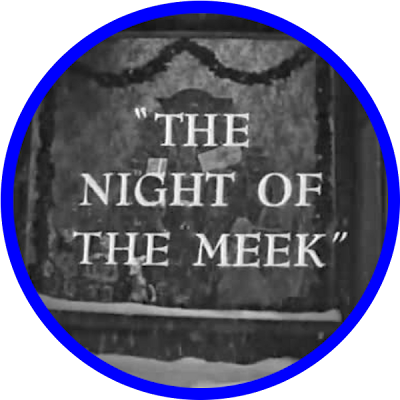 CREEPY CHRISTMAS
Twilight Zone - The Night of the Meek (1960) - TV review plus screencaps:
"The Night of the Meek," a Christmas episode of the Twilight Zone features this introductory narration from Rod Serling: "This is Mr. Henry Corwin, normally unemployed.  Who, once a year takes the lead role in a uniquely popular American institution, that of the department store Santa Claus, in a road show company version of "The Night Before Christmas."  But in just a moment, Mr. Henry Corwin, ersatz Santa Claus, will enter a strange kind of North Pole, which is one part the wondrous spirit of Christmas, and one part the magic that can only be found... in the TWILIGHT ZONE."
It features Art Carney as a drunken department store Santa Claus who discovers a magical sack that gives out the perfect present to everyone he encounters.  But what starts out as a "Christmas miracle" starts to take a sinister turn when...  when...  uhh... DAMN IT!  It never turns sinister!  It's just heartwarming holiday magic throughout.  Twilight Zone -- I expected better of you!  I'm trying to write about CREEPY Christmas stuff, and I thought the Twilight Zone would be perfect for that.  But, oh no, you had to go off and be cheerful and happy!  Thanks, for nothing, Twilight Zone!

Christmas elements in "Night of the Meek":

Posted by Joshua Raymond at 1:33 AM